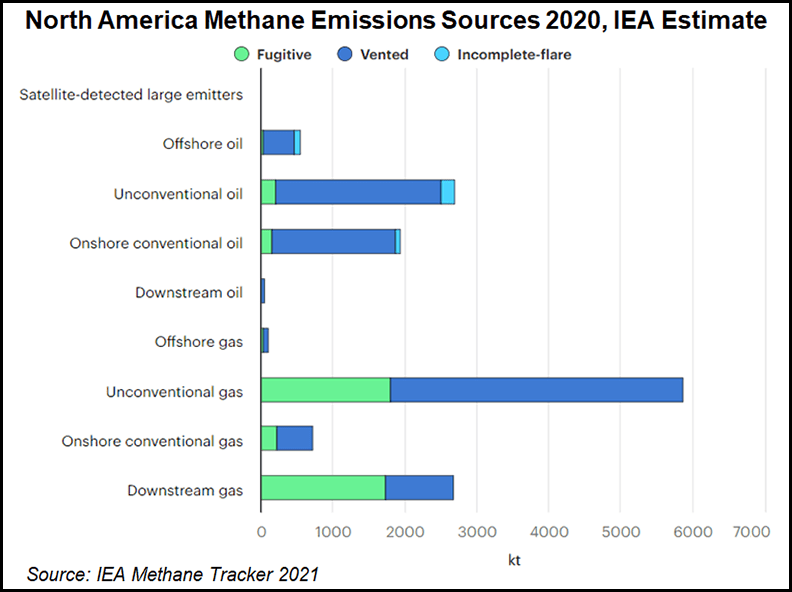 Curbing methane leaks from oil and natural gas operations would increase supplies pledged to Europe and help to reduce the impacts from climate change under a proposed rulemaking by the Biden administration.

The updated rulemaking issued Friday (Nov. 11) by the U.S. The Environmental Protection Agency (EPA) would impact thousands of natural gas and oil wells, natural gas processing facilities and storage tanks. Operators would be required to monitor and replace leaky equipment to reduce domestic methane emissions from covered sources by 87% in 2030 from 2005 levels.

“The United States is once again a global leader in confronting the climate crisis, and we must lead by example when it comes to tackling methane pollution – one of the biggest drivers of climate change,” EPA Administrator Michael S. Regan said. “We’re listening to public feedback and strengthening our proposed oil and gas industry standards, which will enable innovative new technology to flourish while protecting people and the planet.

“Our stronger standards will work hand in hand with the historic level of resources from the Inflation Reduction Act to protect our most vulnerable communities and to put us on a path to achieve President Biden’s ambitious climate goals.”

The more stringent rules were unveiled in Sharm el Sheikh, Egypt, at the 27th Conference of the Parties to the United Nations Framework Convention on Climate Change, aka COP27. The updates would supplement proposed EPA standards published one year ago, reflecting “input and feedback from a broad range of stakeholders and nearly half a million public comments.”

EPA said the rules “would promote the use of innovative methane detection technologies and other cutting-edge solutions, many of which are being developed and deployed by small businesses providing good paying jobs across the United States.”

The updates also include a groundbreaking Super-Emitter Response Program overseen by EPA that would require operators to respond to “credible third-party reports of high-volume methane leaks.”

The largest U.S. industrial source of methane is from oil and gas operations, EPA noted.

“Sharp cuts in methane emissions are among the most critical actions the U.S. can take in the short term to slow the rate of climate change,” officials said. “Oil and natural gas operations are also significant sources of other health-harming air pollutants,” including volatile organic compounds (VOC) and air pollutants such as benzene.

Taking into account the supplemental proposal and other measures in the initial EPA rulemaking, the proposed standards would reduce an estimated 36 million tons of methane emissions from 2023 to 2035, the equivalent of 810 million metric tons of carbon dioxide, according to EPA.

The agency also estimated that the updated rulemaking would reduce VOC emissions by 9.7 million tons from 2023 to 2035. Air toxics emissions, including chemicals such as benzene and toluene, would fall by 390,000 tons.

“These projections reflect new analysis of the costs and benefits of the proposed standards, which incorporates an improved modeling approach as well as updated estimates of the number of facilities covered by the supplemental proposal and the amount of methane and VOCs they emit,” said EPA officials.

Key features of the supplemental proposal would:

“The supplemental proposal includes requirements for considering the communities most affected by and vulnerable to oil and gas emissions, along with a demonstration of meaningful community engagement as states develop their plans,” officials said.

Total net climate benefits are valued at $34-36 billion from 2023 to 2035, equivalent to about $3.1-3.2 billion a year, after taking into account the costs of compliance and savings from recovered natural gas, EPA said.

EPA is taking comments on the supplemental proposal until Feb. 13, with a final rule expected sometime in 2023.

President Biden urged the COP27 delegates in Egypt to increase their climate commitments, even as the Russian war in Ukraine has increased food shortages and global inflation.

“Russia’s war only enhances the urgency and need to transition the world off its dependence on fossil fuels,” Biden said. “To use energy as a weapon to hold the global economy hostage must stop.”

Earlier this year, Guilbeault said he was committed to working with the Canadian oil and gas industry to identify pathways to achieving net-zero emissions by 2050. Canada has made a commitment to reduce methane emissions by at least 75% by 2030. Environment and Climate Change Canada published a proposed framework outlining the main elements of the new regulations, with the draft to be published early next year.

“We welcome Canada’s deep commitment and ambition in tackling methane emissions,” Kerry said. “Cooperation on methane between the United States and Canada is, and will continue to be, a valuable tool in cutting emissions in our respective countries and around the world.”

“API looks forward to reviewing the proposed rule in its entirety and will continue to work with EPA in support of a final rule that is cost-effective, promotes innovation and creates the regulatory certainty needed for long-term planning,” said API’s Frank Macchiarola, senior vice president of Policy, Economics and Regulatory Affairs. “Federal regulation of methane crafted to build on industry’s progress can help accelerate emissions reductions while developing reliable American energy.”

AXPC CEO Anne Bradbury said, “While we are still digesting the full proposal, at the onset we appreciate EPA’s inclusion of many of the recommendations we made for needed changes and clarifications for upstream. We still have concerns that should be addressed to make key provisions truly workable, but we will continue to work with EPA on meaningful solutions.”

GEI President Marty Durbin said the Chamber “supports smart, balanced regulations and voluntary actions to reduce methane emissions from the oil and gas sector, and we will work with EPA to help develop an effective final rule.

“Regulations should encourage innovation and the improvement of technologies to measure and reduce emissions while ensuring our energy security through continued development of our natural resources.”
The Chamber also supports “reducing methane emissions beyond our borders through the Global Methane Pledge,” Durbin said. More than 100 countries pledged last year to voluntarily reduce methane emissions from 2020 levels by at least 30% by 2030.

“America’s oil and natural gas industry provides reliable and affordable energy to power our economy and to support our allies and does so with some of the lowest emissions intensity in the world.” Durbin said. “As we review the details of the proposal, we are particularly interested in how it will interact with the methane fee provisions of the Inflation Reduction Act.”

“The Biden administration is continuing to advance the ball on these crucial standards,” said EDF’s Jon Goldstein, senior director of Regulatory and Legislative Affairs. “Cutting methane pollution from the oil and gas industry is one of the most immediate and cost-effective ways to slow the rate of global warming while improving air quality and protecting public health.”

EDF estimated that the U.S. oil and gas industry emits 16 million tons/year of methane. Reducing natural gas waste from leaks and flaring “could provide over half of the 50 billion cubic meters/ year of natural gas that the Biden administration has pledged to our European allies to address the energy crisis brought on by the Russian war on Ukraine,” EDF noted.