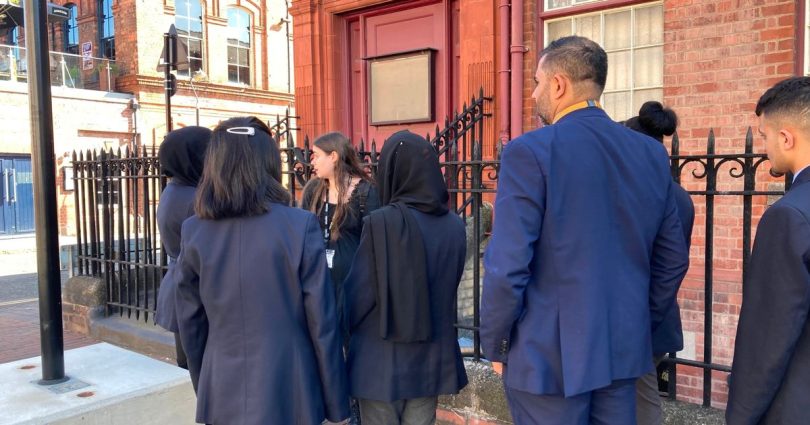 From Muslim graves buried in a Christian cemetery to ancient Aboriginal ties. Refugee students from across the world were taken on a tour by a local historian of the hidden gems in the heart of the Jewellery Quarter in celebration of Refugee Week.

Students from J ewellery Quarter Academy were joined by governor and historian Josie Wall to walk along historical routes from the Warstone Cemetery to the iconic Chamberlain Clock. The school has been accredited as ‘Refugee Welcome’ with over 40 different languages spoken by pupils.

Around five students from countries like Afghanistan and Ukraine took part in the ‘Refugee Walk’ through the Jewellery Quarter stopping at different places to discuss the stories of migration and world connections like Warrulan’s Grave located in Warstone Cemetery.

Read more: One daughter’s journey to Pakistan brings together memories of migration, integration, loss and identity

Warrulan was an aborigine who came from South Australia to Birmingham in 1844 between the ages 10 and 12. He was brought by English explorer Edward Eyre with the intention of him integrating in a ‘civilised’ British society.

As the students listened closely to these stories of those in Jewellery Quarter’s rich history, Josie Wall who is part of the Jewellery Quarter Cemeteries Project explained the meaning behind each gem.

She told BirminghamLive : “Through working on heritage projects in the Jewellery Quarter I have been able to work with the school and be a governor. Their history is all around them and I would like to teach them a few things so they can get to know where they are.

BirminghamLive’s exclusive Commonwealth Stories podcast speaks to people from all corners of the world, from from Africa to Asia, from North America to the Caribbean – who’ve made a home in the West Midlands.

The series will bring you inspiring stories and insights of gold medal winning athletes to local business owners, teachers and care workers. But most importantly asking questions like what the Commonwealth means to us today and what legacy will the Games coming to Birmingham have.

Commonwealth Stories is available on all your favourite streaming platforms, including Spotify and Apple Podcasts. To keep up to date with the series, make sure to follow and subscribe.

“Some of these things will be a big surprise to the children and it will be really nice to see them get involved,” she added.

One of the places that came of surprise to the students was the Muslim graves hidden away in the Key Hill Cemetery, a Christian burial place. Three Indian Muslims were buried in the area during the 1940’s after suffering an air raid accident when a wall of sandbags collapsed.

The walk marked Refugee Week which is between 20th June to 26th June with events taking places across the city.

Stay abreast with the very latest from with our Birmingham News Email Updates.