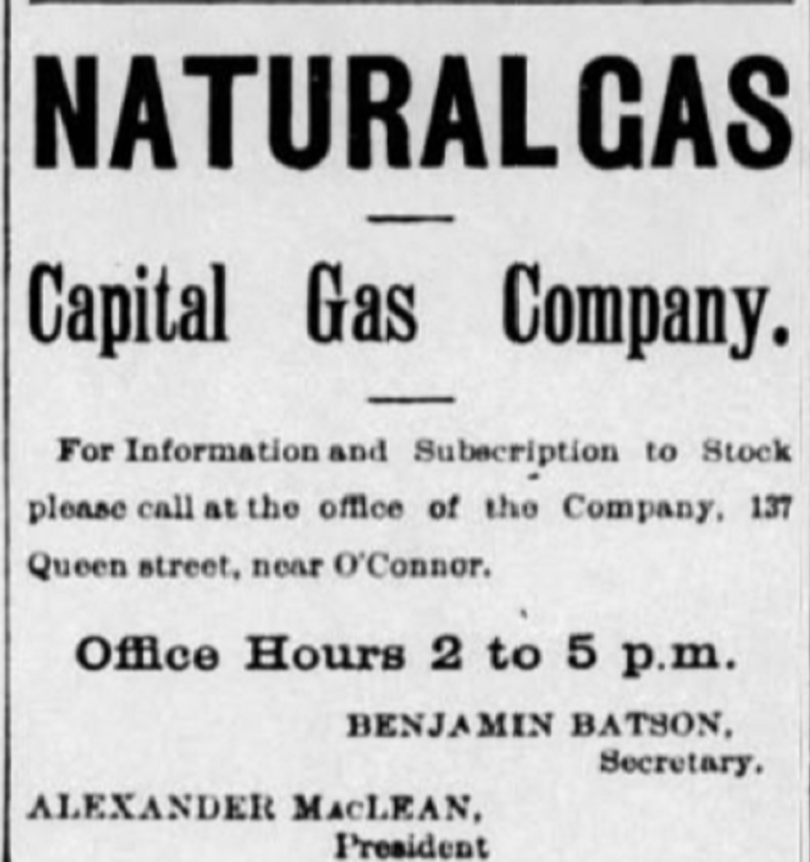 The story behind Ottawa’s supposed oil and natural gas boom began to the east of the city some months earlier at La Mer Bleue, a bog situated roughly thirty kilometres east of the capital, today owned by the National Capital Commission.

CityNews, in partnership with the Historical Society of Ottawa, brings you this weekly feature by Director James Powell, highlighting a moment in Ottawa’s history.

Oil! Black gold was gushing in a powerful stream at a well dug just a couple miles south of Parliament Hill.

Dollar signs must have danced in the heads of Ottawa residents at the rumour. Even in those days before the automobile, the demand for petroleum products, such as kerosene, was strong. Fortunes had been made at Black Creek, subsequently known as Oil Springs, in Lambton county in southwestern Ontario when oil had been discovered in commercial quantities in 1858, and in nearby Petrolia a few years later.  Vast amounts of money were also being made in Pennsylvania where oil had been first struck in 1859, followed by copious amounts of natural gas in the 1880s. There was so much gas that it was being piped unmetered to factories and homes in Pittsburgh. In the process, clean-burning gas displaced dirty coal transforming the once grimy and sooty city—at least until the gas wells started to lose pressure. There was no mechanical means of pumping the gas through pipelines; everything relied on natural pressure.

Ottawa’s “oil strike” occurred 17 on Sept. 17, 1889 at a bog on Tom Hickey’s property on the border of Stewarton and the Glebe (roughly today just south of the Queensway, east of Bank Street). Here, a company had been digging an exploratory well for natural gas. A Citizen journalist rushed out to cover the event. He found that “there was more gush about the report than about the well.” Instead of seeing black gold spewing from the 72-foot high drilling derrick which had been installed at the site, he was shown a small bottle of oily liquid by Alderman Askwith, one of the shareholders in the drilling company, who had also excitedly rushed out to the site on hearing the news. It wasn’t much. One skeptical observer remarked that “ten cents worth of kerosene would produce the present appearance.” Excitement quickly turned to disappointment.

The story behind Ottawa’s supposed oil and natural gas boom began to the east of the city some months earlier at La Mer Bleue, a bog situated roughly thirty kilometres east of the capital, today owned by the National Capital Commission. Reportedly, somebody had discovered natural gas emanating from the Mer Bleue bog. When a match was applied, the gas burnt. Most likely, the person had found methane leaching from rotting plant material.

Investors convinced themselves that the gas was available for tapping in profitable amounts. They purchased 300 acres of land in Gloucester Township out on the Montreal Road, including the Mer Bleue property, for $22,000. If sufficient gas at a satisfactory pressure was found, they envisaged two pipelines being laid to Ottawa to carry gas for heating and lighting at an estimated cost of about $300,000. An expert from the Pittsburgh Natural Gas Company was called in to investigate the prospects of the venture.

In late 1887, the investors formed the Capital Gas Company, and was granted a by-law, No. 805, from Ottawa City Council to allow them to dig up the roads to lay pipes to bring natural gas into the city. They expected the project would be finished within two years.

The principals of the company included Mr. G.B. Pattee of Perley & Patee, the lumber company, Mr. Maclean of Maclean, Roger & Company, Mr. Thomas Wallace and two American entrepreneurs, Charles Cammann, a New York banker, and H.W. Mali, a New York merchant. After travelling through the gas-producing regions of Pennsylvania and Ohio, Mr. Wallace was so confident of the natural gas prospects at the Mer Bleue property that he bought the necessary equipment for drilling and made arrangements for skilled drillers to come to Ottawa. He and his fellow investors hoped that the availability of natural gas would make Ottawa the commercial capital of Canada as well as its political capital. It would also make them very rich men if it panned out.

With natural gas still to be discovered in appreciable quantities, another group of investors, led by Henry Bate, George McCullough and William Scott, entered the fray, seeking and receiving similar privileges (by-law No. 809) from city council for their company, the Ottawa Heating & Lighting Company, to lay down pipes on Ottawa’s streets. It was later called the People’s Gas Company or the Citizens’ Gas Company. This set off a battaille royale. Wallace, the spokesperson for the Capital Gas Company, was outraged, saying that Council had broken faith with his company. He thought that he had received a two-year monopoly with his by-law, and that on this basis he had already invested considerable money into the venture. He contended that Ottawa was too small to support two natural gas companies. He also thought that the second company was just trying to block his Capital Gas Company. This charge was not far-fetched as the Bate family was connected to the Ottawa Gas Company, the city’s manufacturer of coal gas which stood to be the big loser should cheap natural gas be piped in from nearby wells.

The by-Law committee of city council threw up its collective hands over the issue, and rescinded both companies’ by-laws on the grounds that neither company had been incorporated. Instead, it offered to grant permission to lay underground pipes to transport natural gas through city streets to the first company to be properly incorporated.

The Capital Gas Company received a Dominion charter mid-March 1888. It thought it had won the incorporation race and deserved its exclusive two-year by-law to bring natural gas into Ottawa. Not so fast said the Bate company, now called the People’s Gas Company. Using legal sleight of hand, Bate and his associates had purchased and resuscitated an existing company established in 1881 called the Rideau Gas Company which they argued already had a city By-law, No. 506, which gave it permission to dig up Ottawa’s streets to lay gas pipes. This forgotten company had actually been established to erect tower lights in Ottawa. But under the Ontario law of the time, it had the right to engage in both the electric and gas businesses, though it had no intention in 1881 of engaging in the latter activity. When the tower lighting concept failed, the company went dormant.

City council laughed at this corporate manoeuvre. The Ottawa Journal called the proceeding a “gas farce.”

All this corporate and legal scheming occurred against the backdrop of one big hurdle—little gas had actually been discovered in the Ottawa area. But the dream, or the delusion, was enough, encouraged by vague statements by experts who cautiously thought that natural gas might be found in Ottawa. For example, in early February 1888, Dr. Bell of the Geological Survey opined that Ottawa conditions were favourable for the discovery of gas, at least to justify some expenditures to prove it. News of a gas strike in Collingwood also wetted investors’ appetite. Maybe it was Ottawa’s turn next.

By June 1888, the Capital Gas Company appeared to have beaten its rival. But as the Journal commented, “all the energy of the Capital Gas company seems to have been used up by its campaign to get its by-law.” There was no actual boring.

The corporate saga didn’t end there. The principal shareholders of Capital Gas had a falling out. When in late December 1888, the People’s Company again sought permission to bring natural gas into Ottawa, Ottawa City Council looked favourably on the request as it has received news from President Alexander McLean and Secretary Benjamin Batson of Capital Gas that their company would not object. Wrong. Wallace and the two New York shareholders of Capital Gas objected vigorously, and sent a letter under the company’s seal to that effect to Ottawa City council. President McLean retorted that Wallace had left for the United States and had improperly taken the company’s seal and records.

Boring for natural gas did finally begin by December 1888. But who did the drilling was not clearly reported though it was most likely the Capital Gas Company.  However, instead of drilling at La Mer Bleue, test drilling commenced in Stewarton at the Hickey farm just a short distance from Parliament Hill. Later reports said that drillers were drawn to the spot by an oily scum found on the surface of a bog on the Hickey property. Given its proximity to downtown Ottawa relative to the Mer Bleue site, a successful well would have been very attractive commercially as there would be no need for laying expensive pipes across miles of countryside.

The first boring attempt at Stewarton failed when the drill, which was operated by a steam engine run by four men, hit quicksand. The derrick was moved to another site. But by April 1889, drilling at the new location had reached the 70-feet mark. Investors hoped to strike gas at a depth of about 800 feet. Drilling continued. After boring through shale at a rate of 40 feet per day, the drillers hit salt-water impregnated coal and stalled for a time. The team struck “oil” at about 1,200 feet mid-September. But the bore hole filled with water as the bottom portion of the well had not been encased, allowing ground water to leak into the well.

Alderman Askwith thought that there was definitely oil mixed with the water in the sample taken from the bore hole. “But to say that we have ‘struck oil’ in any quantity would be a venturesome statement.” He thought the company would continue to drill down to about 2,000 feet, the limit of the equipment, in its search for natural gas. If nothing was forthcoming, they would investigate further the oil find.

The last report on the Stewarton drilling was in mid-November 1889 when a Citizen article reported that drilling would resume “in a few days” after $6,000 had been spent on the exploratory well. Nothing apparently happened. Ottawa’s oil and gas boom was over before it had really begun.

Roughly forty years later, an account of the drilling activity by an elderly man who had worked on the well was published in the Ottawa Citizen. That article stated that the drilling had ceased after nine months at about the 1,800-foot mark when the well hit sulphur water. The well wasn’t a total failure, however. So strong was the water pressure that the sulphur water apparently came to the surface and continued to flow. A pipe was installed, with people coming far and wide to drink the water. Not only was sulphur water prized for its supposed medicinal value, it must have been of far better quality that the water the city piped in to residents from the grossly polluted Ottawa River.