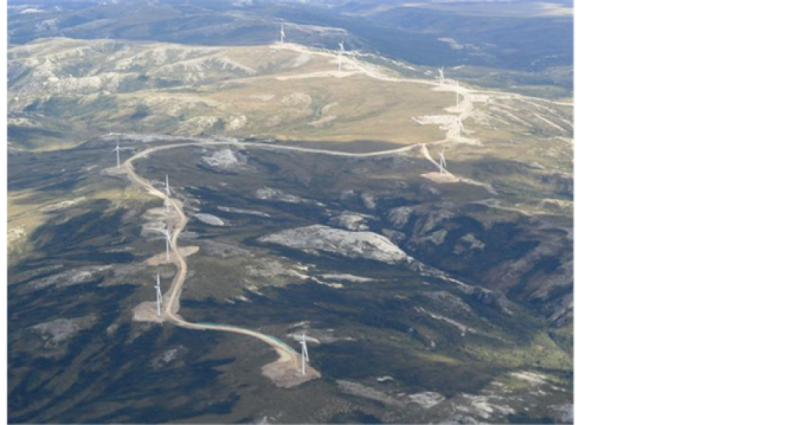 The owners of a Fairbanks-based renewable-energy company propose building what would be the two largest wind farms in Alaska. If they get the go-ahead, they plan to sell power to Golden Valley Electric Association in Fairbanks, and Chugach Electric Association, in Anchorage.

Andrew McDonnell and his Nevada-based business partner founded Alaska Renewables two years ago, and a few months later they proposed building what would be the state’s biggest wind farm for Golden Valley Electric Association.

“Alaska Renewables’ was one of the eight proposals that was submitted in response to the request for information related to renewable projects that we put out,” says Meadow Bailey, Golden Valley’s spokesperson.

Bailey says the RFI was issued to gather information on renewable-energy technologies that would integrate with the co-op’s system and reduce its carbon emissions. Golden Valley officials subsequently concluded that smaller-scale projects wouldn’t meet those requirements, so McDonnell followed up with a second proposal: to develop Alaska’s two biggest wind farms, one near Fairbanks and another near Anchorage.

“These two projects would by far be the largest renewable energy projects built on the Railbelt,” he said, “and so these would be a big step toward de-carbonizing the energy system on the Railbelt.”

The Fairbanks-area project would be built on a site that would be built land leased from the state near Murphy Dome. A state Department of Natural Resources lease document says Shovel Creek Wind, an Alaska Renewables subsidiary, seeks up to 2,700 acres for the project. McDonnell says it could accommodate up to 60 wind turbines and produce up to 200 megawatts. That’s eight times more energy than Golden Valley’s Eva Creek wind farm near Healy, which is currently the state’s biggest.

Alaska Renewables subsidiary Little Mount Susitna Wind seeks to lease up to 450 acres in an area about 40 miles northwest of Anchorage where the firm seeks to build a wind fame with 80 turbines that would produce generate up to 250 megawatts.

“We’ve begun environmental assessments, and will initiate permitting in the coming activities,” he said. “And we are also measuring the wind speeds at the different locations so we can quantify how much energy we expect to produce from the sites.”

McDonnell says data from those studies and others will be submitted to the state, which will develop a draft plan and seek public comment on the leases, probably early next year. He says the data also will be needed if Golden Valley moves ahead and issues a higher-level solicitation called a request for proposals, or RFPs.

“We do plan to submit a proposal for that,” he said. He expects Golden Valley will issue an RFP by the end of the year.

Bailey, the co-op’s spokesperson, says that’s still up in air. But she says the co-op has kept in touch.

“We have had conversations with them along with other entities that responded to the RFI since that time, as we’ve looked at what kind of projects might be on the horizon,” she said.

McDonnell says Chugach already has issued an RFP for renewable power. But he says Chugach and Golden Valley both have more engineering studies to complete before their boards will make a final decisions on the projects.

“And that’s a precursor towards negotiating a power-purchase agreement,” he said.

Both Bailey and a Chugach Electric spokesperson say the utilities want more renewable power that won’t increase their members’ monthly bills. McDonnell says his project will deliver that, in part because its wind turbines are much more efficient and reliable than those at Eva Creek, built 10 years ago. And he says federal grants and tax breaks will hold down upfront costs.

“The cost of wind energy has declined substantially over the last decade,” said McDonnell, a former associate professor oceanography at the University of Alaska Fairbanks. He says and his business partner, Matt Perkins, an engineer, are both strong believers in renewable energy.

McDonnell says if the utilities select his projects, he hopes to get them built and online within three years.