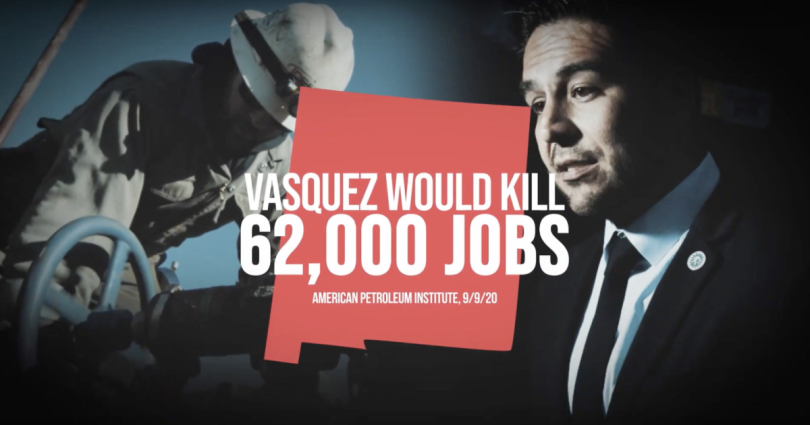 The fight for New Mexico’s 2nd Congressional District is getting fiercer. As Democratic challenger Gabe Vasquez squares up to Republican incumbent Yvette Herrell, the Albuquerque Journal reports national groups from both sides have released attack ads.

The paper reports one Democratic ad criticizes Herrell for supporting a law last year that would effectively criminalize all abortion, with no exceptions. Herrell has since said she supports the procedure in cases of rape, incest and to protect the life of the mother. Another ad shows Herrell standing in front of a car with a Confederate flag on it and calls her extreme. It says she’s against justice for police officers who served at the Capitol on January 6, 2021, citing her vote against creating the commission investigating those events.

And then one Republican ad claims that Vasquez would, quote, kill 62,000 New Mexico oil and gas jobs. Journalist Jerry Redfern at Capital and Main has dug into that claim and spoke to KUNM reporter Alice Fordham.

JERRY REDFERN: The number comes from the American Petroleum Institute that funded a study from an energy group to try to figure out how many jobs could be lost if President Biden implemented what was at the time called a leasing pause. It has nothing whatsoever to do with Gabe Vasquez, and the Congressional District 2 here in the state of New Mexico. In fact, it’s a study that came out a couple of years back, and it’s in pretty much every way, shape and form been proven incorrect.

KUNM: So how many people do work in the oil and gas industry in New Mexico?

REDFERN: It’s a bit of a rough number to figure out because the state of New Mexico actually jumbles a bunch of different jobs together, instead of pulling out, you know, singularly reporting on just oil and gas jobs. It’s somewhere in the neighborhood of 20,000, 21,000 jobs, currently directly working in the oil and gas sector.

KUNM: Okay and what does that represent as a percentage of jobs in New Mexico? How important is that number?

REDFERN: Those are actually two different, very different, questions. So as a percentage, it’s a small percentage, but those jobs are actually pretty important. I mean, one they generally pay above average, and often very far above average, for what people normally get in jobs in New Mexico. And the other thing is, those are the jobs in many ways that support the oil and gas industry itself, which makes up a huge proportion of the state’s GDP. There’s not a huge number of jobs there, but they play an outsized role.

KUNM: And they fluctuate somewhat, right? As the whole energy industry does?

KUNM: So if this Republican-supporting group is exaggerating the number of fossil fuel jobs, oil and gas jobs in New Mexico, what does that mean? Why do they do that?

REDFERN: I think this gets back to what I was just talking about that these jobs are actually pretty important. It’s not clear, though, I think, how steady and stable those jobs are. There’s the whole history that we have of, you know, the boom and bust economy that comes along with our fossil fuel industry. But there’s also the real fear that I think a lot of people reasonably have that going forward, those jobs aren’t going to be sustainable because of the climate crisis that we’re all facing. I mean, we have to wean ourselves off of oil and gas consumption the way that we’ve been doing it, and we have to do it as quickly as humanly possible. And that is going to affect oil and gas jobs. And I think that a lot of what we’re seeing is playing on those fears.

KUNM: There’s two parts of the claim in the ad, there’s the number of jobs that would be lost. And then there’s this claim that Gabe Vasquez the Democratic candidate in the 2nd Congressional District would kill those jobs. We know that Vasquez has worked as a conservationist, he worked with Senator Martin Heinrich, who’s big on renewable energy. What do we actually know about Vasquez, his policy on these jobs?

REDFERN: He has said that he’d like to phase these jobs out. But I think the key point is, he’s talking about it in ways that essentially, yes, he wants to phase out oil and gas production and oil and gas jobs. And he has a big “but” that goes along with that, which is he wants to make sure that all of those people whose jobs are being phased out in oil and gas have equally good jobs in other industries after that happens. Or that they’re not left hanging by this transition. I know this is something that an awful lot of politicians are paying a lot of attention to, from the governor’s mansion through the Statehouse and obviously now through federal elections as well.