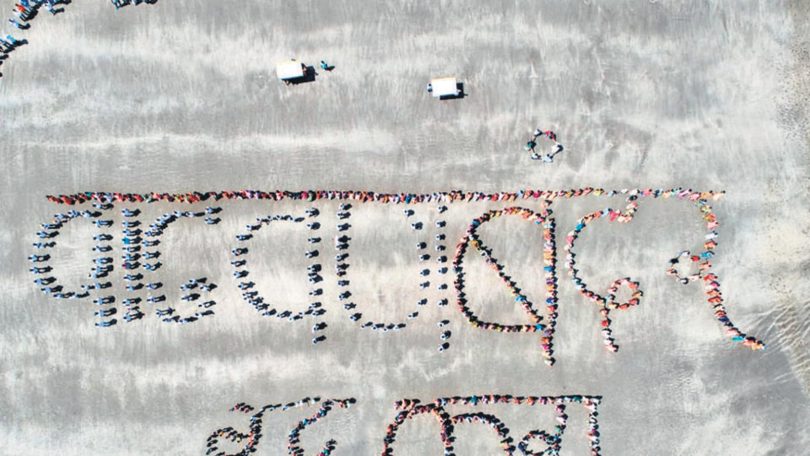 Mumbai: Thousands of fisherfolk, farmers and adivasi residents of villages across the Konkan poured into the streets on Sunday to protest against the proposed Vadhavan Port in Palghar district’s eco-sensitive Dahanu taluka. Resistance from these communities has been hotting up in light of recent developments and statements by deputy chief minister Devendra Fadnavis who has vowed to pursue the port’s development aggressively.

In Mumbai, activities were suspended at the city’s busiest fish landing centre, Sassoon Dock, while fish markets at Crawford Market and Cuffe Parade, usually bustling on Sundays, also remained shut in protest. Demonstrations were held by fisherfolk at Narpad, Vadrai, Vasai, Uttan, Satpati, Tarapur and at Mahim Koliwada in the city, extending as far south as Tarkarli beach in Sindhudurg district.

An estimated 8,000 people formed multiple human chains between Dahanu to Chinchani in Palghar. A common refrain resonated in the slogans and placards at these protests: “Ekach zidd. Vadhavan Bunder radd kara (Only one demand. Cancel Vadhavan Port).” HT was the first to report, on September 20, that the project is anticipated to officially impact over 20,000 livelihoods in 16 fishing villages. Unofficially, fishers say the number could cross over one lakh.

The development of Vadhavan Port was first rejected on September 19, 1998, by the Dahanu Taluka Environment Protection Authority (DTEPA), a 1996 Supreme Court-appointed body set up to regulate industrial and other activities that could pose a threat to the Dahanu eco-sensitive zone (ESZ), officially declared “ecologically fragile” in 1991. The development proposal was put forward by an Australian company, P&O Ports Pvt Ltd, which has since opted out of the project.

After considering the views of environmentalists and locals, the DTEPA concluded that the construction of a port at Vadhavan would be “wholly impermissible and… illegal”, a stand that was reiterated in 2017 under the aegis of its former chairperson, retired high court judge Justice Dharmadhikari.

Concerns over the project’s revival were bolstered in April 2020 when the Central Pollution Control Board declassified ports, harbours and jetties as “industrial activities”. Two months later, the MoEFCC issued a clarification stating that these activities would be permitted in eco-sensitive areas, including the Dahanu ESZ. This move drew the ire of locals, eventually leading to a National Green Tribunal (NGT) order in June 2021, staying any further work on the port’s planning and construction. The green court also directed the MoEFCC to form an expert committee to reconsider whether ports and harbours could be permitted as non-industrial activities within ecologically fragile areas.

Eventually, on the basis of a report from the National Centre for Sustainable Coastal Management — which is not publicly available — the MoEFCC on May 26 this year “reclassified” the list of regulated activities in the Dahanu taluka ESZ to allow the construction of ports and harbours.

In October 2020, it had granted the project’s new administrator, JNPA, terms of reference for a fresh design which is 400% times the size proposed by P&O in 1997. As per JNPA’s detailed project report, approximately 3,496 acres of land will be reclaimed from the Arabian Sea for Vadhavan Port, as against the 702 acres for which the DTEPA had denied permission.

Environmentalists have criticised the MoEFCC for its May 26 office memorandum, which has been passed while the matter is still sub-judice. “This is an attempt to negate the NGT’s stay on the port’s construction, and the DTEPA’s original 1998 order, which has not been challenged by any party before any court, and stands final,” said Debi Goenka, executive trustee, Conservation Action Trust. “The new chairman of the DTEPA, who was appointed after a gap of three years, has been passing orders without consulting the other expert members which is another matter of concern,” he added.

The MoEFCC’s application to scrap the DTEPA, which is says “may no longer be necessary” as newer regulations and authorities are in place to protect coastal areas, is currently pending in the SC.