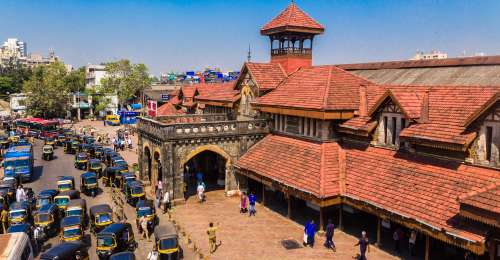 A Grade I Heritage structure, Mumbai’s Bandra west railway station, one of the busiest stations on the Mumbai suburban rail network, has finally been restored and is slated to be formally inaugurated by the month’s end. The station is a stop for Mumbai locals and outstation trains and is serviced by the Western Railway and the Harbour Line of the Central Railway intra-city trains.

The restoration work was carried out under Western Railways’ aegis and architecture company Abha Narain Lambah Associates. This is the second time restoration work has been done on the station; the previous one was in 2008. The redevelopment was done at the cost of around Rs 12 crore. It boasted several new amenities, as well as the restoration of the red-tiled roof, repairing of damaged woodwork, and polishing of the wood framework of the main station building, redoing the booking windows, repair of the stained glass, and replacement of the four cast-iron finials, which had gone missing, etc.

In the 1800s, Bandra railway station, which was then maintained by the Bombay, Baroda and Central India Railway (BB & CI), used to be a cargo halt. A meat cargo train, later discontinued, was used to haul the products from the slaughterhouse situated at the Bandra-end of the Mahim Causeway in the three buildings created for the purpose by the municipal engineer Russel Aitkin. Later, as the sleepy suburb of Bandra grew, two platforms were added, and the station was named Bandora, local speak for the Persian word bandar or port/bay/harbour. The BB & CI also used to run a special train to Bandra during the Festival of Mount Mary every September.

In Line For More

Many other stations across the country are in line to be upgraded/restored/repaired in keeping with the order of the Ministry of Railways’ order to upgrade Indian Railways’ infrastructure. This is being done via the Rail Land Development Authority (RLDA), Indian Railway Stations Development Corporation Limited (IRSDC), and similar agencies.

ALSO READ: Sail Down The Ganges In A Restored Colonial Era Paddle Steamer