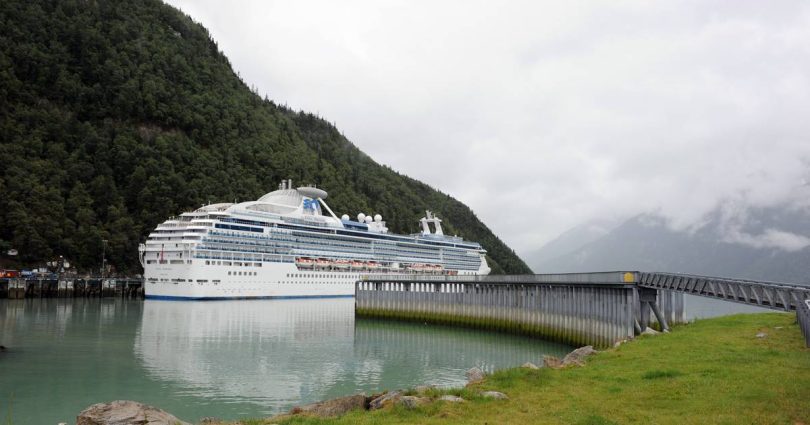 A rockslide early Thursday closed the cruise ship dock in Skagway, prompting one vessel to skip that port altogether.

Part of the dock was damaged during the slide just before 6:30 a.m., according to Jacqui Taylor, a spokeswoman for dock owners White Pass & Yukon Route Railway. No one was injured as the slide sent rock, dirt and vegetation tumbling from a mountainside above the dock.

There were no passengers disembarking at the time, Taylor said. The railway’s geotechnical engineers were assessing the damage Thursday afternoon.

Four cruise ships scheduled for the pier made alternate plans Thursday, the company said. The Royal Caribbean Quantum of the Seas, which can hold nearly 5,000 passengers, diverted from Skagway on Thursday morning. The Discovery Princess, with a maximum capacity of about 4,600, repositioned and planned to transport passengers to the small-boat harbor by tender.

About a dozen cruise ships use the dock every week to call on the Southeast Alaska city popular for historic buildings preserved as part of the Klondike Gold Rush National Historical Park. The railroad runs vintage locomotives out of Skagway.

“White Pass and Cruise Line Agencies of Alaska are working with our cruise partners to reaccommodate the ships scheduled for this weekend,” Taylor wrote in an email. “Ships are able to tie up on the south end of the Railroad Dock and tender guests a short distance to Skagway’s Small Boat Harbor.”

The Municipality of Skagway Borough does not own the dock and was not participating in the response to the slide as of Thursday, according to borough manager Brad Ryan.