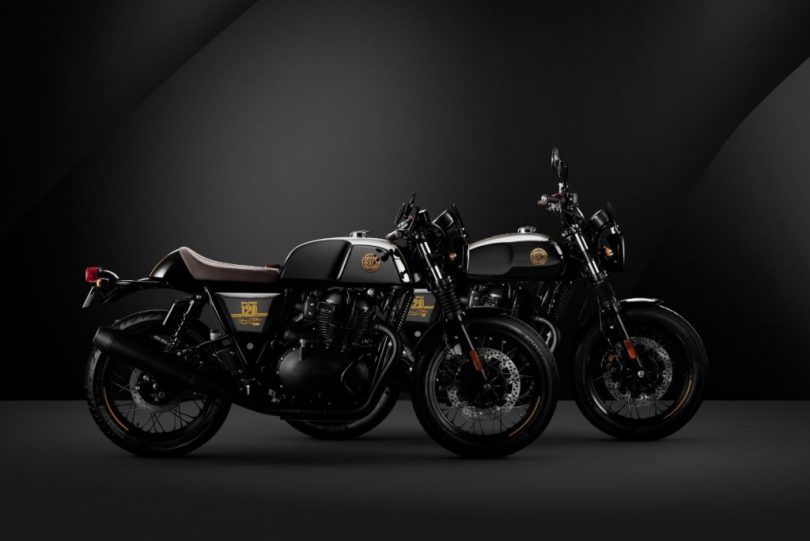 Back in 1901, Royal Enfield revealed its first motorbike which was designed by Bob Walker Smith at the Stanley Cycle Show, London. It’s already been over 120 years since then and here we are celebrating the brand’s massive success. To make it more exciting, the Indian manufacturer has showcased the all-new 120 Year Edition of both Interceptor and Continental GT 650 at the EICMA, 2021. Surprisingly, these bikes are limited-run and therefore, only 480 units will be available globally.

Royal Enfield has also confirmed that both the bikes will be launched in India soon. Well, this way, around 120 units are expected to be sanctioned for the Indian market. Planning to own a limited edition 650 twin? Check out all the details related to them down below.

Unlike the regular models that are available with bright colour shades, the ‘120 Year Edition’ bikes will use a Chrome Black colour scheme. To enhance the overall stance, Royal Enfield has also introduced handmade brass badges on the fuel tank that looks absolutely premium. Further enhancements in the form of a brown coloured seat, blacked-out engine, darkened wheels and similarly treated mirrors are also there to retain its exclusivity.

Thankfully, there are no performance or mechanical upgrades and therefore, we can conclude that all the changes are limited to cosmetic ones. As mentioned by Royal Enfield, only 480 units of both Interceptor and Continental GT 650 120 Year Edition will be available globally. In India, around 120 units are about to arrive with the deliveries expected soon. The bike manufacturer has even confirmed its launch date on 6th December 2021.

The manufacturer claims that no mechanical changes have been made to these special edition bikes. Well, this way, the 120 Year Edition also comes with the old 648cc twin-cylinder engine. Now, talking about the overall output, this unit is capable of churning out a decent 47HP and 52Nm of peak torque while being paired to a 6-speed gearbox.

In India, both the bikes compete with the all-new Kawasaki Z650RS and Triumph Trident 660. Want to learn more about the Z650RS? Check out all the details related to it down below.

Royal Enfield 650 twins were definitely ruling the middleweight segment, all thanks to the aggressive pricing that made them accessible to the masses. Well, to compete with them, Kawasaki has pitched their new Z650RS with a price tag starting at Rs.6.65 Lakhs (Ex-showroom, Delhi). For your information, it comes powered by a potent 649cc twin-cylinder engine that churns out a massive 68PS and 64Nm of peak torque. Feature-wise, the all-new Z650RS comes equipped with a host of features including all-LED lighting, MID screen and dual dial instrument console to name a few.