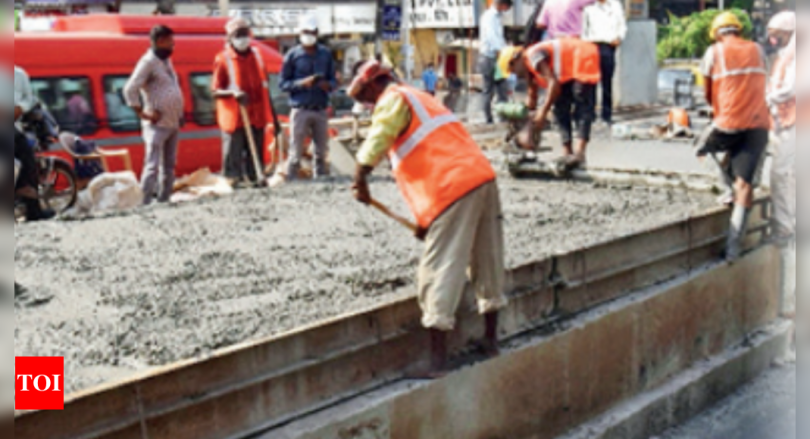 MUMBAI: The bids invited from five companies for Rs 5,800 crore cement-concretisation works for 400km of city roads – more than twice the Rs 2,000 crore the BMC spends on an average annually on repairs – are the largest in quantum so far. The last big tender issued by the BMC was for the Mumbai Coastal Road project for Rs 12,000 crore in 2018.

Following a diktat from chief minister Eknath Shinde last month that all roads should be cement-concretised by 2024 to eradicate the pothole problem, the BMC on Tuesday had invited bids from five companies for Rs 5,800 crore works for 400km of roads. Civic officials said cement concrete roads usually have a 90% lesser chance of developing potholes.
The BMC plans to issue the work orders after monsoon and start work before the year end. All these road works are to be completed within 24 months of the work order. After completion of the works, the company’s liability period will be for 10 years and 20% of the road works payment will be retained so that these are properly maintained and repaired during the fault-liability period.
BJP leader and former BMC corporator Vinod Mishra said he plans to check with the civic authorities what kind of a road map they have prepared for implementation of such a large quantum of road works. “Also there is a need to fix accountability so that in case of cracks developing on any of the newly constructed roads, the BMC must be able to point out whose to be be blamed for the quality of the road not being on a par,” said Mishra.
Samajwadi leader and MLA Rais Shaikh expressed concerns over the speed at which the BMC came out with the tenders. “Was a survey conducted to identify which roads required to be concretised? If recently repaired roads are taken up for concretisation, it would be difficult to know. The BMC administration should be transparent in the manner in which the 400km roads were selected,” said Shaikh.
All road tenders would be cleared by the BMC administrator I S Chahal as there is no standing committee since the term of the BMC ended in March 2022.
Officials said barricades around road repair works will have QR codes. By scanning these, one can get detailed information on road repair while actual works are underway. Roads will also be designed keeping in mind needs of the differently abled. The tender condition will make it mandatory to build separate underground passageways for utility service channels so that there is no need for frequent trenching for such works.