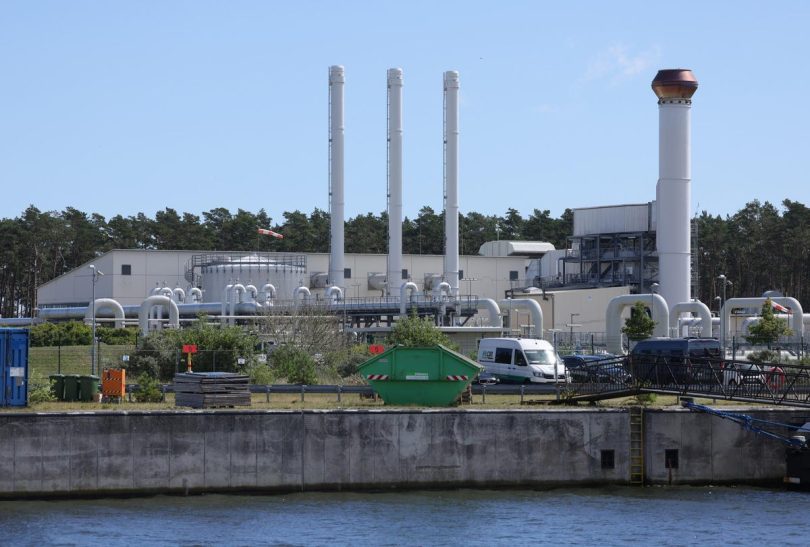 If the West stops buying oil this really hurts Russia – more than if the West stopped buying gas. Back in May, the EU agreed to ban all Russian oil imports by the end of 2022, at least those that are delivered by sea. That was a good move.

Russia threatens to cut gas supplies to the European Union.

Russia has realized that cutting natural gas doesn’t affect their export revenue (like oil does) but it affects the economies of EU countries a lot more. Russia supplied the EU with 40% of its gas last year, with Germany, Italy, and Netherlands the top three importers in actual volumes of gas.

Germany had imported more than 50% of its gas from Russia via the Nord Stream 1 pipeline. By the end of June, this had fallen to 25%.

So for Russia, cutting gas is a powerful economic weapon.

The hurt to EU is even greater because the price of natural gas in Europe and Asia rose in October 2021 to 5 times its value of a year before, and has stayed there. It’s now a lot more expensive to replace Russian gas.

This week, Russia did more than threaten to cut gas supplies. They cut back its main supply of gas to Europe, via the Nord Stream 1 pipeline beneath the Baltic Sea, which is now flowing at about 20% of its full capacity.

Gas prices in the EU have jumped to 205 Euros/MWhour which is close to the peak price on March 8. This is 5.5 times higher than one year ago when it was 37 Euros/MWhour.

The UK is less affected by volumes of gas as they import less than 5% from Russia. But their costs for gas have soared too – they are now seeing the same surge in price as the EU.

Russia blamed the cutback on a faulty pumping turbine, but Germany dismissed this.

After days of tense talks, EU members agreed on a voluntary reduction of 15% of natural gas usage between now and March 2023. The goal is to save gas now so gas storage can hopefully meet the commercial and domestic needs of gas during the European winter.

But the agreement is full of exemptions, like holes in swiss cheese as one observer said. Many compromises were made, as befits the way the EU strives to maintain unity.

The European Commission President, Ursula von der Leyen, didn’t make any bones about it…she said it’s likely that Russia would cut off all gas supplies to the EU.

In the second quarter of 2022, Big-Oil will reveal $50 billion profit, a record according to Bloomberg.

“Exxon Mobil Corp., Chevron Corp., Shell Plc, TotalEnergies SE and BP Plc — collectively known as the supermajors — are set to make even more money than they did in 2008, when international oil prices jumped as high as $147 a barrel. That’s because it’s not just crude that has soared during the crisis created by Russia’s invasion of Ukraine, natural gas prices and refining margins have also broken records. Exxon leads the pack with a 46% rise this year, while TotalEnergies is the worst performer, though still up 11% while the S&P 500 Index has dropped 17%.”

Refining capacity of oil around the world has fallen due to the pandemic, sanctions aimed at Russia, and lower petroleum exports from China. As a result, in a gallon of US gasoline 26% of the cost is now due to refining while this was only 14% in the previous ten years.

Since 2014, oil and gas companies have shifted to a more conservative position so they could attain higher profits for investors. Most companies strongly reduced their capital expenditures (CAPEX): this year the spend is only half what it was in 2013, according to Bloomberg. Some companies, such as Exxon Mobil and Chevron, plan to buy back stock or otherwise pay down their debt. Memories of the pandemic price dropout, as well as a potential imminent world recession, are real fears.

What can the EU do to offset the Russian gas cuts?

Politically, Germany turned their back on coal and nuclear in the period 2005-2015. This left them with solar and windfarm renewables and of course natural gas – which came from Russia who had plenty of it.

This cozy relationship between Germany and Russia continued until the eventual building of a second Baltic pipeline, Nord Stream 2, that was completed in September 2021. But the gas never came because of the buildup of Russian forces around Ukraine.

According to Martin Rylance, advisor at THREE60 Energy, oil and gas companies in Europe are doing as much as they can to provide energy solutions for Europe. But the timelines can be lengthy.

LNG imports could meet 40% of Europe’s needs, according to Bloomberg, by 2026. While this is twice as much as in 2021, it falls far short of the total gas imports from Russia.

Rylance said the US, Australia, and Qatar may be able to boost their deliveries of LNG to EU, and other countries such as Algeria, Nigeria, could come into play to fill the gap. There will likely be a short-term deficit but infrastructure and logistics catch-up are likely to be manageable.

Renewables in the form of windfarms and solar systems can be accelerated, but the time delays are typically in years.

A number of EU countries, such as Germany and Belgium, are assessing whether to restart mothballed nuclear power plants to help fill the gas gap.

This leaves conservation of energy, and gains can always be made there, although less gains than in the US which has a higher “wasteful index”, at least on the domestic scene. But gas use for home heating and cooking can be restrained, as well as electricity for lights that comes from gas-fired power plants.

In industrial plants the EU also said they would encourage reduced gas usage, or alternate fuel.

The ever-present fear is a looming economic recession brought on by energy shortages: particularly countries that import a lot of Russian gas – Germany, Italy, and Netherlands.

What can the US do?

The short answer is to produce more oil and gas. First, this will lower prices at the gas pump and help reduce inflation in the US and elsewhere, since both oil and gas are sold on global markets.

Then too the US can export more oil and gas (in the form of LNG) to Europe. One argument for doing this is if Russia’s oil and gas is not replaced, the price of oil and gas could double in the coming winter, and citizens would have to “choose between heating and eating.”

The recovery of US oil and gas production since the pandemic dropout of 2020 has been positive. The numbers for crude oil are as follows:

“But restoring U.S. crude and condensate production to pre-pandemic levels is well underway and will continue, particularly if supply chain constraints ease during the second half and policy supports the additional infrastructure that will be needed. Approximately 800,000 barrels of oil per day are expected to return this year, and a further increase of 900,000 barrels per day is expected next year.”

The argument continues – the more crude oil sold globally by the US the lower will be the price of gasoline, since it is now priced in global markets too.

Gas production in the US is up too, with April’s marketed figure of 104 Bcfd (billion cubic feet per day), essentially the same as it was before the pandemic dropout.

President Biden has asked the oil and gas industry to accelerate domestic production, but to no avail. Oil company bosses are wary of (1) how long the high prices will last, (2) inconsistent or unstable regulations that govern the oil and gas industry, and (3) new fossil fuel projects that could become stranded if investments are shifted to renewable energies as cars and trucks switch to EVs that don’t run on gasoline.

In respect to regulations in (2), just yesterday, July 27, democrats in the US senate have agreed on a “reform bill to ease permits for domestic energy production and transmission.” This would follow passage of an agreed $433 billion bill dubbed the Inflation Reduction Act of 2022 that includes inflation and climate and taxes that is essentially a much smaller version of the Build Back Better bill that was previously vetoed by senator Manchin many months ago. This Act would invest $369 billion for a suite of energy and climate programs.

There exist other tensions between US government and the oil and gas industry. Martin Rylance points out one:

“Biden [was] prepared to fly all the way to Saudi and beg a dictator to open the taps, or rewrite sanctions with Venezuela, rather than picking up the phone and sanctioning a pipeline with a stable neighbour [Canada] that could provide all of the crude mix that the US refineries require.”

The enormous profits by oil and gas companies lie in stark contrast with EU countries that have been depending on Russia for their oil and gas and now face shortages of gas and huge price increases.

Prophetically, President Trump a couple years ago warned that Germany and the EU were vulnerable in case Russia decided to play nasty.

First, it’s important to note that the excess oil and gas profits of the second quarter 2022 when averaged with the losses of previous years, especially 2020 when the pandemic hit, are not abnormal.

Second, the US, who pursued shale oil and gas that led the country to become self-sufficient in oil and gas are now in a position to help the EU. A month ago, President Biden promised to accelerate LNG cargoes to Europe, and big-oil companies in concert with export terminals in the Gulf of Mexico will find a way to do this.

Tensions have always existed and still remain over the priorities of fossil energy security versus climate change. Many EU countries, and even oil majors, have given more priority to renewable energies in the past 20 years. One lesson of 2022 is when transitioning toward renewables to be careful to preserve energy security.

A recent proposal, by Thomas L. Friedman, seems an appropriate finale to this report. He urges President Biden to sit down with the largest oil and gas companies, as well as top environmental and energy experts, and lock the doors until they come up with a strategy for a green transition. The goals of this confab could be:

“In the short term, we need more oil and gas produced in the cleanest ways, with the least methane leakage, to bring down prices at the pump and help dampen inflation. Also in the short term, we need to produce more oil and gas to export to our NATO allies in Europe that have vowed to get off Russian oil — because if the Europeans do so without an abundant alternative, the global price of oil could go to $200 a barrel next winter and force their citizens to choose between heating and eating.

Most important, for the short term and the long term, we need to produce as much renewable energy and efficiency as possible to help mitigate climate change, which is helping to ignite dangerously high temperatures around the world this month, among many other weird and scary weather phenomena.”

The brand new $433 billion Inflation Reduction Act of 2022 for a suite of energy and climate programs, announced today, plus the subsequent “reform bill to ease permits for domestic energy production and transmission” appear to be a good start in this direction.