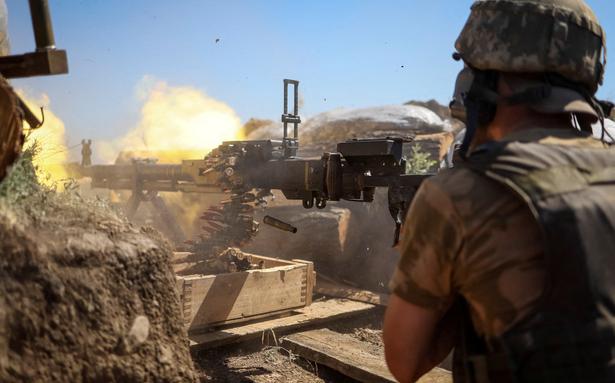 Ukrainian and British officials warned on June 11 that Russian forces are relying on weapons able to cause mass casualties as they try to make headway in capturing eastern Ukraine and fierce, prolonged fighting depletes resources on both sides.

Meanwhile, Ukraine pleaded to Western countries for faster deliveries of weapons as better-armed Russian forces pounded the east of the country, and for humanitarian support to combat growing outbreaks of deadly diseases.

During a visit to Kyiv by the European Union’s top official, Ukrainian President Volodymyr Zelensky called for a new round of “even stronger” EU sanctions against Russia. Mr. Zelensky called for them to target more Russian officials, including judges, and to hamper the activities of all Russian banks, including that of gas giant Gazprom, as well as all Russian companies helping Moscow “in any way.”

Russian forces said Sunday they had struck a site in western Ukraine storing large amounts of weapons supplied by the United States and European countries, as the battle intensified for the key eastern city of Severodonetsk.

The strike on the town of Chortkiv, a rare attack by Russia in the relatively calm west of Ukraine, left 22 people injured, the regional governor said.

Meanwhile the situation in Severodonetsk was “extremely difficult”, after the Russian army destroyed a second bridge into the city and was heavily bombarding the last one, regional governor Sergiy Gaiday said.— AFP

An employee takes part in preparations before the opening of the new restaurant “Vkusno & tochka” following McDonald’s Corp company’s exit from the Russian market in Moscow, Russia on June 12, 2022.
| Photo Credit: Reuters

Former McDonald’s restaurants in Russia have been renamed “Vkusno i tochka” (“Delicious. Full Stop”), the new owner said ahead of their grand re-opening later on June 12.

“The new name is Vkusno i tochka,” Oleg Paroyev, the director general of the new group, told a press conference in Moscow.

Replete with a new logo to replace the Golden Arches, the restaurant on Moscow’s Pushkin Square — where the very first McDonald’s opened its doors to long queues and great fanfare in January 1990 — was due to open its doors again at noon. – AFP

A rocket attack on the Western Ukrainian city of Chortkiv has partly destroyed a military facility and injured 22 people, the governor of the Ternopil region said in an online briefing on Sunday.

“All missiles were from the Black Sea. A military facility and civilian facilities were partially destroyed. There are no casualties but we have injured — 22 people were hospitalised,” Mr. Trush said, adding the injured included a 12-year-old child.

Four apartment buildings had been damaged, he said. – Reuters

Ukraine remains in control of the Azot chemical plant in Sievierodonetsk where hundreds of civilians are sheltering, the region’s governor said on Sunday.

“Azot is not blocked, fighting is going on in the streets next to the plant,” Serhiy Gaidai said on Ukraine‘s television.

He added that he expects Russian forces to use all their efforts to try to capture the city either on Sunday or on Monday. – Reuters

Sanctioned by Ukraine in the past over his close ties to Russia, Dmytro Firtash, one of the country’s wealthiest citizens, made international headlines this week for saying he is sheltering hundreds of Ukrainians in his chemical factory.

“This war is completely pointless and cannot be justified in any way, it only brings suffering and misery on all sides. This humanitarian tragedy is intolerable,” the 57-year-old said in a statement on his company’s website.

A one-time ally of ousted pro-Russian Ukrainian president Viktor Yanukovych, Mr. Firtash, who is currently in Austria and fighting extradition to the U.S. on bribery accusations, has a controversial history. – AFP

The Russia-Ukraine war has adversely affected the livelihood of lakhs of workers of the diamond industry in Gujarat, especially in rural parts of Saurashtra region where many units import small-size diamonds from Russia for processing and polishing, according to industry representatives.

The State’s diamond industry employs nearly 15 lakh workers, the Gems and Jewellery Export Promotion Council’s regional chairman, Dinesh Navadiya, told PTI. Due to the shortage of supply of small-size rough diamonds from Russia, businessmen in Gujarat are forced to buy the raw material from African countries and other places, affecting their profits.

Battle for the Donbas It’s the last major city in the eastern Luhansk Oblast where the Ukrainian forces still have some presence. The Russians have already taken over more than half of the city, including its residential areas, while fighting has been raging in its industrial western half for weeks. The Ukrainian leadership has said they are losing up to 200 soldiers every day. But despite the setbacks, the Ukrainians continue to defend Severodonetsk, the loss of which, according to President Volodymyr Zelensky, would determine the fate of Ukraine’s east.

Sri Lanka PM says he is open to Russian oil

Sri Lanka may be compelled to buy more oil from Russia as the island nation hunts desperately for fuel amid an unprecedented economic crisis, the newly appointed prime minister said.

Prime Minister Ranil Wickremesinghe said he would first look to other sources but would be open to buying more crude from Moscow. Western nations largely have cut off energy imports from Russia in line with sanctions over its war on Ukraine. – AP

In Kyiv, EU chief promises a signal on Ukraine’s bid next week

The European Commission will provide a clear signal next week on Ukraine‘s EU candidate status bid, its chief Ursula von der Leyen has said, as fighting rages in the east and south of the country.

Making a surprise visit to Kyiv on Saturday, Ms. von der Leyen said talks she held with Ukrainian President Volodymyr Zelensky “will enable us to finalise our assessment by the end of next week” — the first time the bloc has publicly given a sense of timing.

Mr. Zelensky has pressed for rapid admission into the EU to reduce Ukraine‘s geopolitical vulnerability, which was brutally exposed by Russia’s February 24 invasion. But officials and leaders in the bloc caution that, even with candidacy status, EU membership could take years or even decades. – AFP

Ukrainian and British officials warned on Saturday that Russian forces are relying on weapons able to cause mass casualties as they try to make headway in capturing eastern Ukraine and fierce, prolonged fighting depletes resources on both sides.

Russian bombers have likely been launching heavy 1960s-era anti-ship missiles in Ukraine, the U.K. Defense Ministry said. The Kh-22 missiles were primarily designed to destroy aircraft carriers using a nuclear warhead. When used in ground attacks with conventional warheads, they “are highly inaccurate and therefore can cause severe collateral damage and casualties,” the ministry said.

Ukraine pleaded to Western countries for faster deliveries of weapons as better-armed Russian forces pounded the east of the country, and for humanitarian support to combat growing outbreaks of deadly diseases.

In Sievierodonetsk, the small city that has become the focus of Russia’s advance in eastern Ukraine and one of the bloodiest flashpoints in a war well into its fourth month, further heavy fighting was reported.

Ukraine remains in control of the Azot chemical plant in Sievierodonetsk where hundreds of civilians are sheltering, the region’s governor said on Saturday, after a Russia-backed separatist claimed 300-400 Ukrainian fighters were also trapped there.

“The information about the blockade of the Azot plant is a lie,” Serhiy Gaidai, governor of the Luhansk region partially controlled by pro-Russian separatists, said on the Telegram messaging app.