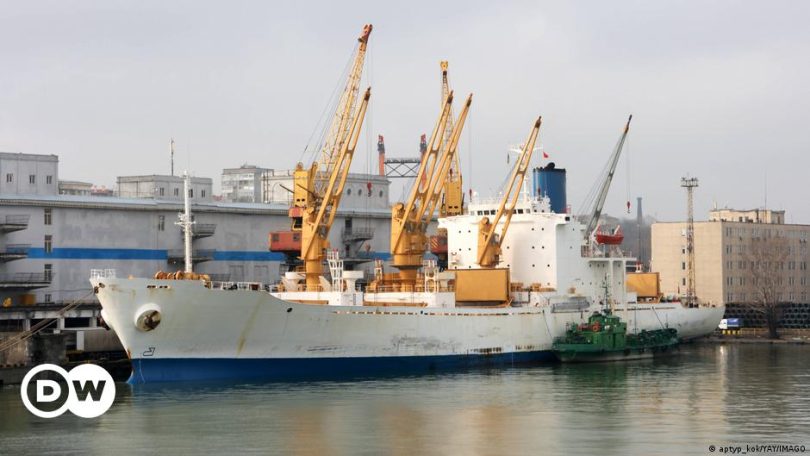 Ukrainian navy said operations have resumed in the ports of Odesa, Chernomorsk and Pivdennyi in relation to the deal to continue grain exports.

They said ships would be traveling in convoys for safety.

“Military and civilian specialists carefully search for underwater objects and install special means of navigation equipment that will help the safety of navigation,” the navy said on social media.

In a statement, the Ukrainian navy said, “The main thing was, is and will be the safety of navigation.”

In addition to the reopening of ports, a joint coordination center for Ukrainian grain exports formally opened in Istanbul as part of a UN-backed deal. Ukraine’s Black Sea ports have been closed since Russia began its invasion on February 24, helping keep already rising global food prices at unusually high levels.

Hulusi Akar, the Turkish defense minister, who was present at the center’s opening, said, “The staff working at this center are aware that the eyes of the world are upon them,” adding, “It is our hope that the center will make greatest contribution possible to humanitarian needs and peace.”

The joint coordination center staff will be comprised of civilian and military officials from both Russia and Ukraine as well as delegates from Turkey and the UN. Their primary task will be to monitor the safe passage of Ukrainian grain ships along established routes and oversee inspections to ensure ships are not carrying banned weapons as they move into and out of the Black Sea.

Here are the other main headlines from the war in Ukraine on July 27.

Ukraine to boost electricity exports to the EU

President Volodomyr Zelenskyy has announced that Ukraine will increase electricity exports to the European Union as Russia cuts gas supplies.

“We are preparing to increase our export of electricity to consumers in the European Union,” Zelenskyy said in his Wednesday evening address.

“Our exports allow us not only to earn foreign currency, but also to help our partners withstand Russian energy pressure.”

He added that he wants to “gradually make Ukraine one of the guarantors of European energy security thanks to our domestic production” as Russia winds down gas flow through the Nord Stream pipeline.

However, Russian troops recently captured Ukraine’s largest nuclear plant in Enerhodar as well as a hydroelectric plant on the Dnieper River and at least two major coal-fired power plants.

Russian forces are undertaking a “massive redeployment” in what one senior Ukrainian official says represents a shift from offense to a strategic defense.

“[This would] place us in a position where we are unable to liberate all our territory and call for talks,” he said on Wednesday.

Ukraine recently made clear that it intends to recapture the southern port city of Kherson, which is held by Russia but located further away from Moscow’s strongholds in Donetsk and Luhansk.

A key Russian-held bridge in Kherson was hit in a Ukrainian counteroffensive to recapture the southern region from Russia.

The Antonovsky bridge across the Dnieper River has been closed for civilians, Kirill Stremousov, deputy head of the Russian-appointed city administration, told Russia’s Interfax news agency.

Separately, Russia’s TASS news agency quoted the official as saying that HIMARS had targeted the bridge.

He said the bridge was still standing, but its deck was pierced with holes, stopping vehicles from crossing.

The bridge is the main crossing across the Dnieper River in the Kherson region and is essential for Russian resupply routes into the region.

The only other option is a dam at the hydroelectric plant in Kakhovka, which also came under Ukrainian fire last week but has remained open for traffic.

The European Court of Justice in Luxembourg upheld the EU ban imposed in March as part of EU sanctions slapped on Moscow over its invasion of Ukraine.

The court said in a statement that its decision was based on the sanctions being temporary and found that they were “appropriate and necessary to the aims pursued” given the “extraordinary context.”

They also concluded that evidence presented by RT France was “not capable of demonstrating an overall balanced treatment by the latter of information concerning the ongoing war.”

The Kremlin said the EU court’s decision was “extremely negative” and that Moscow would take similar measures against Western media in response.

The Kremlin’s already shut down DW’s operations in Russia in February.

Ukrainian President Volodymyr Zelenskyy has nominated Andriy Kostin, a lawmaker from his own party, to be the country’s next prosecutor general.

She and the head of the Security Service of Ukraine, Ivan Bakanov, were fired earlier this month.

Zelenskyy dismissed them over numerous cases of collaboration by members of their agencies in the Russian-occupied regions of Ukraine.

It was not immediately clear when parliament would vote on Kostin’s appointment.

Biden and Xi expected to speak about Ukraine

US President Joe Biden and China’s leader Xi Jinping are expected to talk on Thursday amid new divisions over Taiwan and Russia’s invasion of Ukraine.

“Everything from the tensions over Taiwan, to the war in Ukraine, as well as how we better manage competition between our two nations, certainly in the economic sphere,” will be on the agenda, said White House national security spokesperson John Kirby.

Earlier this month, US Secretary of State Antony Blinken pressured Beijing to end its tacit support for Russia’s invasion of Ukraine and to join the other G20 countries in formal condemnation of the war.

The Chinese Foreign Minister blamed the US for the downturn in relations and said that American policy had been derailed by what he called a misperception of China as a threat.

The UK’s Ministry of Defence says Russia’s controversial Wagner Group made tactical advances in the Donbas around the Vuhlehirska power plant and the nearby village of Novoluhanske.

In a daily intelligence briefing, the ministry said some Ukrainian forces have likely withdrawn from the area.

More on the war in Ukraine

Russia launched another rocket attack on Ukraine’s southern Black Sea region on Tuesday, Ukraine’s military said. The military said that port infrastructure was targeted in the Mykolaiv region, a claim backed up by the region’s governor Vitaliy Kim, who posted a video of the attack showing multiple explosions.

DW looks at the impact the resumption of Ukrainian grain exports via the Black Sea will have on the rest of the world.

As the fallout over the war in Ukraine continues, the Russian space agency, Roskosmos, said it will withdraw from the International Space Station and focus on building its own. In Ethiopia, Russian Foreign Minister Sergei Lavrov decried the “so-called food crisis,” blaming Western sanctions for an ongoing food crisis that has heavily impacted African nations.

Energy ministers from the EU agreed a plan to cut gas use across the bloc amid fears Russia could stop supplies. But some say the current watered-down proposal will not be enough to prepare for winter.