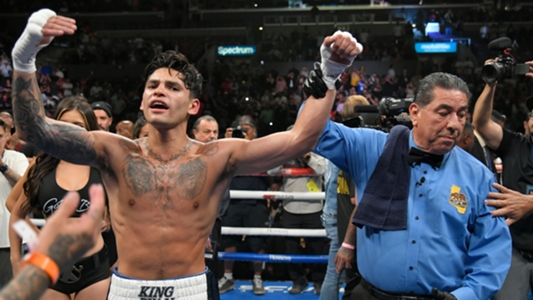 In the run-up to his knockout win over Javier Fortuna, Ryan Garcia sent shockwaves through the boxing world with some interesting comments about the legitimacy of world titles.

When speaking to The DAZN Boxing Show following the weigh-in for his fight with Fortuna, Garcia was quick to point out that the various world title belts in his eyes mean nothing.

“You guys put so much emphasis on these belts. Let them go, they don’t mean s—t. Belts don’t mean sh!t nowadays,” Garcia said.

WBA president Gilberto Mendoza was then given the chance to react to these comments on The DAZN Boxing Show, simply replying with the following: “Strong words.”

Mendoza then went onto say he believes the pressures of fight week may have been the reason why Garcia took this particular stance on world title belts.

“My belt is a 100 years old, no matter what. I understand Ryan. I understand that he’s at the top of the game, I think he’s very positive for the sport.

“But not every boxer is like him. A boxer needs belts at the end of the day, unfortunately I think he got caught up in the moment.”

While Mendoza understood some of Garcia’s reasoning, he claimed that in order for the 23-year-old rising star to create a legacy in the sport, he needs to win world titles.

“He’s young, he gets a lot of attention because he doesn’t have a belt, but at the end of the day if he wants to write his name in the history books, that legacy cannot continue to happen if he doesn’t have four belts,” Mendoza said.

“If he wants to prove himself in this current boxing atmosphere, he needs to win the four belts not only at lightweight, but at 140 and 147, which I think he has a lot of potential to do.”