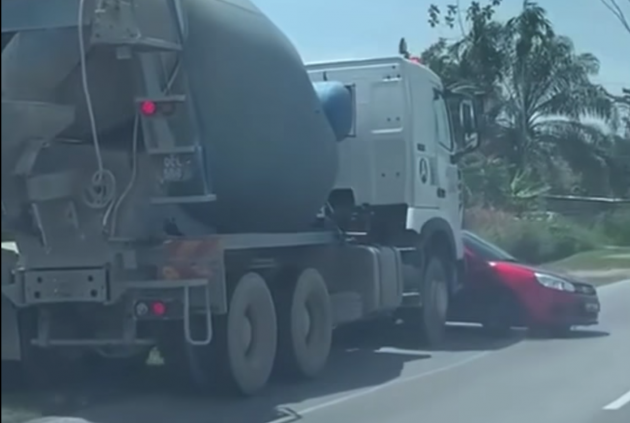 We’ve shared a few posts on this before (see Myvi vs tanker), but here’s the most graphic example of the dangers of getting too close to a lorry’s side, specifically the blind spot of large vehicles. Where’s this blind spot? Just by the side of the driver, on both sides – here, you’re not in the view of their side mirrors.

These videos, shared by Fareez Aiman on Facebook, show a Proton Saga doing exactly that by attempting to pass a cement mixer from the outside at a traffic light junction in Sarawak.

The lights are green and the lorry maintains its curve to the right as the Saga makes its move. The big vehicle most probably didn’t know what happened until the Saga ended up sideways on its nose, and other motorists started to sound their horn. The mixer drove for some distance before pulling over.

See all three videos for different perspectives of the clash – one is from behind the Saga, one is a wider view from further behind, and one is a close up of the sedan, which had zero control once it kena sodok.

Many would immediately point fingers at the lorry driver in this clash of elephant and mouse, but perhaps we just don’t understand. Yes, there have been cases of reckless driving involving lorry drivers, on top of poorly maintained trucks that endanger motorists, but here, it’s simple – if the lorry driver can’t see you, he can’t make allowances, and the blind spots for big rigs are larger than that of cars.

This is brilliantly illustrated by Pakcik Shell on Instagram. The friendly uncle, whose day job is the MD of Shell Malaysia Trading, gets into one of the company’s tankers and shows us a clear view of the truck’s surroundings. Except that it’s not actually clear. Check out the video below to see a truck driver’s view for yourself.

Keep this tidbit and incident in mind and give big trucks a wide berth to avoid avoidable contact. Let’s all be more patient on the road and get home safe. Can you imagine the trauma the Saga occupants are having?