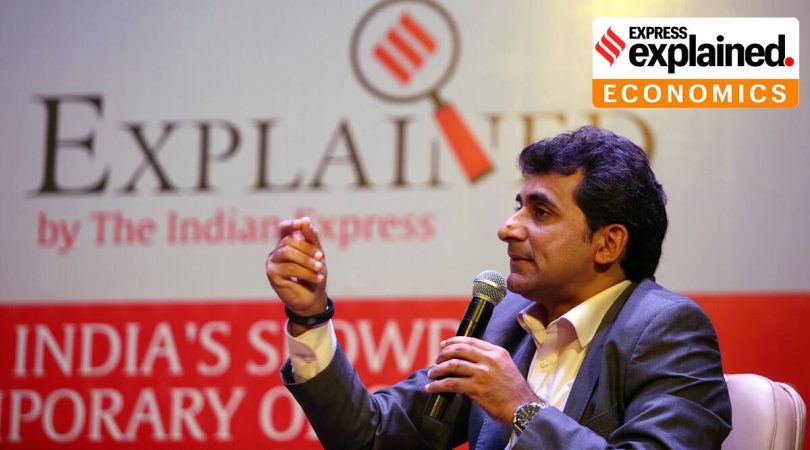 A higher imported inflation is a consequence of a sharp depreciation in the rupee’s value but the tradeoff involved in defending the currency’s value is an adverse impact on exports, labour-intensive sectors, jobs and economic growth, Sajjid Chinoy, JP Morgan’s Chief India Economist, who is also a Part-Time Member in the Prime Minister’s Economic Advisory Council (EAC-PM) said in an Explained session organised by The Indian Express on Tuesday.

Chinoy added with every one rupee depreciation of the dollar-rupee rate, inflation picks up by 8-10 basis points and even though the pass through effect of the exchange rate movement on inflation is higher than expected, it is not completely driving the inflation rate.

“…there are tradeoffs here. Let’s assume that the rupee didn’t move at all and the RBI used all its reserves and kept the rupee at 75 (against the dollar) and this 7 per cent depreciation didn’t happen, this would mean 4-5 per cent real exchange rate appreciation. We have seen over time this doesn’t happen instantaneously, that hurts exports. In the 2018 paper we wrote, we found that it affects textiles, leather, gems and jewellery, engineering goods, pharmaceuticals. There’s higher inflation but the tradeoff is that if you didn’t have that, what you would have is: exports getting hurt, growth getting hurt, this will include labour-intensive sectors and that means jobs ultimately getting hurt. So the pain has to be felt somewhere. The question is do you get diffused pain over the entire population or do you get concentrated pain where some sectors and some workers actually leave their jobs. There’s no free lunch when you are hit by global shock,” he said.

Speaking in the Explained session moderated by The Indian Express’ Executive Editor P Vaidyanathan Iyer on Tuesday, Chinoy said of the country’s 7 per cent inflation rate, almost 50-70 basis points is attributable to the weak exchange rate in addition to a significant implant from the rise in commodity prices. “I understand the argument that when the rupee weakens, you get higher inflation but magnitudes matter. The RBI’s estimates are that every one rupee depreciation of the dollar-rupee rate, inflation picks up by about 8-10 basis points. Since the start of the year, we are down about 7 per cent. That tells us that of India’s 7 per cent inflation rate, 50-70 basis points is attributable to the weaker exchange rate. These exchange rates may be bigger than we thought but are not driving half of India’s inflation movement, it is actually coming from the commodities picking up,” he said.

The rupee’s depreciation against the dollar, on account of aggressive monetary tightening by the US Fed and the spillover effects of the Russia-Ukraine conflict, has thrown major challenges for policymakers in the government and the RBI. The rupee depreciated over 7 per cent in 2022 and breached 80, before staging a partial recovery, largely due to the intervention of the central bank in the forex market.