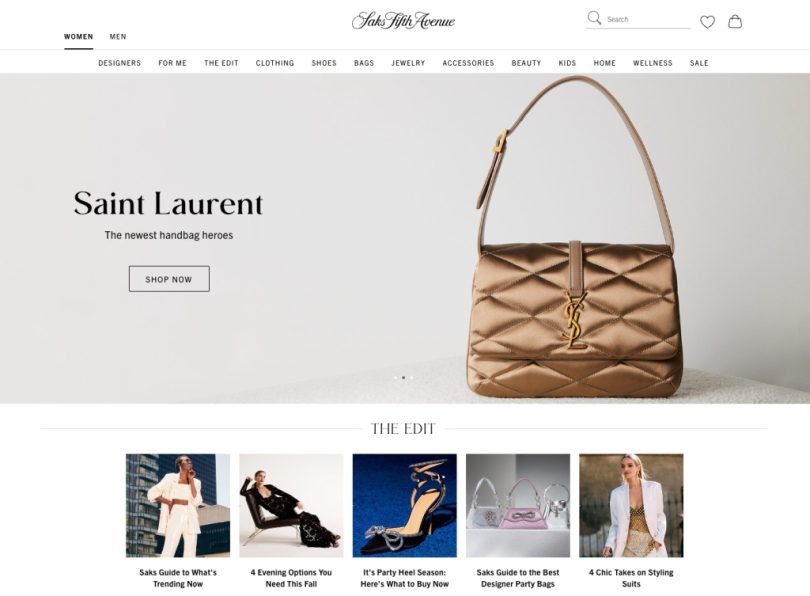 Saks.com posted double-digit gains last quarter and is tracking well above pre-pandemic levels, and from the retailer’s perspective, that’s confirmation that the strategy of separating the Saks Fifth Avenue stores and e-commerce into two separate companies is working.

“It’s liberated both channels to focus and grow as much as they possibly can. You are seeing evidence of that in the numbers,” Marc Metrick, chief executive officer of saks.com, told WWD in an exclusive interview.

As private companies, saks.com and the Saks Fifth Avenue stores don’t publicly share any top- or bottom-line dollar figures, making it difficult for outsiders to get a precise read on performances. However, on Wednesday, in his quarterly update on the businesses to vendors, Metrick wrote that e-commerce sales on a gross merchandising value (GMV) basis for the second quarter of 2022 increased 35 percent compared to “an impressive” second quarter of 2021. He said the last quarter was driven by strong traffic, customer retention and new customer growth, and that the top performing categories were men’s and women’s designer ready-to-wear, handbags and jewelry.

At saks.com, “We are just going after the customer in a different way — improving the online experience, the packaging, the shipping speed and the tactics we are deploying to grow our customer accounts,” Metrick said in the interview.

“If you look at Saks Fifth Avenue in 2022 versus 2019, the Saks stores are up almost 25 percent. The volume that the stores are doing on a per square foot basis is higher than they were pre-pandemic, pre-separation. Nothing is wrong there.”

He said the Fifth Avenue flagship is “doing a lot better.…Stores are growing across the country but our more outsized growth is coming from Texas, Florida and Atlanta, which is its own market. The stores, versus our pre-separation volumes, continue to experience a pretty nice increase in productivity,” Metrick said, though he declined to specify the sales per square foot.

Some capital improvements at the stores are underway. The renovation of the men’s advanced designer area on the seventh floor of the Fifth Avenue flagship is expected to be completed this fall, and construction on the new Beverly Hills flagship is underway and the store is on track to open in fall 2023.

Saks Fifth Avenue’s reengineering into two companies has drawn criticism from certain retail experts, who see the split as overly complicated, involving a great deal of administrative detail, and undermining efforts to create more seamless experiences for omnichannel shoppers. Some also view it as a sign that Hudson’s Bay Co., owner of Saks Fifth Avenue, Hudson’s Bay and Saks Off 5th, sees a big future in dot-com while having diminished expectations for the stores. Hudson’s Bay and Off 5th have also split their dot-com and store operations into separate companies.

However, Metrick and other HBC executives have argued that HBC’s new business model for its brands doesn’t impair the customer experience and that scores of service agreements ensure smooth cooperation and integrations between the dot-com and store operations. They also say the strategy shines a brighter light on the value of Saks’ e-commerce business. As reported, Insight Partners made a $500 million minority equity investment in the Saks e-commerce site, valuing it at $2 billion. Sources have told WWD that saks.com is generating about $2 billion in gross merchandise volume, though the company officials declined to confirm that figure. Officials did say that saks.com ships to more than 100 countries.

There’s speculation that saks.com is being positioned for a possible initial public offering, though considering the roller-coaster ride that the stock market has been on for awhile, that isn’t likely to happen anytime soon. The 40-store Saks Fifth Avenue fleet, known as SFA, remains wholly owned by HBC.

“I look at how many customers are shopping both channels,” Metrick said in the interview. In the past, “That was a thorn in the side. A lot of store customers only shopped the stores. A lot of our online customers only shopped online. But what we saw last quarter was a 26 percent increase in the amount of consumers shopping both channels. With these customers, there was a 19 percent increase in orders per customer and a 9 percent increase in average order value. That’s all proof of concept of the strategy. It’s not just an online story. It’s not just an offline story. It’s a consumer story with the Saks Fifth Avenue brand.”

According to the company, Saks added 450 brands to its website in 2021, and another 400 brands were added to the website so far this year. Merchandise on saks.com is still almost entirely procured through traditional wholesaling, though the company is evolving into a marketplace. “Even in full maturation, a majority of our volume will still be generated through the wholesale business,” Metrick said.

“When you think about the amount of brands we have, it’s all luxury. It’s very important for people to understand that. When people hear and see scale and growth they immediately think about broadening and taking unnecessary chances with the brand. I don’t want people to think we are abdicating our position, or moving down” from luxury.

“Everything we’ve added is for people who aspire to buy luxury product. That’s how I think about the Saks Fifth Avenue business. I don’t think of our business as a luxury consumer business. We are actually a luxury business for anybody who wants to aspire, anyone who wants to reach in, whether it’s activewear, home, maternity, children’s, or eventually art, or wellness in a much more pronounced way. We want to be there for the consumer who wants luxury. We’ve added lots of product, lots of choice, lots of selection. We are always changing. The consumer base is changing. What they want to experience and what they want to shop for is changing.”

He said saks.com’s customer retention rate is increasing, existing customers are buying more and the brand is taking in new customers as well. In 2021, when online shopping was still soaring due to the pandemic, saks.com saw 1 million new customers, according to the company.

“It’s because of the assortment, because of our [customer] acquisition and how we are marketing,” Metrick said. “We’ve gone after a lot of different media channels. Saks used to punch very low in the funnel. If you were searching for a Moncler coat, then we would market you that Moncler coat. Now we are on TikTok. We will be on YouTube, Apple TV, Spotify. We are doing a lot more prospecting, more acquisition marketing.”

He’s also citing data-driven initiatives, personalization tactics, improved communications between customers and Saks stylists, improved visibility into “the full customer journey,” both online and in store, among other initiatives to drive repeat purchases and shopping across channels and categories.

Saks also seems to be spending more to produce what Metrick characterized in his letter as “engaging experiences and unique physical representations” of saks.com.

“In July, we hosted our first immersive shopping experience in Aspen,” he wrote. “The pop-up was complemented by a VIP weekend during which we hosted influencers, tastemakers and top clients for special experiences and events — including our launch party at local hotspot Casa Tua that I cohosted with actress Zoey Deutch — and a Saks Live event hosted by Marianna Hewitt, which gave viewers virtual access.”

He also cited the series of dinners Saks hosted in the Hamptons this summer, where same-day delivery from the New York flagship was offered.

Next year, Saks will expand its digital “Limitless VIP program” for the highest spending clientele, Metrick noted. It provides access to special merchandise, experiences and personal styling, and even has invited Limitless clients to events in Paris, Rome, Sicily, Italy, and Seville, Spain, for access to never-before-seen collections and cultural experiences.

“It’s been a wholesale change since we separated the businesses,” Metrick told WWD. “You can’t just go after this very refined number of people that live in this little luxury world. You have to go after people who want luxury product.”

By most accounts, the luxury market has been holding up this year, despite inflation, economic uncertainties and the stock market’s volatility. How long luxury continues to hold up remains to be seen, in light of some consumer spending shifting toward experiences, such as dining out, theater and traveling.

“I think we are coming off one of the most irrational times for luxury consumption that I’ve seen,” Metrick said. “That’s unfortunately the base case. What we are seeing now is a trajectory that is slowing versus where it was, but it’s still growing. I would say much more so on the core side of the luxury consumer where the aspirational consumer is still growing but just not at the same rate we were experiencing in the last 12 months. There is still a tremendous amount of demand out there for luxury goods evidenced by our 35 percent gain.

“With travel and people going out, we benefit from that,” Metrick said. “For a year and a half during the pandemic, the question was ‘Where are people going to wear all this stuff?’ We are a go out and travel business. The more vacations people are taking, the more theater they are seeing, the more dinners they go out for, the more charity events, or fashion week kickoff parties they attend, the more they are going to get dressed. We win with that.”

Eighteen months ago, when saks.com and the Saks Fifth Avenue stores were separated into two companies, Metrick and his team developed a five-year plan. “That plan was going to require us to fund the business, to invest in our website, to invest in category expansion, in the assortment, to invest in the right marketing tactics, to invest in the team. That’s not changing,” Metrick said.

Last month, Saks revealed it had bolstered its existing asset-based revolving credit facility arranged by Bank of America NA from $350 million to $450 million. Saks also said it closed on a $60 million “upsize” facility with Pathlight Capital LP, thereby building on an existing senior secured term loan facility. The closing, which happened on Aug. 11, resulted in a $175 million total credit facility, in which Pathlight served as administrative agent.

“We didn’t really add more debt. We added some to the term loan, but we just expanded the revolver a bit, which is asset-backed, with our existing lenders,” Metrick said. “We just wanted to make sure that we positioned ourselves to still fund our growth plans, to still fund our strategy, as we go through what I’m considering to be potentially turbulent times in the markets.”

Asked how Saks is approaching the upcoming holiday season, Metrick replied, “It’s about 90 days from now. That’s like three years, in the way the winds are blowing. But I will tell you this: We don’t think there will be the supply chain pressure there was last year. Christmas isn’t going to come as early as it came last year when consumers were genuinely worried about shipping and supply. I think Christmas is going to come when it normally comes. We are watching the markets. We are watching what’s happening. I’m feeling good about it.”

Among the categories Saks is banking on for holiday, Metrick didn’t give away too much, just citing jewelry, cashmere, lots of luxe and plush, polished merchandise.

“One thing I have learned from all of my years at Saks — through the pandemic, 9/11, the Great Recession — is that you win by steadfastly staying committed to your strategy. Be consistent in being there for the customer.”