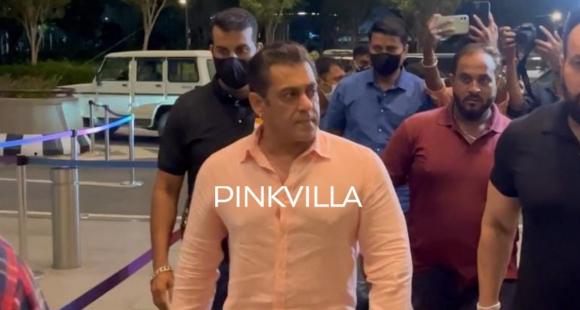 Salman Khan is one of the biggest stars to have graced the Bollywood industry. The superstar has a career spanning more than three decades and enjoys a dedicated cult fan following. He continues to charm audiences with his swag and has an aura of his own. While he is such a big star, he values his fans and makes it a point to greet them on his birthdays and on Eid apart from other fan interactions that he is a part of. He also tries to support Indian artists by promoting work of actors and artists from different entertainment industries like, he recently took the initiative to present Kichcha Sudeep and Jacqueline Fernandez’s film Vikrant Rona in Hindi.

Salman Khan got papped at the Mumbai airport earlier this evening. The ‘Bhaijaan of Bollywood’ wore a peach coloured shirt and black trousers. He looked all ripped and confidently walked from his car to the airport terminal, along with his bodyguard. He sported a clean-shaven look and also had on earrings on both his ears. The security was at its A-game for the superstar. Interestingly, the actor got his arms license today, too.

Have a look at Salman Khan being papped at the Mumbai airport: Salman Khan was last seen in Mahesh Manjrekar’s Antim alongside Aayush Sharma and will next be seen in Bhaijaan with Farhad Samji which is expected to release in the last week of 2022. The movie has an ensemble cast with big names from the Telugu and Hindi film industry. After his film with Farhad Samji, he will be seen in Yash Raj Films’ Tiger 3, directed by Maneesh Sharma, alongside Katrina Kaif and Emraan Hashmi which sees an Eid 2023 release. Apart from these films, work on No Entry Mein Entry with Anees Bazmee and Dabangg 4 with Tigmanshu Dhulia is on. While script for No Entry Mein Entry has been cracked, work on Dabangg 4 is still on. The actor even confirmed his presence in Bajrangi Bhaijaan’s sequel Pawanputra Bhaijaan, which is being written by the writer of Bajrangi Bhaijaan himself, V Vijendra Prasad.