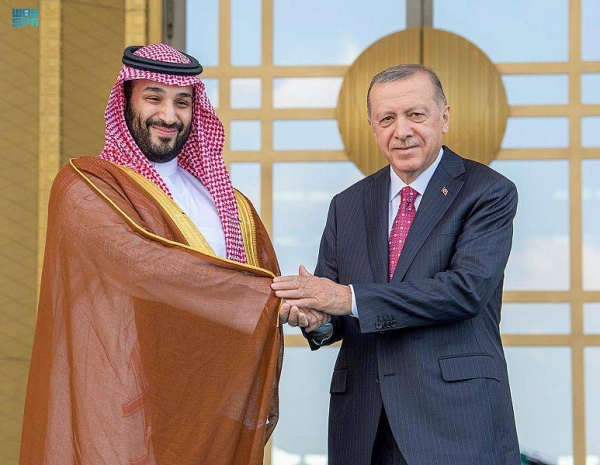 ANKARA – Crown Prince Mohammed Bin Salman, deputy premier and minister of defense, reiterated the keenness of Saudi Arabia and Turkey on moving forward to further consolidate and develop bilateral relations between the two countries and their peoples in various fields.

The Crown Prince said this in a cable of thanks to President Recep Tayyip Erdogan of Turkey, upon his departure from Ankara after an official visit to the country on Wednesday evening, the Saudi Press Agency reported.

Erdogan arrived at the Ankara International Airport to see off the Crown Prince.

“As I leave your sisterly country, it gives me great pleasure to express to Your Excellency my deepest gratitude and appreciation for the warm reception and hospitality that was accorded to me and the accompanying delegation.

“This visit made it possible to discuss topics of common interest, which confirms the keenness of our two countries to move forward in consolidating and developing bilateral relations between them in various fields under the leadership of Custodian of the Two Holy Mosques King Salman and Your Excellency,” he said.

He noted that this aims to achieve the interests of the two countries and the peoples, as well as to strengthen security and stability in the region.

The Crown Prince wished Erdogan good health and happiness, as well as further progress and prosperity to Turkey and its people.