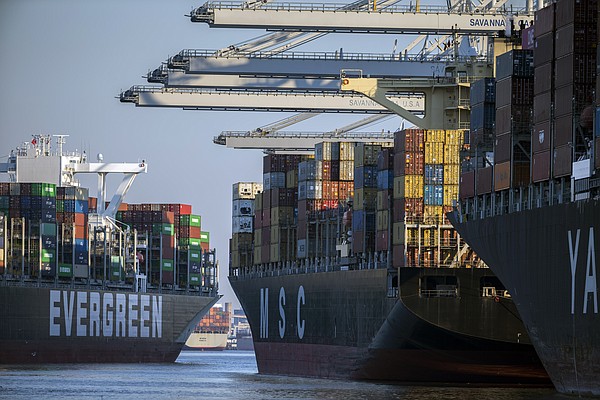 SAVANNAH, Ga. — The Port of Savannah saw record-breaking cargo volumes this past fiscal year amid a surge in imports and West Coast backlogs that prompted shippers to reroute goods to the East Coast.

It has also kept the fourth-busiest U.S. container port scrambling to catch up. In the past year, the Port of Savannah has hired additional workers, added equipment and increased its container yard capacity by about 25%. And the completion in March of a seven-year, $973 million deepening of Savannah’s shipping channel means ships can carry more cargo without waiting for higher tides.

Still, roughly 40 ships were sitting at anchor offshore last week waiting to transit the Savannah River and unload at the port’s overflowing docks.

Like other U.S. ports, Savannah has been struggling with a flood of imports shipped in containers, giant metal boxes used to transport retail goods from consumer electronics to frozen chickens. Following a slump after the coronavirus pandemic struck in 2020, trade has rebounded and kept booming amid soaring demand.

Lynch said in the past year that has meant increased traffic from Savannah’s existing customers, plus new business from shippers diverting cargo away from the West Coast where ports in Los Angeles and Long Beach, Calif., have been swamped with waiting ships.

The volume of imports coming into Savannah has more than doubled compared to before the pandemic, Lynch said. The port saw its busiest month on record in May, when nearly 520,000 containers units moved across its docks. Last month, Lynch said, Savannah worked in nine unplanned ships carrying roughly 25,000 container units of additional cargo.

“We do anticipate the volume tapering off toward the end of this year or slightly earlier,” Lynch said. “I believe that we have peaked and we’re on the downhill side of this.”

Despite the added cargo volume, the Port of Savannah has managed to keep containers from piling up on its terminal. Late last year, the port authority accelerated a $150 million expansion that increased space for storing cargo containers by 25%.

The port authority has also been using four inland sites in different areas of Georgia to temporarily store cargo and free up space at Savannah’s container terminal. Lynch said those “pop-up” container yards are expected to keep operating into 2023.

While inflation has meant higher costs for construction projects at the port, so far it does not appear to have affected cargo volumes, said Joel Wooten, the port authority’s board chairman.