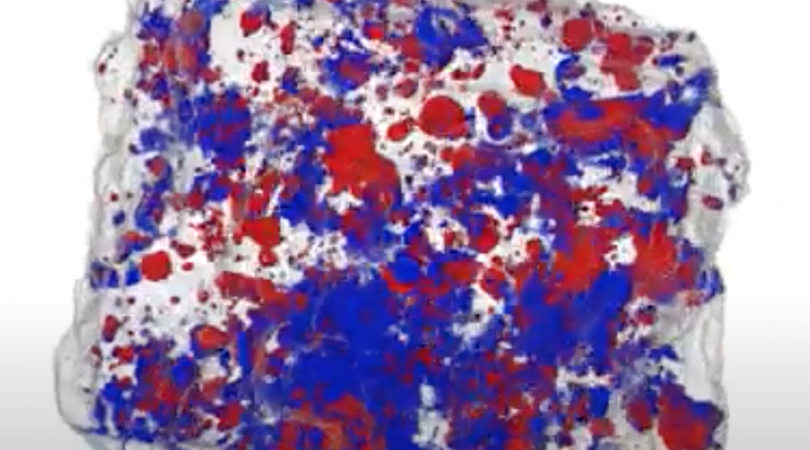 According to the scientists, neutron imaging is ideal for searching for water and other hydrogen-bearing compounds because neutrons readily ricochet off hydrogen. In contrast, X-ray imaging is best for finding deposits of heavy elements, such as iron and nickel, because X-rays are primarily scattered by the large number of electrons in heavy-weight atoms.

Neither imaging technique significantly harms or alters meteorites, unlike other methods of analyzing the chemical composition of the rocks, which require cutting thin slices of the meteorites. Although each imaging method has been used separately in the past, the team is among the first to use the two techniques simultaneously to create X-ray and neutron-beam snapshots.

In the pilot study, the group examined two meteorites whose mineral and water contents were already well known so that they could assess the accuracy of the combined imaging methods. One of the rocks, dubbed EET 87503, is a fragment from the surface of the large asteroid Vesta but also contains material from a different, water-rich variety of asteroid.

The other meteorite, GRA 06100, rich in iron and nickel, is classified as a chondrite—a rock that has not been altered by melting or other processes since the early days of the solar system. It also has a significant amount of hydrogen-bearing silicates formed by past exposure to water.

To create three-dimensional views of the meteorites, the researchers used the X-ray and neutron beams to image cross-sections of the rocks. Individual images of different cross sections were then combined to create a 3D image, a technique known as tomography or CT scan.

The imaging methods accurately revealed the locations of metal-rich minerals, silicate minerals, water and other hydrogenated compounds in the two meteorites. Neutron imaging pinpointed and characterized the chondrite grains within GRA 06100, which could then be extracted for further study. The 3D imaging can test theories of how water entered the rock and what pathway the liquid took to alter the composition of minerals and become bound in the sample.

Although water accounts for 70% of earth’s surface, exactly how the substance arrived on our planet remains the subject of a longstanding debate. Some planetary scientists suggest that meteorites and comets—icy relics from the frigid, outer solar system—delivered the water, along with the building blocks of proteins essential for life, after our planet’s core had formed. Others suggest that earth acquired the water during its formation 4.5 billion years ago from bits of gas and dust that swaddled the infant sun and glommed together to form our planet.

Water comes in two forms: ordinary water, consisting of hydrogen and oxygen, and heavy water, consisting of deuterium (hydrogen with an added neutron) and oxygen. One way to determine if meteorites were a primary source of terrestrial water is to compare the relative abundance of these two types in the rocks to the relative abundance of the water on and beneath the earth’s surface. Planetary scientists have measured the abundance in some meteorites but need to examine a larger number.

The neutron and X-ray images can assist in these studies. By pinpointing the location of mineral, metal and water deposits locked inside meteorites, the images could guide researchers on how to best slice sections of the rocks so they can measure these abundances as well as the composition of other compounds.

Following this initial trial, the team now plans to use its dual imaging technique to study less familiar meteorites so that their water and mineral content can be mapped in detail for the first time.