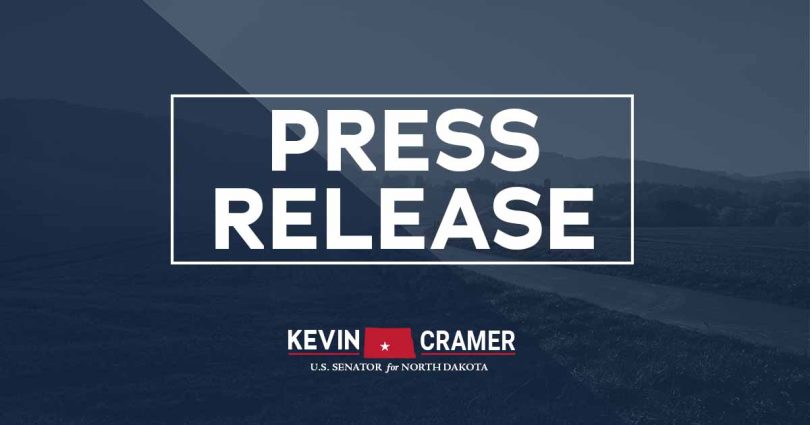 WASHINGTON – U.S. Senator Kevin Cramer (R-ND), ranking member of the Transportation and Infrastructure Subcommittee, led 16 colleagues urging Department of the Interior (DOI) Secretary Deb Haaland to implement provisions of the bipartisan infrastructure law which streamlined permitting for oil and natural gas infrastructure. In the letter, the senators highlight a section of the bipartisan Infrastructure Investment and Jobs Act (IIJA) which gave the Biden Administration authority to categorically exclude certain energy-related infrastructure projects from the National Environmental Policy Act (NEPA) on public and applicable Indian lands to prevent wasteful venting or flaring of natural gas. As Democrats and the Biden Administration push for punitive taxes and regulations on methane from oil and gas production, this section of IIJA is an available tool, currently unused by DOI, to reduce methane and carbon dioxide emissions on federal lands.

“A further reduction in methane and carbon dioxide emissions requires the federal government to serve as a facilitating partner in the development of midstream infrastructure, with federal land managers playing a pivotal role. As the North Dakota experience demonstrates, enabling private sector innovation, rather than imposing top-down federal requirements, is an effective way to reduce methane and carbon dioxide emissions,” wrote the senators.

“It has been more than seven months since the IIJA was passed and we are not aware of any substantive action taken by DOI to implement section 11318 on the lands you manage,” continued the senators.

“To date, we have not seen any substantive evidence of federal land managers utilizing the permitting efficiencies at your disposal. Rather than pursuing a punitive approach, federal land managers should use NEPA authorities like this to work with producers in a collaborative manner. We respectfully request an update on DOI’s implementation of the categorical exclusion under NEPA for issuance of a sundry notice or right-of-way for oil, natural gas, and produced water gathering lines and associated field compression or pumping units to reduce methane and carbon dioxide emissions on federal and applicable tribal lands,” concluded the senators.

In April 2022, the Government Accountability Office published a report highlighting necessary actions to reduce methane emissions from oil and natural gas development, including on federal and tribal lands. The report cited the need for infrastructure such as gathering lines and related compression units to increase natural gas capture rates and reduce methane leakage.

The same month, in a Senate Environment and Public Works Committee hearing with Environmental Protection Agency (EPA) Administrator Michael Regan, Senator Cramer highlighted poor methane capture rates on federal and tribal lands in North Dakota compared to state and private lands. North Dakota has a statewide capture rate of 95%. Capture rates vary across the state with poor performing areas, largely on federal or tribal land, clocking in as low as 74%.

In the exchange, Senator Cramer also pointed out the categorical exclusion under NEPA in the IIJA to streamline the regulatory process for the build-out of oil and natural gas infrastructure. He called for increased cooperation between federal agencies so “we can do the right thing… with a product that’s more valuable being used than vented and flared.” He encouraged EPA Administrator Regan to work with Interior Secretary Haaland to use the permitting efficiencies the agencies already have from IIJA to increase energy infrastructure which reduces methane emissions.