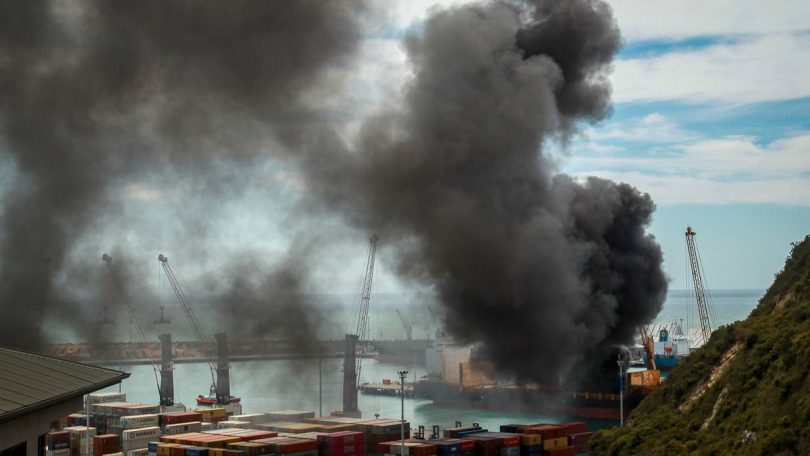 Confusion over the authority of a ship’s master over his vessel in port has been identified as a factor in a cargo ship fire which took seven days to extinguish at Napier Port.

The fire broke out in the hold of the Kota Bahagia during the unloading of wind turbine components on the morning of December 18, 2020.

Ironically, the port company was at the time holding its annual meeting at the Napier War Memorial Centre, less than a kilometre away but out of sight of the drama and the billowing black smoke which led to a warning to homeowners on Bluff Hill and surrounds to keep doors and windows closed because of the risk of possibly toxic fumes.

Ultimately, while four shore-based workers had been working in the hold gas-cutting to free braces fitted to keep the cargo in place en route to Napier, no serious injuries were reported during the outbreak nor the seven days before the fire was finally extinguished.

Hot-work precautions were not fully implemented by the ship’s crew.

One of the two recommendations from the report was to ship operator Pacific International Lines to take further steps to ensure that the safety precautions prescribed in its Safety and Emergency Manual are implemented effectively on board its vessels.

The commission reiterated two recommendations it made in 2018 to Fire and Emergency New Zealand (FENZ) following a ship fire at Tauranga.

Acting chief investigator of accidents Naveen Kozhuppakalam said that responding to the fire, Fire and Emergency NZ took charge of the unified command team – the ship’s crew, FENZ firefighters, and the port authorities. The ship’s master followed FENZ’s orders and evacuated people from the ship.

But “valuable time” was lost because Fire and Emergency NZ staff didn’t initially give due regard to the master’s command status and knowledge of the ship and its systems, Kozhuppakalam said.

“The ship’s master knew that the crucial firefighting tactic was to close the cargo hold cover and release carbon dioxide into the hold,” he said, adding the master tried to convey the tactics to the Fire and Emergency NZ officer in charge.

“To close the cover, the crew needed to go back on board to hoist a crane wire and container spreader out of the hold.

“The commission found that suppression of the fire was further delayed because the parties involved lacked a shared and consistent understanding of each other’s roles and objectives,” Kozhuppakalam said.

The response to the fire on the Kota Bahagia revealed safety issues similar to those identified by the commission in its November 2018 report on a fire on the Kokopo Chief in Port of Tauranga.

Accepting TAIC’s recommendations in that report, Fire and Emergency NZ indicated they would complete reviews in 2019, but the reviews had not been completed by the time of the Napier incident.

“To completely implement the commission’s 2018 recommendations, Fire and Emergency NZ needs to urgently update its training regime to include the latest procedures and guidance for fighting fire on board ships,” said Kozhuppakalam.

“The commission welcomes Fire and Emergency’s safety actions so far, which include new documents that the status and authority of the master; new procedures for fighting fires on ships; and work with ports to formalise firefighting collaboration.”

While the commission identified no safety issues with Napier Port’s response to the Kota Bahagia fire, it welcomed Napier Port’s proactive safety actions, with fire hydrants and firefighting equipment having distinctive new markings, and the port strengthened relationship with FENZ including formalised firefighting tactics, site orientation and emergency simulation exercises.

The 161-metre Kota Bahagia, launched in 2011 and under the Singapore flag, had significant damage, including the twisting of steel.

Declared seaworthy again, it was in port for two months before the last of the cargo was unloaded, some of it undamaged, and the ship sailed abroad for repairs and being restored to service.