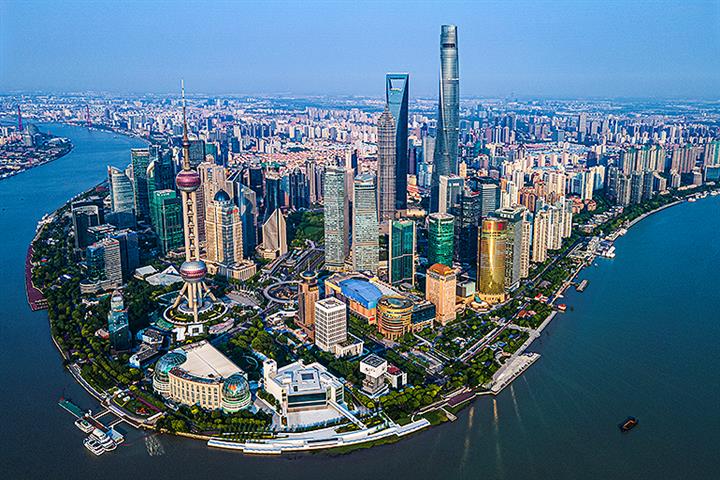 (Yicai Global) June 21 — As Shanghai builds itself into an economic, finance, trade, shipping and hi-tech research center of global influence, the city will continue to attract many multinationals to set up their regional headquarters in the city. But in order to keep ahead of the game amid an uncertain world economy, Shanghai must not rest on its laurels even after it achieves these goals and should continue to improve on them.

Shanghai Mayor Gong Zheng presented certificates to 30 new regional headquarters and 10 new R&D centers of multinational companies at a ceremony on June 15. It is the 35th batch of such awards and proof that the latest wave of Covid-19 did not dent foreign enterprises’ confidence in the city. Shanghai was home to 848 multinational regional headquarters and 512 R&D centers as of the end of May.

“Having Huf Group’s regional headquarters in Shanghai is the result of the firm’s over-20 years of development in the city. China is one of the German car lockmaker’s most important markets, so Shanghai is our best choice,” Senior Vice President Thomas Rene Bunke said. Shanghai has big advantages in terms of human capital, science and technology innovation as well as access to the China market.

Shanghai has been a preferred business location for multinational companies for years. As the economic center of China, this mega city has become an international economic, finance, trade, and shipping center, and formed a basic framework for a science and technology innovation center with global influence.

Yet Shanghai is facing increasing competition due to the complex global situation. “Completing the construction of these hubs does not mean the job is finished,“ Quan Heng, a researcher at Shanghai Academy of Social Sciences, told Yicai Global. The city must continue to improve on the centers’ functions based on the existing framework by enhancing the allocation of global resources and other means, he added.

Shanghai will build itself into an international trade center to leverage its strengths as an international economic hub. Its policies on the inflow and outflow of funds, financing both at home and abroad, cross-border data flows, entry and exit of employees as well as easy customs clearance, are attracting multinationals to locate their Asia-Pacific and global headquarters to the city and at the same time cultivating a new generation of enterprises in Shanghai.

L’Oréal Group said in May that it will form an investment firm in Shanghai, the French cosmetics giant’s first in the country. “L’Oréal’s 25-year development in China has proven that the country is a key driving force for the company’s growth,” Chief Financial Officer Christophe Babule said. China’s unique ecology for science and technology innovation and digital marketing has become one of the sources of inspiration for the firm’s future innovations, he added.

German software giant SAP, which has its R&D and global headquarters in Shanghai, said on June 9 that it will set up a “Sustainable Development and Practice Strategy Alliance” to help Chinese companies achieve their carbon peaking and neutral goals faster.

The Covid-19 pandemic is making companies reconsider the future of green development and is serving as a driving force for companies’ digital transition, Huang Chenhong, global executive vice president and president China of SAP, told Yicai Global. There are more opportunities than challenges, and multinationals like Walldorf-based SAP have more confidence than concerns. China will remain the biggest engine for the world’s economic growth, he added.

Some 98,000 foreign-funded companies had set up a base in Shanghai as of the end of May, one of the highest concentrations in the country, and the number is growing steadily at a rate of between 8,000 and 9,000 a year, according to official data.

Shanghai is becoming more influential and more capable as an international finance center as it accelerates the two-way opening-up of the inter-bank bond, foreign exchange and currency markets.

“Shanghai must enhance the driving effects of high-tech innovation on trade, especially in digital and cross-border trade where it needs to increase resource allocation,” Quan said. The Lingang New Area is doing a big stress test on the digital economy, which will promote high-quality development of the city’s trade and economy.

In order to become a world-leading international shipping center, Shanghai has set itself the goals of raising its container handling capability to 47 million twenty-foot equivalent units a year by 2025 and annual air passenger throughput to more than 130 million passengers.

To achieve these targets, Shanghai must persist in regional collaboration and enhance partnerships between ports in the Yangtze River Delta region, which encompasses Shanghai and surrounding areas, and shipping companies. For instance, the city penned an agreement with neighboring Zhejiang province on June 15 to commence the construction of the Xiaoyangshan North Operation Zone this year.

Shipping companies have been speeding up regional collaboration against the backdrop of the latest round of novel coronavirus outbreaks. China Cosco Shipping, for instance, helped to unblock the logistics bottlenecks by using water ways and railways to replace road transportation. It created direct shipping routes from the Yangtze River Delta region to Shanghai and Ningbo in southeastern Zhejiang province by relying on a great many widespread barges in the region, the shipping giant said.

Shanghai has developed plans for the next five years to upgrade its science and technology innovation center. It will spare no effort to become an import source of new scientific discoveries, new technological inventions, new industrial directions and new ideas for development by 2025.

Innovations must be promoted worldwide to intensify global competition. But the biggest challenges to building a science and technology innovation center are internationalization, talent flow and regional cooperation, Quan said.