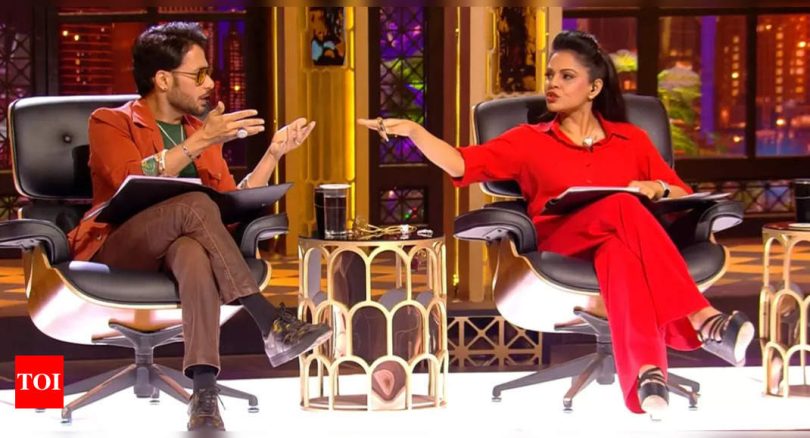 In the latest episode of Shark Tank India 2, Aaditya Fatehpuriya and Raghav Goyal introduce Sharks to their business of custom ‘iced out’ jewellery and sterling silver products. They boast of supplying to celebs, rappers and sportspersons. Their jewellery is for Gen Z and millenials. They share how they came up with the idea and reveal their father has been into gems and jewellery business since the last three decades. They show samples of their jewellery to Sharks and explain their business. Since they are just 19, they fail to answer a few questions by Sharks. They ask for Rs 50 lakh for 3.3 percent equity.
Namita Thapar finds their price point high, target audience small and existing brand by father as sufficient for growth. She opts out. To make his point, Anupam Mittal begins by saying that people who come from wealthy families like Namita have less hunger. Namita stops him there. She says it’s an individual thing and nobody should stereotype. She adds that she has been taunted by one Shark or the other for being rich. Anupam shifts focus back to them and tries to gauge their vision. He applauds them and gives them an offer of Rs 1 crore for 10 percent. Aman Gupta, Peyush Bansal and Vineeta Singh get together and offer Rs 50 lakhs for 10 percent. The two choose Anupam.

Next are the founders of consent and promise based app that tracks credit repayments, Gaurav Kundra and Gaurav Sharma. The app offers real time update. The two boast about having 2.75 lakh registered users. They explain how their business works. Anupam finds them very dramatic and calls them good actors. They joke about watching the previous season for their pitch. Their ask is Rs 50 lakhs for 5 percent.
Anupam tells them it’s a regulated industry and scores can’t be put openly. The founders explain that they haven’t involved wallet and other platforms into the system. However, they are unable to answer the transactions that have taken place so far and admit their admin panel has not been created yet. All the Sharks opt out. Peyush says they would have to get into depth and regulation. Aman feels they are not strong players. Namita says she is unable to understand their business. Vineeta adds this business is B2B, stats business and is not investable yet. Anupam feels there is no product market fit and no exceptionalism. When Gaurav expresses his disappointment, Namita tells them that they have invested in pre revenue founders but they lack clarity.

The last to walk in are Pratheek Palanethra and Vishwanath HK who are founders of non-electric and eco-friendly bowling machines. The USP of their product is that it’s lightweight and speeds up to 140 KMPH. They have sold in 15 countries. They want to offer better training experience to bowlers and infrastructure. Both of them are passionate cricketers. They share how they have divided their responsibilities. Their ask is Rs 75 lakhs for 7.5 percent equity. They give a demo to the Sharks but fail to impress. Pratheek and Vishwanath feel they can fix the issues in the non-electric version. They dissect the selling price for Sharks and reveal they are running in losses currently. They also have no clue about their competitor’s business.

Anupam says he is surprised that they are not aware of competition despite being in the market for 5-6 years. He doubts their business acumen. Aman is not convinced. Vineeta doesn’t want to participate yet. Peyush tells them individually people won’t spend so much but academies might take it, and adds it’s early stage for the valuation they want. Anupam feels there’s no demand for it. Namita is confused but thinks of taking a bet. Both the parties settle at Rs 50 lakh for 7.5% equity with a debt of Rs 25 lakh @10% interest.