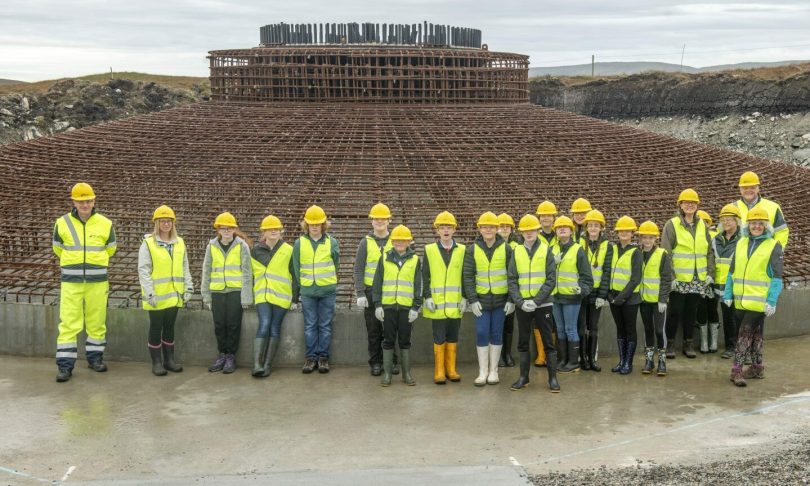 By the end of October, Viking Energy Wind Farm will have hosted 15 different schools from across the islands.

Children and young people aged five to 17 who visit the site are given a bus tour and the opportunity to name a turbine. They are also given the chance to fill a time capsule that will be buried around their chosen turbine’s base.

Anne Bennett a science teacher at Brae High School who visited the site with her class on Wednesday said they enjoyed “seeing it up close”.

She added: “I can teach my pupils about the science behind renewable energy, but nothing beats seeing it first-hand. I commend the Viking Wind Farm team for hosting such an engaging and enjoyable experience.”

The project was developed as a joint venture between SSE Renewables and the Shetland community but has been owned solely by SSE since 2019.

Although originally opposed by campaigners, construction on the site is continuing and will consist of 103 wind turbines.

He said: “The team in Shetland are rightly proud of the work taking place at Viking and want to share progress with the community in a worthwhile and educational way.

“The climate emergency is real, and we want to show young people the benefits of wind energy and who knows, hopefully some of them will be inspired to be the renewable energy engineers of the future.”

Mr Hastings added they would continue to support many initiatives in the local community such as rolling out educational programmes.

She said: “It has been fantastic to see the children and young people learn about the project and to answer their questions.

“We are looking forward to hosting a further nine visits between now and October at which point more than 550 pupils will have joined us on site.

“We look forward to continuing to collaborate with schools and other groups from the community to share what is happening with the project and to contribute to community life throughout Shetland.”