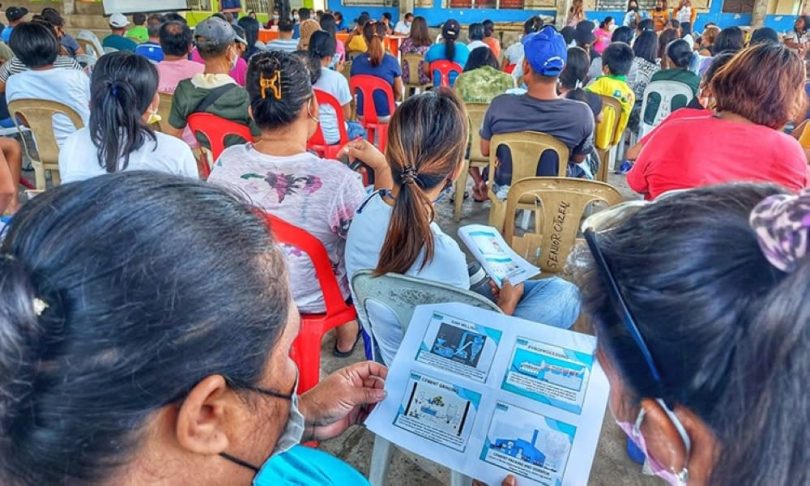 THE proposed construction of a cement manufacturing plant, pier and a quarry in the town of Sibonga in southern Cebu may not push through should residents continue to oppose the projects due to their impact on the environment and other concerns from the community.

Residents in Barangay Sabang raised on Sunday, June 19, 2022, several concerns and questioned the representatives of the proponent, Bayan Cement Producers Corp., during a public hearing held at the covered court in the barangay.

The first question asked to the proponent was whether local residents would be prioritized for employment upon the projects’ construction and operations.

Representatives were even asked to provide statistics on how many local residents in the town of San Fernando and City of Naga have been given employment by the suppliers and cement producer companies operating in the said local government units. Bayan Cement has no existing plants in San Fernando and Naga.

The data would be one of the bases or considerations before the Sabang residents would either accept or reject the projects proposed by Bayan Cement.

Mark Anthony Genayas, mechanical engineer of Bayan Cement, estimated the projects’ cost to be from P10 billion to P15 billion, adding that the start of the construction would also depend on the decision of the stakeholders.

But it seems that Sunday’s public hearing was a mere formality as Sabang Barangay Councilor Edgar Bisorro Anuada said in a separate interview that they would soon adopt a resolution in the Barangay Council as soon as possible, to greenlight the application of Bayan Cement and ask the Municipal Council to approve the company’s projects.

Anuada said the public hearing in the barangay was just part of the process of the local government unit.

Bayan Cement representatives assured the residents that 80 to 90 percent of their employees for the proposed projects would come from the local residents “as long as they are qualified.”

They said the process of hiring would also be conducted through the Municipal Government, and not all jobs would require that employees be skilled workers or degree holders.

Local non-government organization member Fe Abiera asked the representatives to provide a copy of the Environmental Impact Assessment, public scoping and mineral production sharing agreement, to ensure that the company went through a legitimate process.

Abiera, a member of Unifying Sectoral Responses for Environmental Protocols in Sibonga’s board of trustees, also questioned the conduct of the public hearing on a Sunday and why Bayan Cement was the one that called for such a hearing when it should be the barangay.

Anuada, however, clarified that they were the ones who called for the public hearing, not Bayan Cement.

Venice Cyrus Rebadomia, Bayan Cement’s corporate legal counsel, also said that it was the barangay that told them to conduct the hearing on a Sunday so that more residents could attend, and they agreed to it because they also wanted several people to be present.

Rebadomia said they have secured an Environmental Compliance Certificate (ECC) from the Department of Environment and Natural Resources.

The company is on the second stage on the exploration permit that it has applied for from the Mines and Geosciences Bureau (MGB).

In response to the concerns on air pollution and possible landslides, Lysa Inot-Saramosing, chemical engineer of Bayan Cement, clarified that their main business is not quarrying but cement production.

The cement plant project would also affect portions of Barangays Mangyan and Candaguit. But the biggest part of the land that had been bought by Bayan Cement is in Barangay Sabang.

Should the construction of the cement plant push through, the plant area is expected to be 16 hectares including the crushing plant while the production capacity is expected to be 660,000 million metric tons per year (MTPY) of clinker in Barangay Sabang. The total mining area is 410.47 hectares with a quarry extraction rate of 528,000 MTPY of limestone in the three barangays.

The pier, which will also be located in Barangay Sabang, is expected to be 2.2 hectares. Bayan Cement representatives assured that the mangroves will not be affected if the construction pushes through.

Saramosing said the projects aim to promote countryside development and economic growth; provide employment and livelihood to the locals; and generate incomes for both local and national governments.

Bayan Cement representatives assured the residents that they will allocate about three percent of the direct mining and milling cost for the Environmental Protection and Enhancement Program.

The proponent said they will ensure maintenance of access road and quarry benches; provision of an adequate siltation pond and drainage system, including road and quarry site road sprinkling; establishment of buffer zones; and conduct of planting local tree species and research for appropriate plants.

Bayan Cement also vowed to allocate 1.5 percent of the operating cost for the Social Development and Management Program (SDMP) every year.

Of the SDMP, 75 percent would go to the community development (livelihood, education, infrastructure, health and sanitation, cultural, religious and value-enhancement activities), while 15 percent would be for the information and education campaign (meeting and posting) and 10 percent for the development of mining technology and geosciences (scholarships and/or donations).