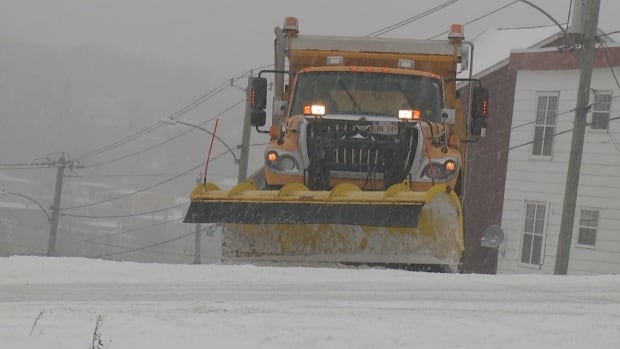 Parts of New Brunswick were contending with slick roads, messy conditions and a few crashes after snow started falling early in Wednesday afternoon.

Because of bad conditions, according to the map, travel is not recommended on the Trans-Canada Highway from around Prince William through the Fredericton and Oromocto area and to Gagetown.

More southern parts of the province show bare roads with dry or wet conditions, according to the map, but most other areas of New Brunswick show partly covered roads.

Ouellette said he wasn’t aware of any road closures.

But in the greater Fredericton area, vehicles slid off the road in some places, and traffic was moving slowly.

The City of Fredericton put out a notice to residents advising them to clear off their vehicles, plan ahead and “drive to the conditions of the road.”

Ouellette said drivers should pay attention to the roads and stay off them if conditions warrant.

“If it’s really bad out there, then we’d recommend that you you stay home and maybe consider driving at another time,” he said. “But if you absolutely do have to go out, and the conditions are quickly still deteriorating, then we ask that you check 511 before you take off.”

Snowfall started around noon in the southwest Wednesday, then spread to central and northern areas in the afternoon.

The most intense snowfall is expected to coincide with the evening commute for many areas, causing difficult driving conditions.

This is the second major snowfall of the season for New Brunswick. Schools in northwestern New Brunswick were closed Monday because of road conditions and thousands of customers lost power after around 20 centimetres fell. But for southwestern and central regions, this is the first storm of the season.