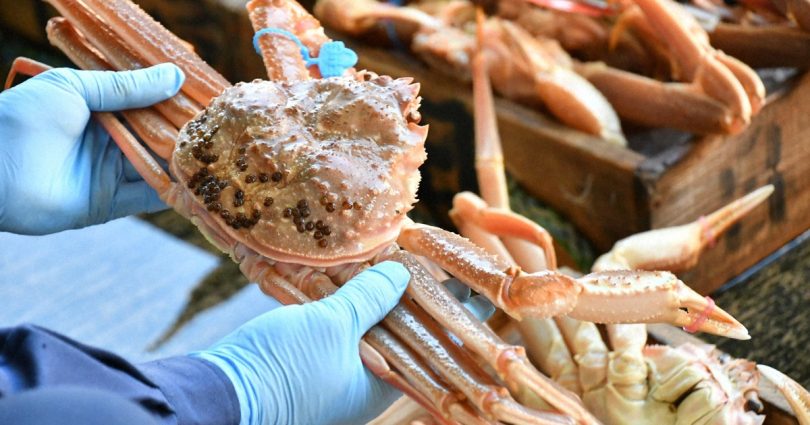 
The highest bid was for a “Matsuba gani” male snow crab, which was auctioned off at Shibayama Port in the Hyogo Prefecture town of Kami.


According to the prefectural Tajima fisheries office, a total of 39 vessels from five ports in the northern part of the prefecture set out and cast their nets simultaneously at 12 a.m. on Nov. 6.


Seven vessels returned later that day to Tsuiyama Port in Toyooka, where reddish-brown male Matsuba gani crabs and pale vermilion female “Seko gani” crabs were sorted according to size and condition. A large number of people surrounded the boxes full of crabs, and the auctioneer’s voice echoed outside the market, as about 25 middlemen bid on the crabs one after the other.


Those involved in tourism and food industries in the prefecture are raising hopes that the easing of COVID-19-related movement restrictions and boarder control measures, as well as the “National Travel Discount” program, will bring the bustle back to the area. Crab festivals will also be held at several fishing ports for the first time in three years, starting with the Hamasaka fishing port in the prefectural town of Shinonsen on Nov. 13.