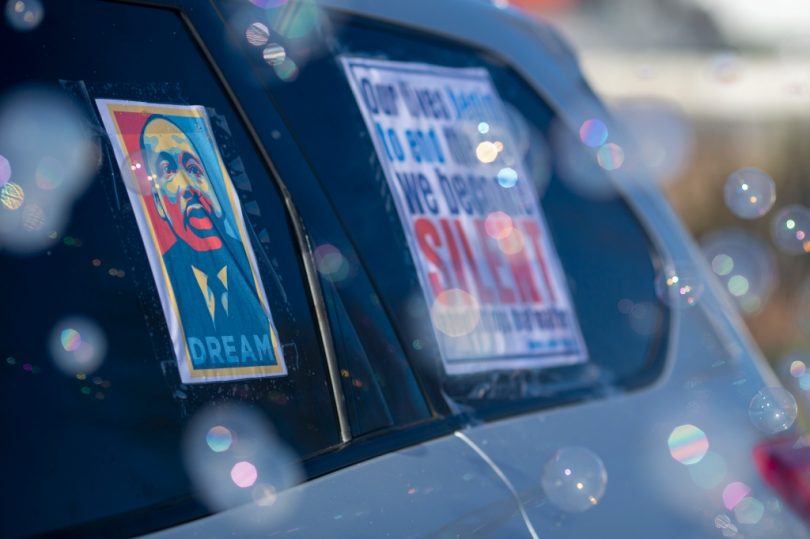 Hayward has celebrated Martin Luther King Jr.’s birthday for decades, but for the second year in a row, the day will not be marked in person because of the pandemic.

Now, the committee in charge of the event is considering combining it with the city’s Juneteenth celebration.

Hayward organizers made the decision this week to cancel an in-person celebration Monday. They are not the only ones postponing celebrations or moving them online.

The Oakland Museum of California is postponing its ” Art of Reparations MLK Day Showcase.” The immersive experience, featuring student and community artwork, youth speakers from the MLK Oratorical Festival, performances and film screenings, will be rescheduled at a later date.

Caltrain also announced they would be canceling this year’s Celebration Train and pointed the public to online events through the Northern California Dr. Martin Luther King, Jr. Community Foundation.

The East County Branch of the NAACP has moved its Contra Costa County celebration of King’s birthday online.

Freddye Davis, president of the Hayward South Alameda County NAACP and a member of the King celebration committee, is optimistic about combining that city’s King celebration with Juneteenth.

“I think it will work wonderfully, because the city of Hayward truly supports the Juneteenth celebration and they have always supported the Dr. Martin Luther King birthday celebration,” Davis said.

The committee is reaching out to the Juneteenth organizers to see if there’s “synergy” there, said Chuck Finnie, Hayward spokesman.

On the actual holiday, Jan. 17, Hayward will be airing a recording of last year’s celebration on KHRT cable TV channel 15 and the City’s YouTube channel starting at 4:30 p.m.

“This year we were optimistic as we headed through the summer and the fall, thinking we would be able to have a live event,” Finnie said. It “started to become unrealistic and kind of lost its viability as the omicron surge of the coronavirus really picked up steam.”

The event typically has three components: a keynote address, a community award and a musical tribute, with the talent for that coming mostly from the Hayward Unified School District.

The committee is still debating when it will announce the winner of this year’s community award. According to Davis, the committee will be meeting to decide that in about a week. South Hayward Parish executive director Ralph Morales was the last winner in 2020.

Other MLK Jr. Day events are also seeing postponements and a move to virtual because of the increase in COVID-19 cases.

The East County Branch of the NAACP had planned to have a prayer breakfast at Martin Luther King Jr. Junior High School in Pittsburg. Proof of vaccination would have been required and attendance would have been limited to 100 guests only. Over the weekend, it announced that the event was moved online.

The virtual event will have several speakers, including Contra Costa County District Attorney Diane Becton and the Rev. Kirkland Smith. Organizers considered postponing the event like Hayward is doing, but they’re confident that they have folks who are savvy about putting on virtual productions, according to a spokesperson with the organization.

The Contra Costa Health Services Department also released guidance on how to celebrate the holiday over the upcoming weekend. It recommends celebrations be moved outdoors, and that people keep a safe distance of at least 6 feet and consider wearing a mask.

“Contra Costa is experiencing a sharp spike in new COVID-19 cases, fueled by the highly contagious omicron variant,” Contra Costa Health Services wrote. “The number of people hospitalized in the county with the virus has nearly doubled over the past two weeks.”