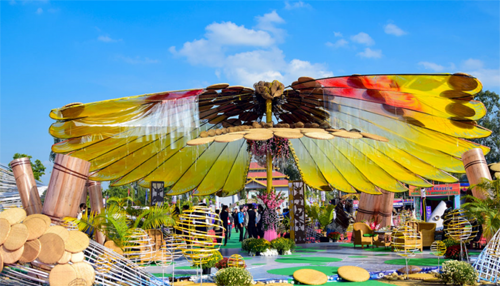 Our Correspondent
Imphal, Nov. 6 (EMN): Preparations for hosting of Manipur Sangai Festival 2022, an annual tourism extravaganza promoting the rich cultural and traditional activities of the northeastern state, is in full swing.

The festival is scheduled to be held from November 21 to the 30th.

Manipur Chief Minister N Biren Singh, who is spearheading the various preparation activities of the festival, appealed to the people to prepare for the festival and also to extend hospitality to visiting tourists.

Sharing a teaser video for the upcoming Sangai festival 2022 in a tweet on Sunday, the chief minister wrote, “Get ready to witness the biggest ever Sangai Festival, filled with the celebration of diversity, rich culture, local cuisine, adventure sports, entertainment and many more. Come, visit the Manipur Sangai Festival from 21st Nov-30th Dec, 2022.”

On November 4, the chief minister also launched a promotional campaign in Imphal where he mentioned that many ambassadors and foreign diplomats have confirmed their participation in the festival.

The promotional campaign is focused on boosting tourists’ arrival to Manipur during the state’s biggest tourism festival, which aims to highlight the unique cultural diversity of the state and its tourist attractions.

According to commissioner (Tourism), PK Jha, this time the Sangai festival will be held at several new venues across the state and the government is expecting lots of national as well as international tourists.

The festival will be inaugurated at the newly-developed Sangai Ethnic Park at Moirang Khunou near Loktak in Bishnupur district, while the closing ceremony will take place at Bhagyachandra Open Air Theatre and Hafta Kangjeibung in Imphal.

The other venues of the festival include Manipur State Film Development Society, Ibudhou Marjing, Mapal Kangjeibung, Khuman Lampak, Food Park (Nilakuthi), Koirengei, Kangla Polo Ground and City Convention Centre – all in and around Imphal, Mao and Makhel in Senapati district and Khuga and Behiang in Churachandpur district.

On October 23, Kolkata had already hosted a curtain-raiser event at Salt Lake City Centre to share the uniqueness of Manipur beyond her borders.

Manipur is a popular tourist destination among the Northeast states for Loktak Lake, the largest freshwater lake in Eastern India; Keibul Lamjao, the only floating park in the world and home to Sangai, a rare deer; Mapal Kangjeibung, the oldest living polo ground and Shirui peak, home to the state’s flower ‘Shiuri lily.’