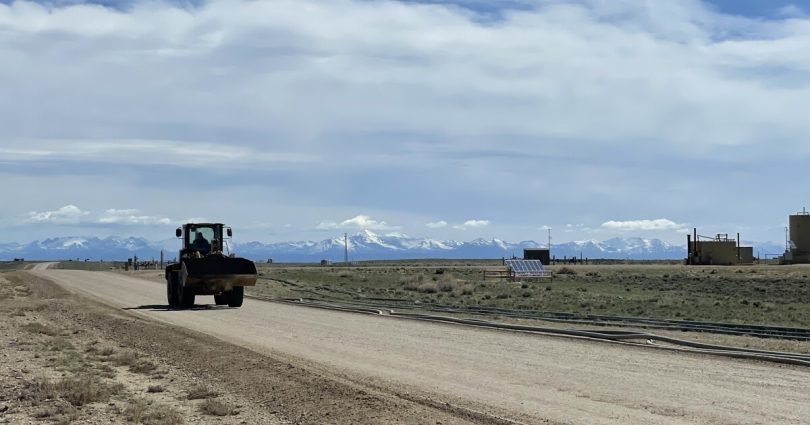 Standing out on the Jonah Field in Sublette County one sees a sea of sagebrush – it’s 24,000 acres. Back in the 90s, it was regarded as one of the largest onshore natural gas discoveries in the world.

Some antelope, cows and wild horses graze in the distance.

But mostly, one sees hundreds of natural gas well pads checkered across the land – all tan in color.

The field feels pretty calm and quiet. That calmness is a stark difference from 15 years ago during the gas boom.

“In Jonah’s heyday, we had 18 rigs running, thousands of individuals out here working on behalf of the field,” Paul Ulrich, Jonah Energy’s vice president of Government and Regulatory Affairs, said. “It was at times overwhelming and exciting. No question about it.”

Ulrich said things have leveled out now. It is how he envisions the long term future of drilling in Wyoming. There is now just one active drilling rig in the area.

But, there are plans to steadily expand in the future. And expansion like that is what a lot of environmental groups take issue with.

“As we do the important work to move away from oil, the first thing we need to do is to stop looking for new oil,” Dan Ritzman, Sierra Club’s director of the Lands, Water and Wildlife campaign, said.

Neither environmental groups nor the industry are satisfied with the terms of the sale. Conservation groups from eight states issued letters of protest back in May arguing that no new leases should be sold for development.

“As we look at these upcoming lease sales across the West, we know that our public lands are one of the biggest producers of greenhouse gasses in the country,” Ritzman said.

Some leases being offered in Sublette County would allow for gas exploration on the last remaining areas of winter sage grouse habitat that hasn’t been sold off to the industry. Linda Baker, executive director of the Upper Green River Alliance in Pinedale, said some areas need to be left alone.

But, the oil and gas industry is not satisfied with the upcoming lease sale either. The Bureau of Land Management (BLM) is offering only a third of anticipated leases.

The Petroleum Association of Wyoming (PAW) objects to that reduction in leases. PAW President Pete Obermueller said the parcels that are offered are in inconvenient locations.

“Many of them are in some of the most remote, most difficult places to reach,” Obermueller said.

Additionally, some of the existing leases sold between 2015 and 2020 are under National Environmental Policy Act (NEPA) review, which is why they are not being drilled.

A federal judge approved a settlement earlier this month that will require environmental reports to be redone on 2,000 leases in Wyoming, as the reports did not show the effects new leasing has on the climate – something the judge ruled is required under NEPA.

“This opens the door to take into consideration things like climate science, the public interest and whether it makes sense for Wyoming public lands to be sacrificed for more oil and gas extraction,” said Jeremy Nichols, the climate and energy program director for WildEarth Guardians, which led the lawsuits.

But, Ryan McConnaughey with PAW said it is a misinterpretation, and that NEPA does not specifically mention “climate change.”

“Organizations are using it to halt all mineral production in Wyoming and across the West,” he said. “And so we believe that Congress needs to make sure that it’s used for its original purpose, which is making sure that production happens in an environmentally sustainable way.”

Paul Ulrich with Jonah Energy said several of the company’s leases will be affected by this ruling.

The upcoming oil and gas lease sale in Wyoming is slated to begin Tuesday. It is unclear whether the Biden administration plans to return to quarterly lease sales. A related court case is pending.