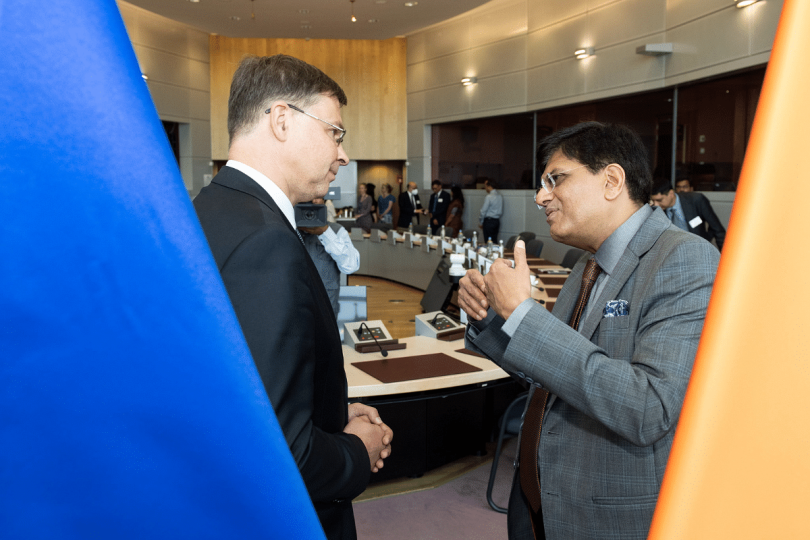 In quick succession to the significant gains at the World Trade Organization’s Ministerial Conference (MC12), India will make a fresh start with the European Union (EU).

They will come together at another negotiating table to bring to fruition the much-procrastinated India-EU Free Trade Agreement (FTA). This is after a gap of about nine years since the earlier negotiations were left off in 2013 due to a difference in the scope and expectations from the deal.

India and the EU will also begin negotiations on an investment protection agreement and an agreement on geographical indications in the first round of talks for all three agreements from 27 June to 1 July 2022 in New Delhi.

The first round of negotiations — to begin on 27 June in New Delhi, as announced by Commerce Minister Piyush Goyal and Valdis Dombrovskis, Executive Vice-President of the European Commission — is well timed with a build-up of India’s recent FTAs with Australia and the United Arab Emirates (UAE) in record time and a slew of ongoing talks with Canada, the United Kingdom (UK), and Israel, among many others.

Expectations towards a resumption of the talks for an FTA have been building up since 8 May 2021 when, at an India and EU leaders’ meeting held in Porto, an agreement was reached for restarting negotiations. The process gained traction with the Delhi visit of the European Commission President Ursula von der Leyen in April 2022 and Prime Minister Narendra Modi’s recent visit to Europe, and helped in defining a clear roadmap for the negotiations.

The new energy is matched by positive vibes from both India and the EU witnessing important multilateral outcomes in MC12 in Geneva with a key role by the EU, notably on fisheries, pandemic response, e-commerce, and WTO reform. Dombrovskis has also appreciated Goyal for helping to achieve those results after “working very closely together to ensure that MC12 was a success.”

In the last decade, the EU-India trade in goods has increased by 41 per cent and trade in services has increased by 76 per cent. Trade in services between the EU and India reached €30.4 billion in 2020. The EU is one of the largest investors in India, accounting for 16 per cent of total investments received between 2015-20 (€83 billion in 2000-2021).

There are 4,500 European companies operating in India, contributing to the creation of over 1.5 million direct and five million indirect jobs in the country.

While both India and the EU are equally interested in a balanced, ambitious, comprehensive, and mutually beneficial FTA to diversify and secure supply chains as well as boost economic opportunities for businesses and benefits to the people, the stakes for India are high after walking out of the Regional Comprehensive Economic Partnership (RCEP). Success with the EU will help boost credibility as an open and outward-looking economy.

Moreover, for India, this will be the most significant FTA as the EU is its second-largest trading partner. India-EU merchandise trade registered an all-time high value of $116.36 billion in 2021-22 with a year-on-year growth of 43.5 per cent. India’s export to the EU jumped 57 per cent in fiscal year (FY) 2021-22 to $65 billion. The EU accounted for almost 11 per cent of Indian trade in 2021.

On the flip side, India is the EU’s 10th most important trading partner, accounting for just over 2 per cent of EU trade in 2021. This relatively small share of overall EU trade in goods points to a large untapped potential. India should leverage the FTA to create a stronger presence for itself in the trade arithmetic.

Considering that both partners have similar fundamental values and common interests and are two of the largest open-market economies, a broad-based, balanced, and all-embracing process of negotiations could well be seen as a done thing, market access issues could prove to be a contentious affair.

As is the case in all EU trade agreements, the future arrangement will also include ambitious and enforceable provisions on trade and sustainable development, helping the EU to reach its climate goals under the European Green Deal, and promote high environmental and labour standards in the EU and India.

India has been asking for Mode 4 access for its service professionals in the EU, for which some changes have taken place, like the EU has allowed for movement of intra-corporate transferees within the EU. Earlier, this required a separate visa. But this is generally available for 90 days. India’s demand for Mode 4 access may face tough resistance during negotiations and be a stumbling block.

Some of the key areas where talks were stalled last time, vis-à-vis trade in goods, were duties on alcoholic beverages, automobiles, and dairy products.

For alcohol, tariff liberalisation measures like having a threshold price, as was done by Japan for Australian wines under RCEP, is a way out. Dairy is a complicated matter since both the EU and India are large dairy markets with a steady rise in production. In automobiles, the challenge comes from India having different trading partners, like Japan and South Korea, active in the sector that may seek a level-playing field if India offers more market access to the EU.

Further, the EU has sought massive cuts in India’s tariffs on automobiles and auto components and Indian industry is wary of tariff cuts flooding the domestic market with European cars and hurting investment and the “Make in India” campaign. Besides, auto components may end up being imported into India at concessional rates.

Reaching an agreement with an advantage for both is set to be a long haul, but with renewed intent and changing global dynamics, the deal may come through.