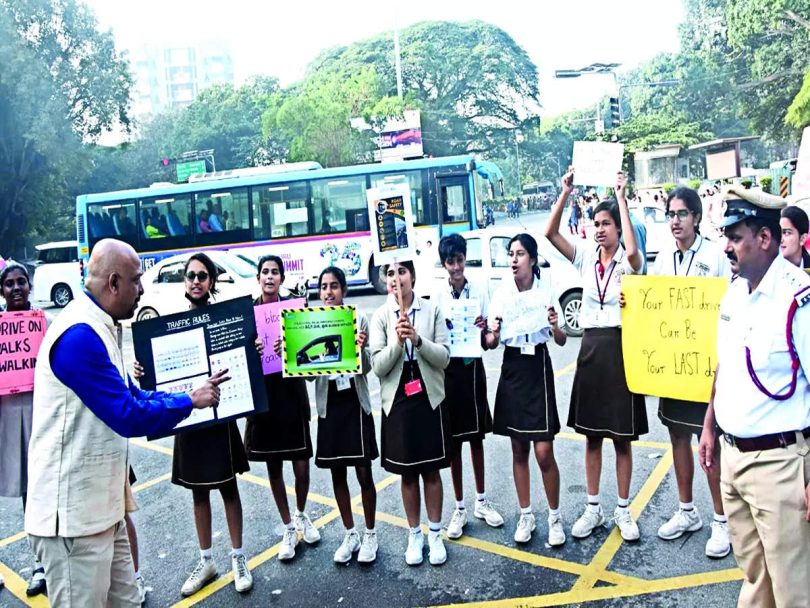 More than 100 students of took to the roads on Wednesday to spread awareness on road safety.

The students stood on footpaths between the Basaveshwara Circle and holding placards carrying messages on road safety.

The campaign was organised by in association with the and Sophia High School.

8The program was flagged off by , .

The junction is notorious for its high traffic movement and several violations have occurred where people were found speeding or breaking the traffic signal rules.

They held cards like, “Brake before you break”, “Drive slower, live longer”, “Speed thrills but kills”, “Brake haki, horn yake”, “Alert today, live tomorrow”, “Don’t drive on sidewalks, it’s for walking, “Kill your speed, not others”, and many more.

The students even took a pledge on road safety and promised to continue creating awareness to citizens of Bengaluru.

Vinod Jacob, the General Manager of Namma Foundation said, “Road safety is not only about wearing your helmet and seat belt but about following all the traffic rules when you are driving. It’s important to look out for other motorists and pedestrians and the safety of all.

“We are having the road safety awareness drive to create awareness among the public to follow traffic rules and ride safely so as to make Bengaluru roads safer for everyone. Better lane

discipline, no one-way entry, no signal jumping and no parking on main roads are crucial to reduce traffic accidents and traffic jams.”