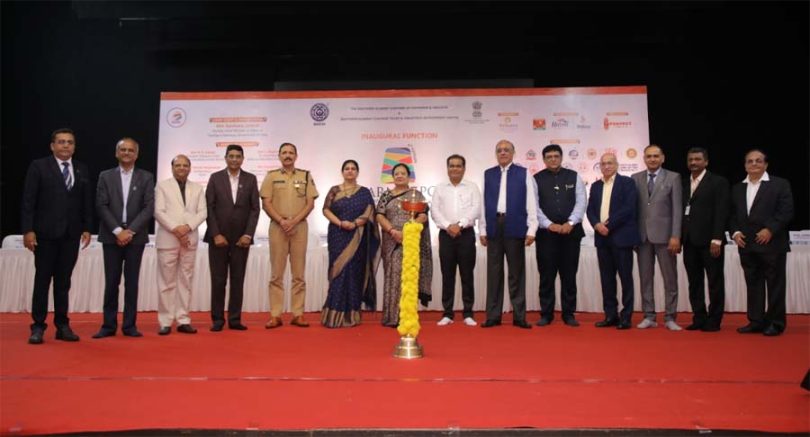 Whatever yarn is required for new products to attract world market will be available to yarn manufacturers from Yarn Exhibition of Chamber: Chamber President Himanshu Bodawala

Yarn Expo – 2011 is being organized at Sarasana Convention Center from today 20th to 21st and 21st August, 2022 under the initiative of Dakshin Gujarat Chamber of Commerce and Industry and Dakshin Gujarat Chamber Trade and Industries Development Centre. On Saturday morning at 10.00 am, Yarn Expo-2022 was inaugurated by Darshanaben Jardosh, Union Minister of State for Textiles and Railways of India.

Union Minister of State for Textiles and Railways Darshanben Jardosh said that 20 crore national flags were unfurled in the country under the ‘Har Ghar Tiranga Abhiyan’. Out of which 7.5 crore flags have been made in Surat and have enhanced the pride of the tricolor. Now the industries have to move towards self-reliance and this initiative has to be taken by Surat itself. MMF has to be supported to capture the global market. Therefore, the central government has issued a scheme to support MMF. The government is now making efforts for PLI-2.

Apart from this, the Ministry of Textiles is trying to make a tough claim. The government has come up with PM Mitra Park scheme to bring composite units at one place and under this the Gujarat and Karnataka governments have also allocated budget. Now the government is moving towards making silk from cocoons. While the industry of MMF, technical textile and readymade garments is going to grow, efforts are being made to develop this industry by providing technical support in handloom handicrafts.

Chamber President Himanshu Bodawala said, cotton beige products account for 95 per cent of the total textile exports from India and hence new products have to be created to attract the world market. Whatever yarn will be required for the new products will be available to the manufacturers from today’s exhibition. The special yarns of technical textiles which are to be imported at present should be produced in India. He urged large companies in India to produce high tensile polyester yarn, which is not produced in India and which is used in technical textiles, which is estimated to cost India 5 billion US dollars technical textile yarn imports. being done.

The TUFF scheme has contributed a lot to the development of the textile industry of India. So far, Rs 10,000 crore has been given by the Government of India under the Incentive Tough Scheme. Due to which an investment of Rs 3 lakh crore has come in this sector in the last 20 years. About 85 per cent of the total investment in the textile sector in the last two decades has been attributed to this difficult scheme. For this the entire textile industry thanks the Government of India. When such a tough scheme is over, MSMEs are not treated unfairly in the new scheme and since job working units contribute 60 per cent to the entire textile value chain, such units are also not excluded from the new incentive scheme. and the new scheme is hard-based, as requested by Minister of State for Textiles Darshanben Zardoshan.

Mayor Hemaliben Boghwala said, various threads were seen and learned at the Yarn Expo of the Chamber. Surat not only weaves cloth but also weaves the culture, unity and identity of the country. Surat swam differently in the country under the ‘Har Ghar Tricolor’ campaign to commemorate the elixir of independence.

The chairman of the polyester chain of Reliance Industries Limited, R.D. Udeshi said that the industry is doing very well with the support of the Ministry of Textiles. Now the garmenting capacity is to be increased in the textile sector. He wants to try to realize the dream of fiber to fashion through the Prime Minister.