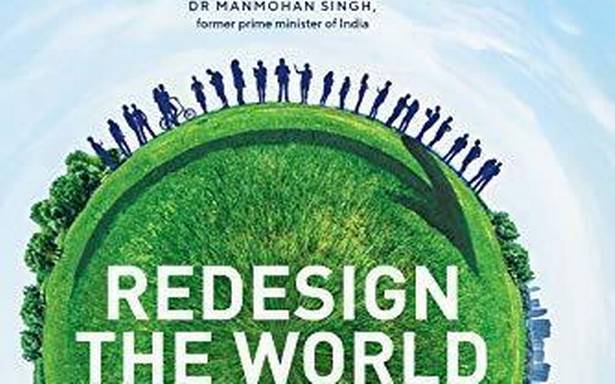 The telecom innovator offers new ideas to change the future, in which people and the planet are at the core of all ideologies

When Sam Pitroda says it is time to redesign the world, you sit up and take notice. He explains why he feels that way in his latest book which is a global call to action. Pitroda has devoted a major part of his life to public service using his vast technical knowledge. He is the founder, investor, chairman of six start-ups and five nonprofit foundations. He holds over 100 patents and 20 honorary PhDs. He is the man who laid the foundation for India’s telecommunication revolution in the 1980s.

To go back to the 80s, it was a period of acute shortages. Many young people will not know how many years we had to wait for a telephone which was seen as a luxury item among many other necessities. Pitroda, born in a small village in rural India in 1942, had never used a telephone till 1964. He worked hard, got his masters degree in physics, specialising in electronics, from Baroda’s Maharaja Sayajirao University and then there was no looking back.

He went to the Illinois Institute of Technology in the U.S. andacquired his masters degree a year later in electrical engineering. He had not only learned to use a telephone but also design an electronic telephone switch. He acquired many patents and became a telecom entrepreneur and a millionaire.

That is when he started looking at India and realised how far behind the country was in telecommunications and information technology. India had fewer than 2,500,000 telephones in 1980, almost all of them in a few big cities, he writes. The telephone was seen as a luxury item with 7% of the country’s urban population accounting for 55% of the nation’s telephones. The country had only 12,000 public telephones for 700,000,000 people, and 97% of India’s 600,000-odd villages had no telephones at all.

Pitroda came down to India and with perseverance was able to meet the then Prime Minister Indira Gandhi and managed to make a presentation to her. More important, he won the trust and interest of her son Rajiv Gandhi, and the rest is truly history.

With Rajiv Gandhi’s backing the Centre for Development of Telematics, C-DOT as it came to be known, was set up. By 1987, it had delivered a 128-line rural exchange, a 128-line private automatic branch exchange for businesses, a small central exchange with a capacity of 512 lines, and it was ready with field trials of a 10,000-line exchange.

Pitroda became the go to man for technology and management for Rajiv Gandhi, when he became the Prime Minister after his mother’s assassination. Several technology missions were launched under him to solve basic problems in five areas — water, literacy, immunisation, oilseeds and telecommunications. In spite of some resistance from the states and bureaucracy, the programmes were launched with great enthusiasm.

Many things went wrong. Rajiv Gandhi lost the elections and when he was staging a comeback he was assassinated. Pitroda had to face many false accusations and the stress led to ill health and he returned to the U.S.

The pandemic and the enforced stay at home set him thinking. He says the world as we know it, is a post World War II creation. When the war came to a close in the 1940s, it was a time of death, devastation and desolation. ‘A small group of enlightened intellectuals from a select group of nations led by the United States of America, conceived the design. The result was the creation of global institutions such as the UN, IMF, WTO, and GATT (General Agreement of Tariff & Trade). Most countries have also adopted economic measurement standards such as GDP, GNP, per capita income, and so on. Countries still follow these rule based systems created more than seven decades ago.’

At the end of the war, China was irrelevant and India was a British colony. It was also a bipolar world. The U.S. and the U.S.S.R. were the two super powers. The U.S. gave itself the right to appoint the president of the World Bank and the Europeans, the managing director of the IMF. The world design was mostly drawn from Western thinking. It was based on five main pillars, democracy, human rights, capitalism, consumption and the military.

In the first part of the book, Pitroda discusses these five pillars giving their historical background and putting them in proper perspective. He traces seven tipping points in the last 75 years which have had a profound impact on people. They are decolonisation, the rise of China, fall of the Soviet Union, 9/11terror attacks, rise of technology, increasing inequality, and COVID-19. He wants to have a collective rethink about what it means to live in these times.

The tipping points he mentions have had a profound impact on the world population in various ways. What particularly affects him is the growing inequality among people in spite of so much progress made. Today 2.7 billion people make less than $2 per day. Two and a half billion people have no access to toilets. The statistics on the difference between the rich and poor are quite dire. There is environmental degradation leading to climate change which is a major worry. Totalitarian regimes are taking over democracies.

Pitroda says COVID-19 which has put us in compulsory isolation has given us a historical opportunity to rethink and redesign the world. As we have hyper connectivity now, it offers us a whole new meaning and a new hope for human development.

He puts forth his ideas on redesigning the world in the second part of the book. He has come up with five new pillars for the world’s redesign which are essentially about a radical form of humanism. They are inclusion, human needs, new economy, sustainability/conservation and non-violence. In this design, people and the planet are at the core of all ideologies and actions must emphasise on science and technology, a rational approach, logical thinking and a new mindset.

Towards a new economy

For example, he describes the changes the new economy can bring about. The main impact of hyper connectivity on the economy will come from among other things, the decentralisation of production and services, setting up of small factories with automation and robots, encouraging local production with local skills and scaling up through the networking of multiple supply chains.

Innovation, Pitroda says, is required in all levels of government, business, and civil society to respond to the new realities of the hyper connected world. We should encourage bio, nano, material, energy and cyber technologies to improve the environment, food, health, transport, infrastructure and comfort. In particular, we should stress on low cost local innovations in developing countries to take technologies to people in rural areas.

This book would have been more exciting if the focus had been on how these ideas can be implemented. Though interesting, too much space has been devoted to the analysis of the last 75 years.

Will there be political will to redesign the world?

Redesigning the world does sound like a utopian and optimistic dream. Pitroda is convinced it is practical and doable.

The reviewer is a journalist and author.