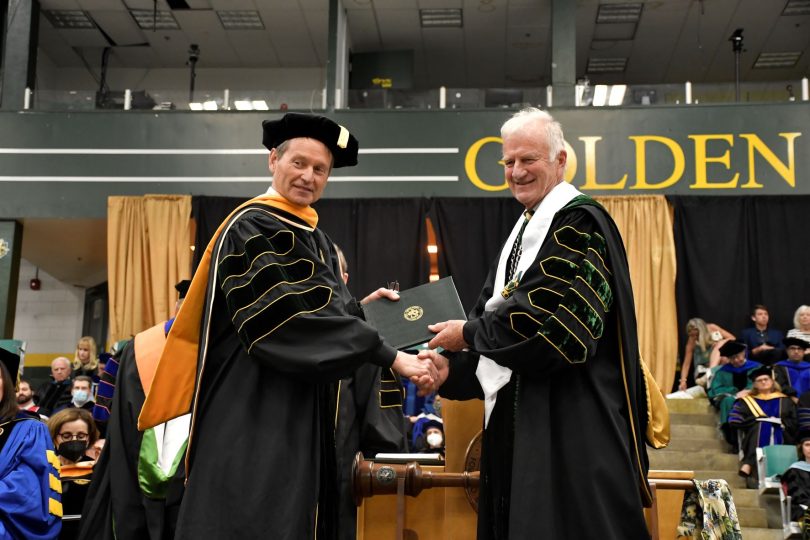 Sveinung Løset, professor of arctic marine technology at the Norwegian University of Science and Technology (NTNU) in Trondheim, was awarded an honorary doctor of science degree at Clarkson University’s spring 2022 Commencement on Saturday, May 14.

The degree was awarded for “his significant contributions to the study of sea ice, icebergs and icing, for his advocacy of societal environmental responsibilities in Arctic research, and for his steadfast mentorship of the next generation of researchers in his field.”

Løset spoke about the importance of science to the students. He told a story about the 1994 Olympics in Lillehammer, Norway, and how it was his job to get the fastest ice for the speed skating teams. That year 10 world records were set, but not without a lot of trial and error.

Løset told the students to, “be great and accept that you may not always reach your goals but you have done your very best and used your abilities. Be proud of yourself, you have succeeded in character.”

Løset, who has been at NTNU since 1995, serves as vice dean of research in the NTNU Faculty of Engineering. In addition, he is an adjunct professor at the University Centre in Svalbard and an honorary doctor of St. Petersburg State Polytechnical University.

He served as director of NTNU’s Sustainable Arctic Marine and Coastal Technology (SAMCoT), a center for research-based innovation, from 2011 to 2019. The vision of the center was to be a leading international center for the development of the robust technology needed by industry operating in the Arctic. The consortium comprised nine research partners, 12 industry partners and two public partners.

Løset is a pioneer in arctic marine engineering, which is based on an understanding of the physics and mechanics of ice combined with numerical modeling and physical experiments, both in the field and laboratory.

When offshore activities increased in the Arctic, Løset recognized the need for the research field of arctic marine engineering and established it in Norway. When he initiated his research in the late 1980s, there were no systematic observations and monitoring of the physical environment related to sea ice and icebergs in the Barents Sea.

Løset later served as the principal investigator of several expeditions to the Barents Sea and the Arctic Ocean.  Doctoral students assisted on most of these expeditions with Løset serving as the main supervisor for more than 25 of the students and co-supervisor of 20. Løset also conducted fieldwork in the ice-covered fjords of Spitsbergen with several hundred University Centre in Svalbard students at the master’s-degree level.

He has been a member and technical panel deputy leader of ISO WG8, an international standard for arctic offshore structures. Løset has published more than 75 international peer-reviewed journal papers and 190 international conference papers and the Petroleum Safety Authority Norway has widely used the findings of his research.

Løset is a recipient of Statoil’s Excellence in Research Award and the POAC (Port and Ocean Engineering Under Arctic Conditions) Founders Lifetime Achievement Award.

He received his Ph.D. in arctic marine technology from the Norwegian University of Science and Technology.