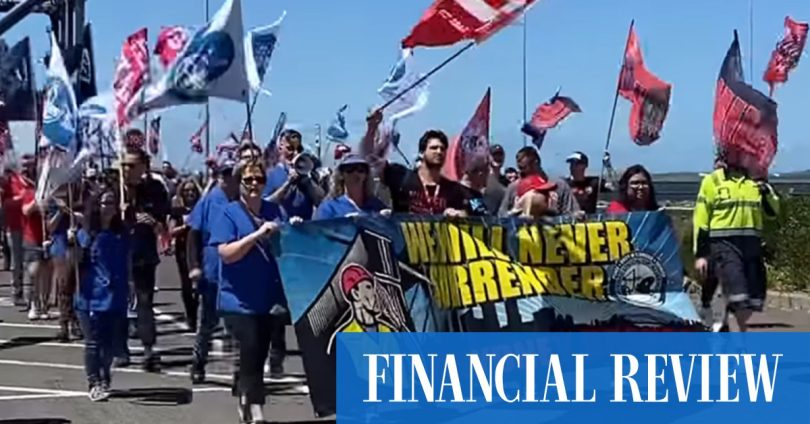 “That Svitzer, as we infer, has threatened an indefinite lockout of its employees, with full knowledge of the damaging consequences for the community which would ensue, in the expectation that this might bring about an end to bargaining via s 424(1), is a matter which, we consider, weighs against making a termination order that negates the bargaining rights of other parties under the Fair Work Act.”

The Svitzer lockout would have been the most consequential employer response action since the Qantas lockout of 2011, when the airline grounded all its planes in response to union industrial action, and the Gillard government intervened to seek termination orders.

But the bench, led by interim president Adam Hatcher, said the evidence in Svitzter’s case suggested its primary reason for locking out workers was “engineering a situation” to get termination orders.

It considered Svitzer had chosen to take “the most extreme action available to it” – an indefinite lockout of all employees at all ports – and three days before notifying the action had contacted an expert to prepare a report on the economic effects of an indefinite lockout.

The company told the expert of “an anticipated hearing” under s 424 and one of its executives eventually conceded in cross-examination that an s 424 application was discussed internally as a resolution.

Svitzer also argued in submissions to FWC that it was entitled to end bargaining “just as Qantas did”.

The bench said its powers to end industrial action were to protect the economy, not to bring to an end to “intractable” enterprise bargaining. It said there was enough evidence to suggest parties could still reach an agreement.

Svitzer wants to remove restrictive union conditions in its agreement that it says have cost it work and resulted in 130 job losses. However, unions have sought to hold on to what they argue are hard-won entitlements.

In a message to staff on Tuesday, Svitzer managing director Nicolaj Noes said the FWC orders to suspend industrial action on both sides for six months meant “we had a bit to think about”.

He said Svitzer’s without-prejudice offer, originally made in October but which unions allegedly walked away from, remained on the table and the company had also written to the union on dates for further meetings.

“I hope we get a fulsome, consolidated response soon and a recognition by the unions of our need to change and be more competitive as a business,” he said.

However, Mr Noes said the company remained committed to its case to terminate its agreement, which will be heard by the FWC on December 8, and would remove restrictive clauses if successful.

In his letter to unions, Mr Noes said, “from Svitzer’s perspective, we remain significantly apart”, and the company “was looking to the unions to demonstrate that this is not the case”.

“Please note that moving forward, we will no longer tolerate abuse, disrespect, swearing during bargaining meetings, and meetings will come to an end if any of this takes place.”

The FWC bench said if there was no outcome after six months it would “again be vigilant to ensure that any repetition of Svitzer’s regrettable threat of economy-damaging protected industrial action is not permitted to come to fruition”.

The Albanese government, which argued the FWC should terminate the action but was open to suspension, has proposed greater arbitration powers of intractable bargaining disputes in its Secure Jobs Better Pay bill.