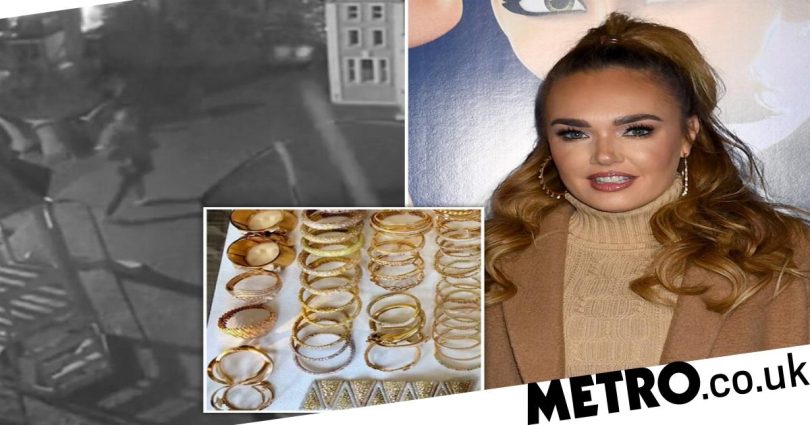 To view this video please enable JavaScript, and consider upgrading to a web
browser that
supports HTML5
video

A burglar who stole more than £20million in cash and jewellery from Tamara Ecclestone’s high-security mansion was finally identified by police – because he sent an unsolicited dick pic.

The Formula One heiress’s home on an exclusive London street dubbed ‘Billionaire’s Row’ was targeted by thieves in December 2019, as detailed in BBC Three documentary Who Stole Tamara Ecclestone’s Diamonds?

They successfully swept the Kensington house clean of luxury and unique jewels, many of which had sentimental value, while the reality star and socialite was on holiday with her family.

Despite the round-the-clock security, the three criminals were able to sneak into the 38-year-old’s garden, hiding behind her children’s Wendy house before sneaking in via a slim window.

All of Tamara’s 57 rooms – which were locked – were wrenched open with a crowbar while the trio ransacked the property, estimated to be worth £70m, in search of precious gems.

However, while they had images of the thieves, and had traced them to a hotel in St Mary Cray in Southeast London, officers had no clue who they actually were.

As the documentary explosively reveals, the investigators got a massive break – thanks to a dick pic.

The hotel had supplied a number for guests for emergency use late at night and, as journalist Alexandra Jones explains, instead of ‘laying low’ one burglar made a very offensive error.

‘He does this typical creepy guy thing and sends a dick pic to this iPhone,’ Alexandra adds.

‘The receptionist saw it, blocked the number and saved it as “weirdo”.’

As well as sending the disgusting image, the suspect checked into his room with his identity card.

His name, coupled with the phone number, meant police were able to track the criminal, an Italian national named Jugoslav Jovanovic.

Jugoslav Jovanovic pleaded guilty to conspiracy to burgle, conspiracy to commit money laundering and one count of attempting to convert criminal property at Isleworth Crown Court in November, when he was aged 24.

Alessandro Maltese, 45, and Alessandro Donati, 44, also admitted a plot to carry out the burglaries in west London, with all three given prison sentences.

Opening up about the long-term affects of the theft, Tamara told programme makers: ‘They are disgusting. I just finding it sickening that people are such low lives.

‘Having seen their faces, it’s kind of haunting in a way. They look f*****g beyond.

‘Knowing that kind of person has been roaming around your house and helping themselves freely to my most treasured, valuable possessions is just a horrible feeling.’

Who Stole Tamara Ecclestone’s Diamonds? is available to stream now on BBC iPlayer.

If you’ve got a celebrity story, video or pictures get in touch with the Metro.co.uk entertainment team by emailing us celebtips@metro.co.uk, calling 020 3615 2145 or by visiting our Submit Stuff page – we’d love to hear from you.