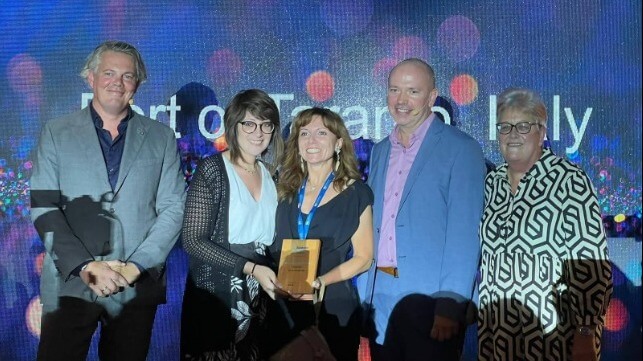 The Winners of the Seatrade Cruise Awards, the most prestigious awards in the cruise industry, were announced two nights ago, thus revealing the victory of the port of Taranto as Destination of the Year. Raffaella Del Prete, General Manager of Taranto Cruise Port, part of the Global Ports Holding network of ports, and Cristina Carriere, representative of the Port Network Authority of the Ionian Sea, jointly accepted the award.

The ceremony saw the participation of many important representatives of the cruise industry, gathered in the city of Malaga to attend the Seatrade Cruise Med . The judges of the Seatrade Cruise Awards, made up of an independent panel of experts from all over the world, chose the winners from the approximately 120 applications received for the various categories present, highlighting remarkable new innovations, technologies and projects and honouring key personalities that have made an outstanding contribution to the industry.

In the Destination of the Year category, the port of Taranto was a finalist along with two other brilliant cruise realities, the Croatian City of Dubrovnik and the Cruise Britain Port System.

“This Award is a significant recognition of the development work of the destination carried out by Taranto Cruise Port in synergy with the Port Authority and the support of local institutions – says Raffaella Del Prete, General Manager of Taranto Cruise Port – We welcome this victory with pleasure, sure that our enthusiasm will lead us to persevere in our commitment to highlight what, to all intents and purposes, has proved to be Taranto: a destination beyond imagination.”

“The real protagonist of this result – says Sergio Prete, President of the Port Network Authority of the Ionian Sea – is the Ionian port and territorial community which has welcomed cruise calls with great passion as an opportunity to relaunch and enhance the tourist vocation of this area. Thanks to the shipownerswho have chosen to include the Port of Taranto in the itineraries of their ships and in particular to MSC Cruises.”

With this important recognition, the Taranto Cruise Port strengthens its brand as a destination of excellence in front of the international public, distinguishing itself for the exponential growth of cruise tourism in the last year and for the scheduling already in place for the next two years, as well as for the important green transition projects aimed at transforming the port area into an increasingly eco-sustainable reality.

The products and services herein described in this press release are not endorsed by The Maritime Executive.