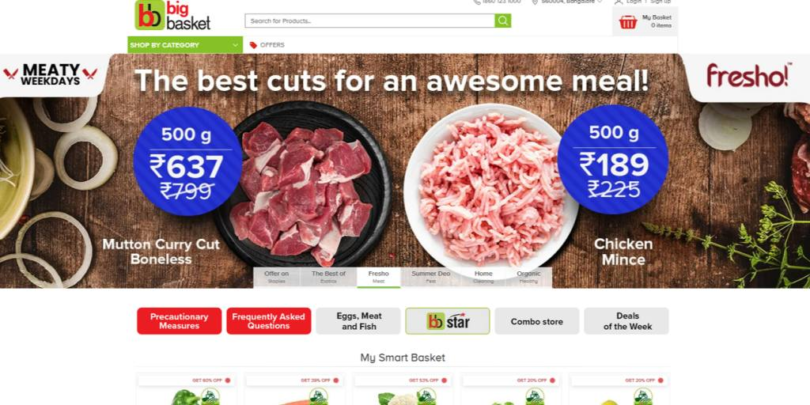 
TOKYO — Tata Group has hit the accelerator on its expansion into digital services, as lndia’s biggest conglomerate seeks to make up for lost time in a shift from heavy industry like cars and steel.

Tata Digital did not announce the value of either deal, but it reportedly paid 95 billion rupees ($1.3 billion) to acquire up to a 64.3% stake in BigBasket from top shareholder Chinese e-commerce giant Alibaba Group Holding and other investors

Flipkart and Amazon.com dominate Indian e-commerce, together holding a roughly 60% market share. But the fast-growing field offers plenty of room for other players. Online sales are expected to make up 10.7% of India’s retail market in 2024, up from 4.7% in 2019, the India Brand Equity Foundation says.

BigBasket and 1MG have grown substantially during the pandemic as more Indian shopped from home. BigBasket’s revenue surpassing $1 billion in 2020. Statista reports that BigBasket accounted for over 35% of India’s online grocery sales in 2019, outpacing rivals like Grofers, in which Japan’s SoftBank Group holds a stake.

BigBasket’s delivery hubs and inventory management let the company provide swift deliveries in over 20 cities. Depending on the item, you can receive your order the same night, a customer in Mumbai said.

The conglomerate’s dependence on earnings from heavy industry has become a concern in recent years. Tata Motor booked a net loss of 134.5 billion rupees for the 12 months ended in March, its third straight annual loss.

The group debuted Tata Digital in 2019 to bolster its consumer-facing digital services, an area it had put on the back burner. India’s Care Ratings said in May that Tata Digital’s “revenue-generating operations have not yet commenced.” But that is expected to change with the BigBasket and 1MG acquisitions as well as the appointment of former Flipkart executive Mukesh Bansal as president, announced on June 7.

Tata is working to expand its limited digital ecosystem through the new deals, said Sanjeev Kumar, a forecast analyst at Forrester Research.

Indian billionaire Mukesh Ambani’s Reliance Industries also has set its sights on e-commerce. The group debuted online grocery service JioMart in May 2020 and announced the acquisition of online pharmacy Netmeds that August.

Both Tata and Reliance, which have conventional retail operations in areas such as supermarkets, likely anticipate synergies with their ventures into e-commerce. Whether the two will be able to put pressure on Flipkart and Amazon will depend on how effectively they can marshal their broad business portfolios.