GM Nils Grandelius couldn’t keep his lead at the Tata Steel Chess Tournament. In the seventh round, the Swedish grandmaster lost to GM Anish Giri, who is now in shared first place together with co-Dutchman GM Jorden van Foreest as well as GM Fabiano Caruana and GM Alireza Firouzja.

It was an excellent day for the Dutch chess fans, who saw both participants from the Netherlands reach first place. For a few minutes, they were the only leaders, but Caruana soon joined them and, at the end of the day, Firouzja as well.

It brought up the question when was the last time that two Dutch players were sharing first place halfway through a tournament. That’s actually hard to research (our readers are more than welcome to share their knowledge here), but the last time two Dutch GMs won together was in 1981: GM Genna Sosonko and GM Jan Timman. (Before that, it was in 1958 when GMs Max Euwe and Jan Hein Donner tied for first.)

The Dutch success story started with Van Foreest scoring his second victory in the tournament. With the black pieces, he defeated Norway’s GM Aryan Tari and was very happy with that win.

“In this tournament no win comes easily, but especially with the black pieces, it’s very hard to win a game,” said Van Foreest. “I’m feeling very happy and very satisfied with my play as well.”

It seems Tari wasn’t fully ready for his opponent’s sideline in the Ruy Lopez: 4…Bc5 together with 5…Nge7, a specialty of Israeli GM Tamir Nabaty. The decision to trade bishops on a7 and push d6 didn’t give White an advantage, and Black got the upper hand when Tari played his king’s bishop to c2.

Van Foreest was surprised about that (“It’s quite nice on b3”) and liked his position when he could push his f-pawn. Just three moves later, White was lost as all the tactics worked against him.

The next winner was Giri, who brought down the tournament leader. From an opening theoretical perspective, it was interesting that the players followed one of the main lines for Black in an online course on the Najdorf recently published by Giri.

Even so, both players thought for about an hour on alternative options before the game really took off. “That was very nice because by the time we started playing, it was already like a rapid game, and with the time pressure it was difficult for him,” said Giri.

About the endgame, Giri said: “I felt like he should hold, but I didn’t see how.” Helped by the engine, our annotator, GM Dejan Bojkov, found a better defense for Grandelius:

Caruana was the third player to reach 4.5/7 after beating GM Maxime Vachier-Lagrave in the second loss for the Frenchman. Incidentally, this Caruana-MVL pairing is the exact same pairing for the next (eighth) round of the FIDE Candidates Tournament, now scheduled to resume in the second half of April.

Vachier-Lagrave got his second Najdorf Poisoned Pawn in the tournament and was surely ready for the move 10.f5 that Grandelius played two rounds ago. Caruana was the first to deviate, and  MVL again failed to remember the best way to counter it.

“I think Maxime wasn’t familiar with this old line 10.Be2 or maybe he had something prepared because this is his main opening and he couldn’t recall it at the board. Things went wrong for him quite quickly.”

10.Be2 has been a bit of a specialty of Dutch GM John van der Wiel, who played it in the early eighties, and it was picked up by none other than GM Mikhail Tal, among others.

Here, Caruana spent no less than 33 minutes on the clock, but they were well spent. He found the killer move 14.e6!!—a blow Vachier-Lagrave never fully recovered from.

A few hours later, Firouzja was the last player to reach the top of the standings. After losing to GM Magnus Carlsen, he has now surpassed the world champion on the leaderboard.

It was GM Jan-Krzysztof Duda who miscalculated an “antipositional” recapture by his opponent that cost him an exchange. From that moment it was a long and tough struggle for the Polish GM. In the end, he collapsed as Firouzja played the endgame strongly.

“It was a very difficult endgame to convert,” said the winner. “He sacrificed a bishop for these three pawns, and it’s very interesting. I think he had chances to make a draw, but it was very difficult, at least in a practical game.”

GM Andrey Esipenko started with six draws but today also won his first game, against GM  Radoslaw Wojtaszek. The tactic on move 19 was lovely, and the knight move to a1 was highly creative as well, although it actually gives away Black’s slight edge. Wojtaszek, however, got confused and lost a pawn for nothing.

As mentioned, Carlsen drew yet again (see the game viewer below). His opponent, GM Pentala Harikrishna, summarized it as follows:

“Actually I prepared something, and I played something else. I do not know if the 13…c4 is the right way, but I believe that it should be equal because almost any rook endgame with one pawn down should be not very difficult to hold. I just had to calculate one trick, which actually happened in the game, so I was not really worried when I managed to get this position. The e6-pawn looks nice, but it’s not going anywhere.” 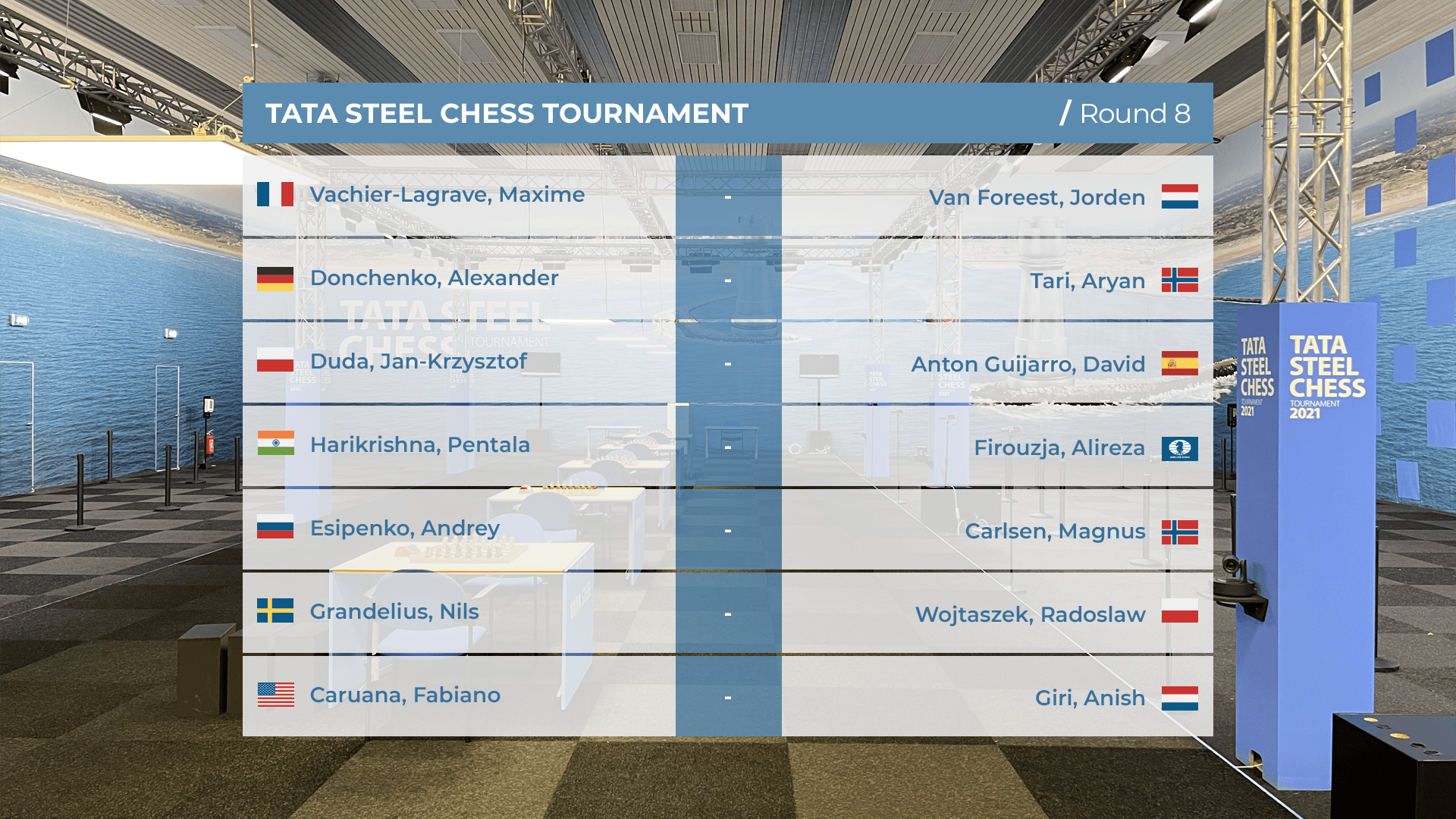