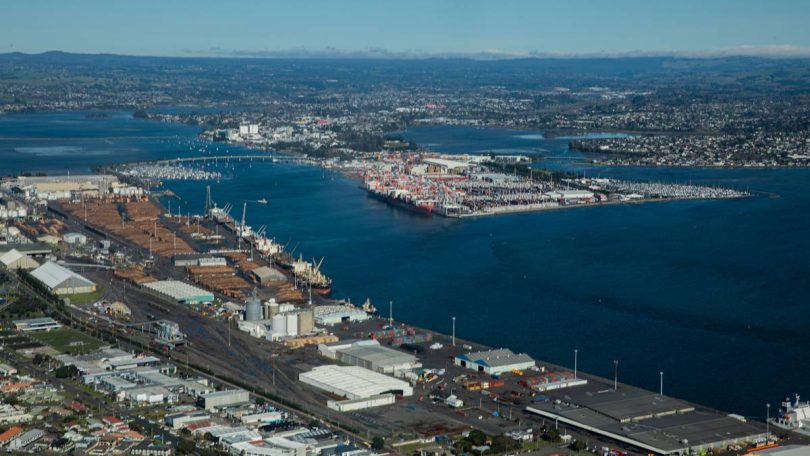 Aerial view of the Port of Tauranga. Photo / Mead Norton

Tauranga’s new MP is calling on the Port of Tauranga and local iwi to come to an agreement on how the port can expand.

Sam Uffindell wants the expansion to happen urgently, saying the port has little more than two years of capacity left.

But the neighbouring marae says doing so would harm its community even further.

Whareroa Marae sits at the edge of Tauranga Harbour, encircled by an industrial area that’s crept up to its back fence.

On one side there’s the airport, on the other a motorway, and out back, the Port of Tauranga and a tank farm.

Whareroa Marae environment spokesperson Joel Ngatuere said his community – and the harbour – were being made very sick, and blamed emissions from the industrial area.

“We know that we’ve had two of our kaumatua that have died from related symptoms from exposure to these chemicals. The other end we’ve got kids that are having asthma attacks, we’ve got people getting sore eyes, throat, mouth, we’ve got people struggling to breathe. We’ve got high respiratory problems,” Ngatuere said.

Last year, the marae called for a managed retreat of heavy industry from the area.

In 2019, the air quality over the Mount Maunganui industrial area was classed as polluted and a working group set up to look at how to improve it.

But the Port of Tauranga is still looking to expand and that has ahi kaa of Whareroa Marae worried.

“They already know that we are struggling and fighting for our survival, yet they’ve gone ahead and they want to push ahead and bring ships within 200 metres of our marae.

“So if we look at what impact is that going to have on us, it’s not just our health. You know, it’s cultural genocide,” Ngatuere said.

Already one of the country’s biggest, the Port of Tauranga has applied to dredge 1.8 million cubic metres from the harbour floor, and extend its wharf by nearly a kilometre.

It also wants to reclaim five hectares of land at Sulphur Point.

Bay of Plenty Regional Council, in a state of the environment report, says there has been a noticeable decline in kaimoana in the harbour.

“Lots of horse mussels which were prevalent around here are gone, scallops gone, and in addition, a lot of the traditional pipi beds are gone now,” Stanley said.

The Port of Tauranga declined to comment, saying it was waiting on its resource consent process currently before the Environment Court.

Stanley said he had been trying to negotiate with the port company for six months, with no success.

“I think there’s a way through it where we can get a monitored process working on side of both the port and ourselves but we’ve got to enter this fully and wholesomely. And in this moment in time, our end are saying I’ve tried for six months to try and resolve this and keep it out of court and try and resolve it in the background and nothing’s come about. So okay, let’s take the gloves off and start scrapping.”

Earlier this month, Stanley wrote to the board of Port of Tauranga threatening to take the matter to the Waitangi Tribunal if grievances were not resolved.

He also would not rule out a possible blockade of the country’s busiest port.

Rawiri Waititi, MP for Waiariki which covers Tauranga, said he would back that.

“If it goes ahead that is just total disregard for the mana of tangata whenua. If we go to Article 2 [of the Treaty of Waitangi] where we were to be undisturbed of our estates, of our rivers, of our oceans, of our mountains and of our land and of our taonga – 2022 and we’re still breaching the contract that validates for these systems to be able to operate here in Aotearoa.”

Meanwhile, Tauranga MP Sam Uffindell is encouraging both sides to come to an agreement.

He urgently wants the expansion to get under way.

“It’s got about two-and-a-half years capacity left. It takes two years to build that third berth so we need to speed up the process to make this happen. We need this to proceed not just for Tauranga and the region but for the country,” he said.

The Port of Tauranga declined to comment on Ngāi Te Rangi’s letter.

Submissions on the proposed expansion closed on Friday and a date for the Environment Court hearing is yet to be set.