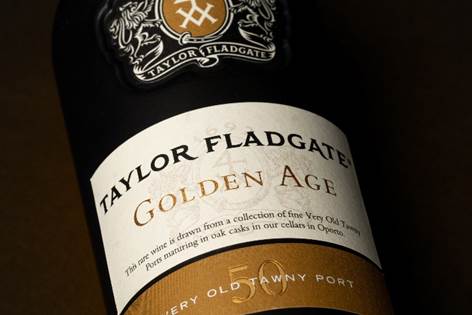 “Since we launched the first 50-year-old Taylor Fladgate Single Harvest Ports nearly a decade ago, we’ve seen growing interest in exceptional wines that are half a century old,” says Adrian Bridge, Managing Director of Taylor Fladgate. “Taylor Fladgate Golden Age is a wonderful wine that is the perfect gift for a special occasion and will deliver incredible pleasure when enjoyed with close friends.”

The long aging in wood gives the characteristic amber color, a nose full of complex and rich aromas and smooth, mature flavors. Taken from the magnificent Port wine reserves that Taylor Fladgate patiently and masterfully ages in its cellars, this wine is a monument to time and the art of aging in wood.

Taylor Fladgate cellars are true cathedrals of wine, built several hundred years ago; they provide the perfect conditions for long-term aging of Port Wine. With thick granite walls and very high ceilings, they maintain a steady low temperature throughout the year. An important influence is also the cellars’ proximity to the Douro River and to the Atlantic Ocean, which provide the necessary humidity for good aging, as it limits the rate of evaporation. This evaporation, key to the excellent aging of Tawnies, causes the development of a black mould on the cellars’ roof tiles, which gives the roofs their characteristic black appearance.

“It is in tawnies that a Port taster demonstrates the fine art of blending,” says David Guimaraens, winemaker at Taylor Fladgate. “To build a 50-year-old Tawny, we started from components of old wines, which were left – at least – by the generation that preceded us, but we also have the great responsibility of leaving the base wines for the generations that will follow us. Taylor Fladgate Golden Age 50 Years stands out for its extraordinary quality and complexity.”

Taylor Fladgate is one of the first historic Port Wine houses, having been established in 1692. As a family company since its foundation, it specialises solely in the production of the highest quality Port Wine, from the planting of the vines to the production, ageing and bottling of the wines. The family has shown its commitment to the future of Port Wine in its determination to protect the unique nature of the Douro Valley region, by promoting responsible and sustainable viticulture. The company is best known for its elegant and long-lived vintage ports, which are amongst the most sought-after and collectable, coming from the famous Quinta de Vargellas vineyard and two others: Terra Feita and Junco. The house created L.B.V. (Late Bottled Vintage), a style which the company pioneered and of which it continues to be the principal producer; it also pioneered Dry White Port when it invented Chip Dry, and also launched the first Single Quinta Vintage Port. Taylor Fladgate is also recognized as the most important producer of Aged Tawnies and possesses one of the most extensive reserves of Port Wines aged in cask.

Founded in 1944, Kobrand Corporation remains one of the few family-owned wine and spirits companies in the United States. Kobrand’s portfolio was meticulously selected according to a single, unerring principle: quality. This continued focus has made the Kobrand name synonymous with wines and spirits of the highest caliber for 75 years. Kobrand is the exclusive agent for an outstanding selection of fine wines, spirits, and sakes from key regions around the world, including the United States, France, Italy, Spain, Portugal, Germany, Japan, Chile, Argentina, and New Zealand. For more information about Kobrand and the portfolio, visit http://www.Kobrandwineandspirits.com.