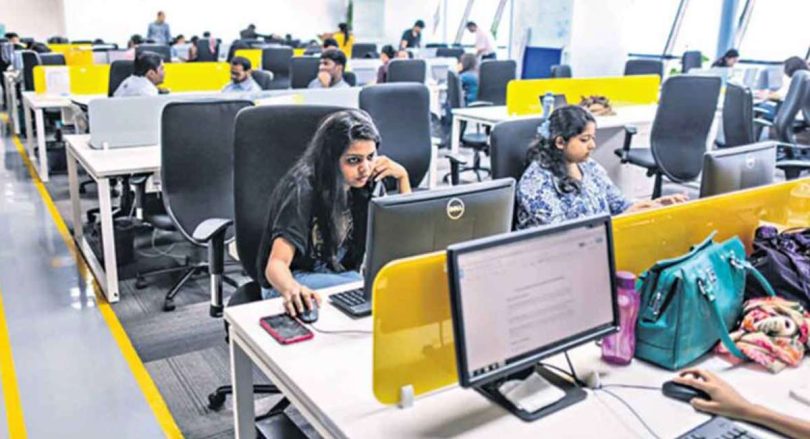 State’s top performance in the IT sector is being noticed far and wide. India Tech & Infra, which tweets industry developments, put out a post asserting Telangana’s good show in the sector. As per the tweet, Hyderabad (in first place) and Bengaluru both combined have created more than three lakh new jobs.  Mumbai came in third place with 54,000 jobs, Pune fourth with 40,500 jobs and Chennai fifth with 22,500 jobs. Delhi NCR and Tier 2 cities created over 31,000 jobs, it said quoting Quess IT Staffing report.  The tweet has since been liked by over 4,600 people. The twitterati was effusive about the measures being taken by Telangana to get new investments.

According to the IT and Communications department, the total employment in the IT/ITES  sector in Telangana is now close to 7.8 lakh in the State. The growth rate in job creation has been around 24 per cent over 6,28,615 in 2020-21. Telangana IT/ITeS employment witnessed an impressive 140% growth since 2013-14. The addition of more than 1.53 lakh jobs during 2021-22 is the highest in a single year since Telangana came into being, IT and Industries Minister KT Rama Rao had said earlier.

The State achieved these growth numbers despite the pandemic for two years in succession. Also, earlier an ITIR was sanctioned to Telangana but has been aborted. If ITIR was sanctioned, the growth would have been more stellar. As per the earlier ITIR estimates, the IT exports for the united state of Andhra Pradesh were supposed to reach Rs 2,09,221 crore by 2035. Going by the progress rate, Telangana IT exports will cross the projections by 2025 despite no ITIR support.  Telangana is also on course to achieve Rs 3 lakh crore exports and 10 lakh jobs, the target it set in the 2nd ICT Policy 2021-26.

Telangana’s effort of developing plug-and-play space in Tier II cities has borne fruits.  IT towers in Warangal, Karimnagar and Khammam are doing well.  IT Towers in Nizamabad (50,000 sqft), Mahabubnagar (60,000 sqft) and Siddipet (1,21,600 sqft) are nearing completion. Foundation stone has been laid for a similar facility in Nalgonda.

Telangana Government gives special incentives for companies that expand or set up their units beyond the western part of Hyderabad under its Growth in Dispersion (GRID) policy.  The Government is creating an IT Tower at Kandlakoya in the northern part of the city. Eastern part of the city (Uppal and Pocharam) is already being favoured by some companies.  Recently, Genpact used the GRID Policy to announce the creation of 15,000 seats (Phase-II) in Uppal.

Startup ecosystem builders like T-Hub and WE Hub have provided quality incubation support to many startups, which are a key part of the tech ecosystem. Hyderabad houses more than 1,500 IT and ITES companies. The State has 53 IT SEZs. Hyderabad is home to marquee brands like Google, Microsoft, IBM, AMD, Micron, SAP, Infosys, Cyient, Amazon, Intel, Qualcomm, Uber, Facebook, TCS, HP, Apple, Deloitte, Accenture, GE, Dell and Hyundai and a host of others.

Now you can get handpicked stories from Telangana Today on Telegram everyday. Click the link to subscribe.