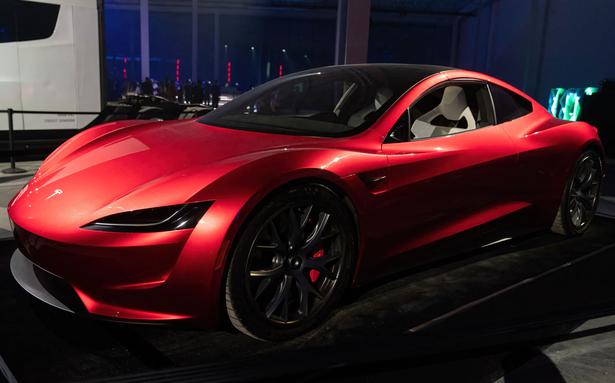 The story so far: Dashing hopes of Tesla enthusiasts in India, Elon Musk — CEO of the automotive giant — stated on May 28 that his company will not manufacture its electric cars in India unless it is allowed to first sell and service them locally.

Mr. Musk, who recently offered to buy the micro-blogging site Twitter, informed a Twitter user that he was awaiting the Indian government’s approval for launching Starlink – a global broadband internet system. When another Twitter user asked when he would set up a Tesla manufacturing plant in India, Mr. Musk shot down hopes citing the sales snag.

Indian car enthusiasts have often questioned Mr. Musk on Twitter about when Tesla cars will be made available in the country, but the Central government has firmly stated that the automotive giant must not ‘import cars from China’. Mr. Musk has repeatedly highlighted India’s high import duties on vehicles as the biggest snag for Tesla, opting for Indonesia instead of India to set up his new manufacturing hub.

In 2018, Tesla set up its first overseas car manufacturing hub, called Gigafactory 3, in Shanghai, China. It started production less than a year after construction began at the site in October 2019. As of 2021, this factory reportedly had a production capacity of 500,000 cars per year and could produce up to 450,000 total units of Model 3 sedans and Model Y crossover cars in the same time frame.

According to a calculation by Reuters using data from the China Passenger Car Association, cars produced at Tesla’s Shanghai factory accounted for half of the 9.36 lakh cars it delivered.

With the resurgence of COVID-19, Shanghai was forced to stall production in April 2022. According to a Reutersreport, local authorities in Shanghai’s Lingang Special Area helped transport more than 6,000 workers to restart production in Tesla’s Shanghai plant. The plant reopened on April 19 after being shut for 22 days, the longest period of time it has remained shut since the factory commenced operation in 2019.

Per a China News Service report, Tesla has also begun expanding its plant to add an additional annual production capacity of 4.5 lakh cars, taking the Gigafactory’s annual capacity to 1 million vehicles. In May 2022, Reuters reported that Tesla may open a new plant, with plans to produce up to two million cars per year at the expanded Shanghai factory.

With an eye to expand his foothold in Asia, Mr. Musk was looking to set up Tesla factories in India or Indonesia. In January 2022, the Karnataka government welcomed Musk with open arms to start Tesla’s electric car production activities in India. Speaking to the Hindu, Karnataka Minister C.N Ashwath Narayan pointed out that Tesla had already set up a research and development facility in Bengaluru, in January last year. “Whenever Mr. Musk is ready to set up a manufacturing facility in India, Karnataka will be happy and keen to offer him our fullest cooperation and support.’‘

Similarly, Telangana minister K.T.Rama Rao tweeted an invitation to Musk stating, “Will be happy to partner with Tesla in working through the challenges to set shop in India/Telangana.’‘ Apart from Karnataka and Telangana, ministers from Maharashtra, Punjab, West Bengal and Tamil Nadu too have invited Musk to set up Tesla plants in their respective states.

Hey Elon, I am the Industry & Commerce Minister of Telangana state in India

Our state is a champion in sustainability initiatives & a top notch business destination in India https://t.co/hVpMZyjEIr

In response, Mr. Musk has requested the Centre to withdraw its surcharge of 10 per cent on electric cars and sought a cut in import duty. But Union Transport Minister Nitin Gadkari has clarified that if Tesla is ready to manufacture its electric vehicles in India, it must not import cars from China. He added that the manufacturer must start manufacturing before he can avail any tax concessions in the country.

Addressing the Raisina Dialogue in Delhi on May 2, 2022, Mr. Gadkari said, “If Elon Musk [Tesla CEO] is ready to manufacture in India then there is no problem. Come to India, start manufacturing, India is a large market, they can export from India”.

With no breakthrough in import duty or surcharges, Mr. Musk met with Indonesian President Joko Widodo to set up a manufacturing hub in Indonesia instead. Mr. Musk’s team and the Indonesian government have had talks on the possibility of a SpaceX rocket launch site in the country, but no deal has been finalized yet. Resource-rich Indonesia offers cheap labour and is home to one of the world’s largest deposits of copper, nickel and tin.

Tax hurdles for Tesla in India

Last year, Tesla had written to the Road Ministry stating that the effective import tariff of 110 per centon cars with customs value above $40,000, is ‘prohibitive’ to zero-emission vehicles. The U.S. firm urged the Centre to reduce the import duty on electric cars to 40 per cent, irrespective of the customs value, and withdraw the additional 10 per cent surcharge.

It also argued that its proposal would not affect the Indian automotive market as no Indian original equipment manufacturer (OEM) currently produced a car with an ex-factory price — the selling price excluding of taxes — above $40,000. Tesla also stated that only 1-2 per cent of cars sold in India were of value higher than $40,000. This proposal has not been accepted by the Centre yet.

In comparison, China — which is the world’s largest automotive market ‑ has imposed a 15 per cent tariff on imported cars since July 2018, reduced from the earlier 25 per cent levied during the US-China trade war in June 2018. As Chinese President Xi Jinping and then-US President Donald Trump imposed retaliatory tarrifs on their nations’ goods, China had opted to imposean additional 25 per cent tariff on $50 billion in U.S. imports— which mainly include U.S. made autos and auto parts. After conciliatory talks between the two countries, the import duties were reduced.

On May 31, 2022, the Chinese government announced that it will reduce taxes on cars priced less than 300,000 yuan ($45,000) to 5 per cent from June 1, 2022 – easing taxation issues for Tesla and other major automotive manufacturers like Volkswagen and Nissan.

Similarly, in Indonesia – where Tesla is considering setting up to an auto plant — the government has announced a zero per cent tariff on imported electric vehicles to boost the nation’s battery-based electric motor vehicle programme for road transportation.