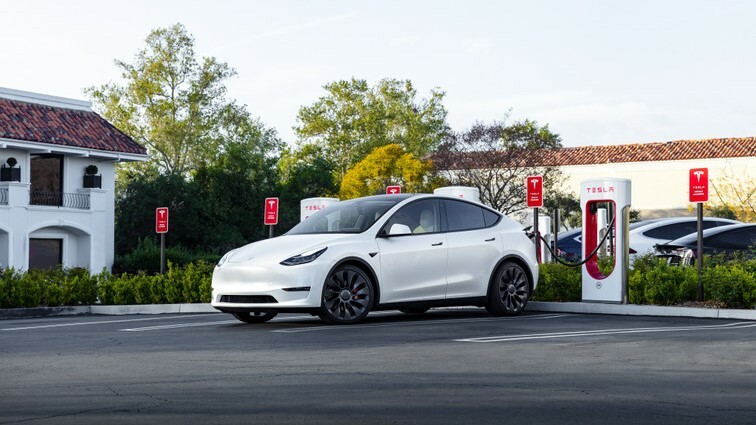 Tesla is making moves to dominate the EV charging space, announcing today that other car brands can now build vehicles with its proprietary charging port design.

This refers to the prong design at the end of the charger, as well as the plug the prongs feed into on the car. The charger’s prongs must match the car’s port—just like a lamp plugs into a wall outlet, for example—to successfully deliver power.

“We invite charging network operators and vehicle manufacturers to put the Tesla charging connector and charge port, now called the North American Charging Standard (NACS), on their equipment and vehicles,” Tesla says in a blog post(Opens in a new window), which includes a specifications sheet for download. “We are actively working with relevant standards bodies to codify Tesla’s charging connector as a public standard.”

There are a few types of charging plugs out there, though Combined Charging System (CCS) connectors have effectively become the national standard. Most, if not all, automakers besides Tesla use it on their vehicles.

President Biden even specified that a new national charging network must be built with CCS connectors. This type of standardization is key to universal access to public infrastructure, just like all gas-powered cars can fuel up at any station. You don’t have to look at a map to figure out which gas station works with your car, as you do now for EV charging stations.

Tesla argues that its NACS design is superior to the CCS, and that it’s the real national standard since Tesla has the highest share of the EV market and the largest charging network (for now).

“NACS vehicles outnumber CCS two-to-one, and Tesla’s Supercharging network has 60% more NACS posts than all the CCS-equipped networks combined,” says Tesla. “It has no moving parts, is half the size, and twice as powerful as Combined Charging System (CCS) connectors.”

Tesla’s post included a diagram showing the NACS plug is much smaller than the CCS.
(Credit: Tesla)

The move could be compared, hypothetically, to Apple allowing Samsung and other competitors to build mobile phones with its proprietary Lightning Port. Apple just did the opposite, though, and says it will eventually embrace the industry standard USB-C (after EU regulators demanded it).

Recommended by Our Editors

It’s unclear if Tesla considered building its new vehicles with CCS plugs. The company did, however, launch a home charger that works on non-Teslas last month. It also offers an adapter(Opens in a new window) for Teslas to charge at non-Tesla public charging stations.

The company is also supposed to open its Supercharger network to non-Tesla EVs, but the last we heard about that was in July, when the White House said Tesla would “begin production of new Supercharger equipment that will enable non-Tesla EV drivers in North America to use Tesla Superchargers…later this year.” Until then, that capability is only available in Europe(Opens in a new window).

As The Verge points out(Opens in a new window), the infrastructure bill that has allocated funds for the US charging network requires that companies build charging stations that support more than one type of EV in order to get any of that cash. So right now, Tesla doesn’t qualify.

Get Our Best Stories!

Sign up for What’s New Now to get our top stories delivered to your inbox every morning.

This newsletter may contain advertising, deals, or affiliate links. Subscribing to a newsletter indicates your consent to our Terms of Use and Privacy Policy. You may unsubscribe from the newsletters at any time.