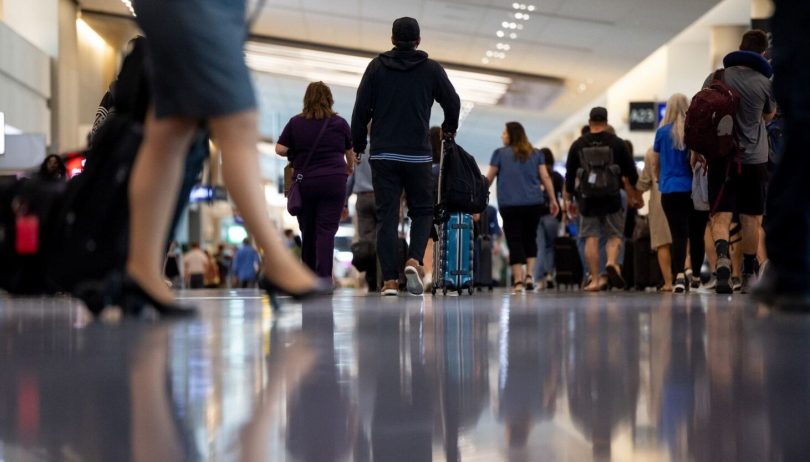 This holiday season figures to be “one of the busiest in recent history,” as air and ground travel begins to return to levels seen before the COVID-19 pandemic, according to AAA.

The association published its annual holiday travel outlook last week, projecting 55 million Americans will either fly or drive to a Thanksgiving destination this year. That includes 49 million traveling by car and about another 4.5 million flying for the holiday. If the outlook comes to fruition, it would be a 1.5% increase from last year and about 98% of 2019 holiday travel numbers.

“The upcoming holiday is projected to be one of the busiest for travel in the past two decades,” said Brian Ng, the senior vice president of membership and travel marketing for AAA Utah, in a statement.

Wednesday figures to be the busiest day on the roads in Utah and across the U.S. And while a small storm is forecast to pass through Utah Wednesday morning, the weather is not expected to factor heavily into Utah travel this week.

The Utah Department of Transportation projects Wednesday afternoon and early evening to be the busiest time for travel, especially on I-15. Drivers should expect:

Though post-Thanksgiving travel is expected to be spread out over the ensuing long weekend, UDOT also projects delays of up to 20 minutes near Cedar City on northbound I-15 from noon to 7 p.m. Sunday. Black Friday shopping may also result in busy streets, especially near malls and retail centers, the agency advises.

UDOT spokesman John Gleason said the agency will suspend all of its construction work to open up as many lanes as possible, as has been the case for other major travel holidays. However, there are some traces of construction work that may impact some lanes.

For those who rely on public transit, the Utah Transit Authority will run its normal schedule on Wednesday. There is no service on Thanksgiving Day Thursday, however, and the agency will run on its Saturday schedule Friday.

Gas prices down across Utah

Those taking to the roads will notice considerably lower gas prices from the summer holiday travel season, though prices remain a little over a quarter per gallon more than they were last Thanksgiving.

“This Thanksgiving will be about 20 cents higher than a year ago, and a dollar more per gallon than a pre-pandemic 2019,” Gross said in a statement on Monday. “However, we can be thankful that gas prices are moving in the right direction for now.”

AAA says the average price of a gallon of regular unleaded gas in Utah has finally slid under $4 per gallon, falling to an average of $3.97 statewide on Tuesday. Gas prices are generally cheaper along the Wasatch Front and central Utah this week, while they are more expensive in southern Utah and parts of northeast Utah.

Meanwhile, many Americans will take to the skies to travel this week. The projected 4.5 million flying for the holiday represents an 8% jump from last year.

This translates to an estimated 30,000 travelers coming through Salt Lake City International Airport’s front doors on Wednesday, alone — in addition to an unknown number of people reaching connecting flights at the airport. Nancy Volmer, airport spokeswoman, said the largest rushes are expected to be from 6:30 a.m. to 10:30 a.m. and 1 p.m. to 4:30 p.m. Wednesday.

This could lead to parking issues, as the airport ran out of parking spots during the 2021 fall break when nearly 30,000 passengers came through the airport that weekend. To combat this, airport officials are advising travelers to reserve their parking in advance, or ride UTA’s TRAX service that goes to the airport.

Alternate parking areas may also be opened up if the economy parking lot reaches full capacity, airport officials say. They add that travelers should plan ahead and know what’s allowed through security lines and what can be brought onto a plane as carry-on luggage, in advance, to avoid holding up lines.

Sunday also figures to be a busy day at the airport, as people either return back to Utah or return home after visiting the Beehive State. Volmer said another 30,000 passengers are expected to come through the airport’s front doors on the last day of the long weekend.