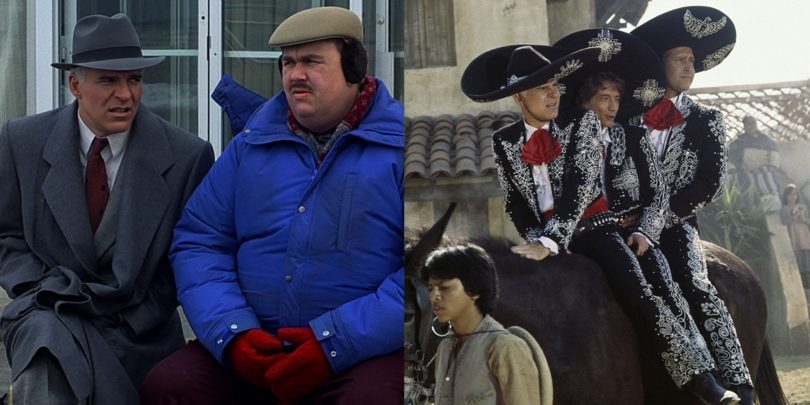 After becoming one of the most popular and influential performers in the history of standup comedy, Steve Martin transitioned into film work and made a similar impact in a different medium (and he’s since done the same in the realms of theater and literature). Martin has starred in countless fan-favorite comedies, from his pitch-black sci-fi satire The Man with Two Brains to his family-friendly Father of the Bride franchise to Roxanne, his romcom retelling of Cyrano de Bergerac. But the very best entries in his filmography, like The Jerk and Dirty Rotten Scoundrels, stand out from the rest.

In the late 1970s, when Martin had become a huge name in standup comedy, he plotted a transition to the big screen. He teamed up with screenwriters Carl Gottlieb and Michael Elias and director Carl Reiner to translate the delightfully offbeat tone of his standup act into a feature film. Hailed as one of the funniest movies ever made, The Jerk tells the epic saga of simpleton Navin R. Johnson, who moves to St. Louis to follow his dreams, works odd jobs like gas station attendant and carnival weight guesser, and eventually earns fame and fortune with his ludicrous invention of the “Opti-Grab” (a handle that keeps eyeglasses from slipping down their wearers’ noses).

Navin is caught in a love triangle between a typical girl-next-door romantic interest and a terrifying biker named Patty Bernstein. He’s targeted by a deranged sniper who picks out his name at random in the phone book and becomes transfixed on assassinating this “typical run-of-the-mill b*****d.” The Jerk isn’t beholden to a standard three-act structure; it’s just a collection of hilarious vignettes. This movie doesn’t set out to do anything more than make the audience laugh as hard and as often as possible.

During Lorne Michaels’ hiatus from Saturday Night Live in the early 1980s, he teamed up with Steve Martin and Randy Newman to write the script for ¡Three Amigos!, a charmingly goofy western spoof. Martin plays one of the titular amigos alongside fellow comedy greats Martin Short and Chevy Chase. They’re a trio of silent film stars who are mistaken for real heroes and tasked with battling banditos during a trip to Mexico.

The premise is stretched a little thin at feature-length, but the on-screen chemistry between the lead actors more than makes up for it. They knock every gag out of the park, from Martin and Short obliviously performing a rendition of “My Little Buttercup” in a saloon full of tough-as-nails gunslingers to Chase drinking a gallon of water in front of his dehydrated friends in the scorching desert before offering them Chapstick.

Scripted by Martin himself, Bowfinger tells a hilariously absurd tale of guerilla filmmakers using unscrupulous methods to mount a big summer tentpole. Martin stars as Bobby Bowfinger, a sleazy movie producer who embodies the tenet that it’s easier to beg for forgiveness than to ask for permission. He gets a major A-list star to appear in his rinky-dink low-budget production by staging the scenes around him while he goes about his day and secretly rolling his cameras from afar.

Eddie Murphy gives one of his greatest and most underrated performances in dual roles as paranoid action star Kit Ramsey, who’s convinced that Bowfinger’s movie is an alien conspiracy, and his dorky twin brother Jiff, who stands in for all his close-ups. The movie’s biggest laughs come from the ludicrous lengths that Bowfinger will go to in order to get his shots, from putting high heels on his dog to forcing a terrified Jiff to run across a busy freeway.

Frank Oz’s remake of the 1964 comedy Bedtime Story cast Martin in the Marlon Brando role and Michael Caine in the David Niven role. Dirty Rotten Scoundrels follows a suave con artist (Caine) and a small-time crook (Martin) who decide that their luxurious French Riviera town isn’t big enough for the two of them and enter into a wager to determine which one will leave.

The script extrapolates the duo’s elaborate cons for every possible laugh. When Martin poses as a disabled military veteran, Caine poses as an unorthodox doctor who promises he can cure his paralysis. As Caine takes a baton and smacks Martin’s knees with a running start, Martin desperately tries to conceal his agony. Dirty Rotten Scoundrels is a classic caper that moves from one hilarious gag to the next on its way to an ingenious twist ending in which both characters get their much-deserved comeuppance.

Written and directed by John Hughes, Planes, Trains, and Automobiles chronicles a nightmarish journey from New York to Chicago undertaken by a pair of woefully mismatched travel companions. In his first break from the high school comedy subgenre, Hughes rolled two other comedy subgenres into one. A hybrid of road movie and buddy movie, Planes, Trains, and Automobiles follows a three-day road trip during which two perfect strangers become the best of friends. Martin is perfectly matched with co-star John Candy, playing the frustrated everyman opposite Candy’s happy-go-lucky goofball.

There are plenty of hysterical gags along the way, from Martin’s expletive-laden tirade at the car rental place after being stranded at an empty parking space in the middle of nowhere to Candy’s lip-synced rendition of “Mess Around” by Ray Charles, but the movie is also surprisingly sweet. The story has a heartfelt emotional throughline. At the beginning of the movie, Del and Neal can’t stand each other. By the end of it, they’ve connected on a deep level and become close friends.