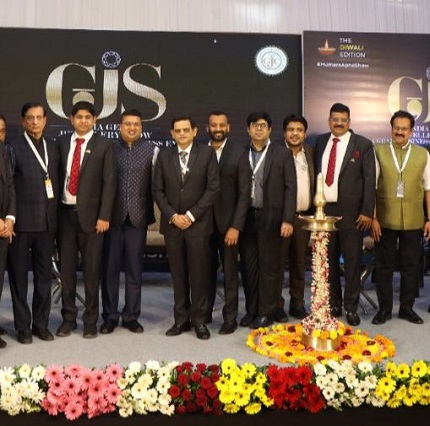 The Diwali Edition of the B2B GJS Expo was inaugurated yesterday by the Guest of Honour, Rajeev Garg, Joint Commissioner of Income tax and the apex industry body. This prestigious expo will be held from 22nd to 25th September at Bombay Exhibition Center (NESCO), Mumbai. Also present at the inauguration was Shri Ashish Pethe, Chairman, GJC,Mr. Saiyam Mehra, Vice Chairman of GJC and Convener of GJS and other distinguished members from the trade.

GJS has more than 400 exhibitors, spanning over an area of 2,00000 + sq ft area. The expo will also have interactive educational seminars & workshops on the various current & future trends by prominent players from the industry.

For years, this expo has been creating a conducive atmosphere for the retailers to explore various exclusive and trendsetting Jewellery from different culture & places. In this edition too it will encourage & facilitate strong business & commercial relationships catering to right customer during the onset of this festive season.

Rajeev Garg, Joint Commissioner of Income tax said “ I am very happy to be a part of this trade event. It’s been majorly seen that Indian jewellery is a family business & brands & trust are built and passed over through various generations. I have seen that Gem & Jewellery is considered to be the most cleanest & pious business in India. Indian Jewellery is also known for its range of craftsmanship, design & mastery world over. I wish this event becomes one more epitome of success and an important podium as a torch bearer for this and many more editions to come”

Expressing his gratitude to the exhibitors and buyers, Ashish Pethe, Chairman, GJC added “A show of this magnitude just before the commencement of the festive season is the need of the hour and we are happy that we could successfully organize it with the support of the exhibitors and visitors from across the world. I saw that this time exhibitors have come up with new and innovative products, especially for this festivities. I am hopeful that this edition will be a huge success & will set a new benchmark for the entire industry”

Saiyam Mehra, Vice Chairman of GJC and Convener of GJS, said, “In this new edition of the show, we are happy to fulfil the request of our trade members who have been demanding for an effective B2B show before the start of the festive season. I am sure the exhibitors and buyers will be highly benefited not only by the magnitude of this show but also by the upsurge in demand for gold & jewellery from India & globally, especially after the devastating pandemic & the beginning of the good times.

Nilesh Shobhawat, Co-Convenor,GJS added “ I am very enthusiastic that after months of preparations, we are all here set to present this glorious edition to the trade and visitors. Our focus was to design & deliver a platform for the fraternity which will re instil their confidence after the pandemic void. The idea was to make this show an apt marketplace for them for various exchanges ranging from new ideas, designs, strategies, trends & forthcoming plans

GJS comprises of top-of-the-line manufacturers & wholesalers of Gems & Jewellery as well as dealers from all over the industry. The show assembles the best retailers, wholesalers, manufacturers, traders, and delegates from across India. GJS is the ultimate sourcing platform for doing business and a must-attend event for every jeweller in the Indian market.